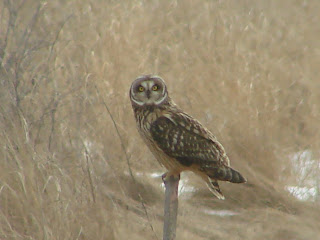 I attended a Short-eared Owl show. I was told that the show began in the early morning, but I did not join the show until two in the afternoon. I watched it until sunset.

When I pulled into the parking area, four people were staring across the barren salt marsh. Short-eared Owl, they told me. Across the ice and snow and broken grasses of the marsh, I saw a dark anomaly. With binoculars I saw the owl’s flat round facial disk. It was still there when I set up my scope and brought it closer with the long lens. It was eating. Then it took flight. In its beak it carried something limp and gray, probably a vole.

The flight was short and when it landed, it resumed its meal. The final remains of its prey disappeared in a single gulp. Then it flew to a stake and perched. From there it surveyed the lifeless looking marsh. Soon it would hunt again.

I wandered slowly, back and forth, along a mile and a half of the Parker River refuge road on Plum Island. Three Short-eared Owls were active along this short stretch. They provided a textbook study of this particular owl, and of life in a winter salt-marsh.

The winter salt-marsh never ceases to amaze me. It is a stark, forbidding landscape. The ponds are frozen. The tidal channels are rimmed with jagged chunks of ice. The reeds and grasses are battered, broken, flattened. Nothing breaks the wind as it sweeps across the open marsh, and the wind, laden with ocean moisture, penetrates. The heavy dampness chills. The winter salt-marsh is not a welcoming place. Forbidding is an appropriate adjective.

And yet ... there is life that goes on about the business of earning its living. In the tidal channels, Red-breasted and Hooded Mergansers dove. The drakes displayed for the hens. Gulls were in constant movement; often one could be seen dropping a mussel, using the hard ice to crack open the shell. Black ducks and geese grazed among the grasses. Robins went from berry bush to berry bush, feeding on the fermented fruit. A mockingbird, his mimicking song still silenced by winter, eyed me with interest and curiosity.

I could easily understand where these birds were finding their food, although I wondered why they might not find a more temperate place to winter. 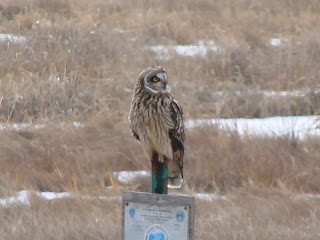 But consider the birds of prey. In addition to the three Short-eared Owls, I saw at least six Northern Harriers hunting over the marshes and dunes. Somewhere in the large expanse of the refuge, there were wintering Rough-legged and Red-tailed Hawks and at least one Snowy Owl. I did not see them, but there were almost daily reports of their presence. Small rodents make up most of the winter diet of these predators. These raptors may be adapted and accustomed to frigid conditions, but their survival still requires many calories every day. Each of these predators must hunt successfully several times each day.

The owls I watched were consistently successful. The Short-eared Owl is a bird of open spaces - tundra, marshes, grasslands. It is also the owl most likely to be seen hunting in daylight. Owls rely heavily on sound to find their prey. The circular facial disc of the Short-eared Owl acts like a dish receiver, capturing sound and funneling it to the ears. The ear openings are asymmetrical, allowing the owl to triangulate sound and locate its prey. The “short ears” of the Short-eared Owl are not ears, but small feather tufts which are not usually visible.

During the afternoon I watched the Short-eared Owl show. I saw it perch on the ground, camouflaged among the marsh grasses until suddenly it spread its wings for a short flight, landing on prey. Other times it perched on a stake, quite prominent on its elevated position. Its head turned one way, and the other. Then it was still, focused; it took flight - a short flight - landing on prey hidden beneath the snow and matted grasses. 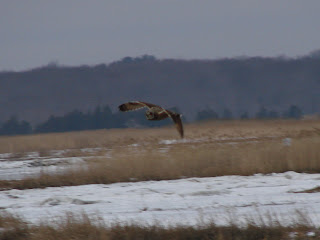 More commonly the Short-eared Owls hunted in flight, climbing and descending, floating nimbly over the marsh. At times they resembled the Northern Harrier , their wings held in a droopy dihedral, but quicker than the harrier. The harrier is a somewhat owl-like hawk with a facial disk to help it hunt by sound; in flight the harrier long and rangy. By contrast, the Short-eared Owl looks like a blunt battering ram, or as Pete Dunne puts it: “a pale beer keg on wings.”

The owls and the harriers did not share the air space willingly. There were frequent aerial dogfights between the Short-eared Owl and the Northern Harrier. Sometimes it looked to me as though the owl was the aggressor, as though it was protecting its exclusive hunting preserve. Other times the harrier made the first aggressive maneuver.

The owl, flying above the harrier, dove and swirled. The harrier rolled on its back, talons up as though protecting itself. But such aerial maneuvers are quick and the purpose not always apparent. I spoke with a photographer who had been watching and photographing the birds all day. He showed me an image where the harrier had rolled in flight onto its back. Visible also was the vole which the harrier had dislodged from the owl’s talons. He described the harrier following the vole to the ground, grabbing it, and flying off. One predator had stolen from another. It is no wonder that predators are often aggressive toward one another.

Hawks usually sit in the open and consume their prey slowly. Owls, on the other hand, try to avoid thieving competitors by swallowing their prey whole. Their digestive system then compacts the indigestible materials (fur and bones) into a pellet. An owl ejects one or two pellets each day. Beneath an owl’s favorite roosting spot there may be a pile of pellets. These pellets have been used by biologists to study diet and foraging patterns.

Like all predators, the Short-eared Owl will take what is available, and this may include a variety of small birds. But its distinct preference is for small mammals. Generally non-migratory, they nevertheless wander, usually in winter, to where the food sources are. When rodent populations explode, the Short-eared Owls somehow get the message and congregate. They have been credited with preventing significant agricultural losses from rodents.

Short-eared Owls are found on every continent except Australia. They have even found their way to the most remote islands on the planet, the Hawaiian Islands, where “Pueo” was worshiped as a god and guardian spirit. On a couple of occasions, I saw a Short-eared Owl hunting on the grassy slopes near the summit of Haleakala on Maui. 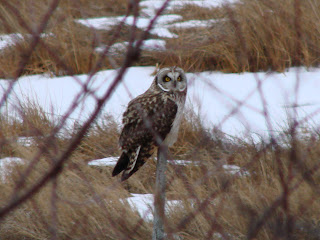 It is a curiosity to me that the diurnal raptors, the day-hunting hawks, eagles, and falcons, are often elusive and difficult to study. I see lots of hawks during the Fall migration on Putney mountain, but most are here-and-gone observations. On the other hand, the nocturnal owls have provided a number of extended and rewarding occasions. One of these was the show put on by three Short-eared Owls. They hunted from the ground, a perch, or in the air. They competed with harriers. They swallowed their prey in a single gulp.

The owls reminded me that the winter marsh may appear cold and lifeless. But it is alive with the struggles for survival - with the rhythm of death and of life. At fading light, I was cold, yet conscious that sometimes harsh conditions are necessary for good birding.

Email ThisBlogThis!Share to TwitterShare to FacebookShare to Pinterest
Posted by Chris Petrak at 9:18 AM
Labels: Short-eared Owl