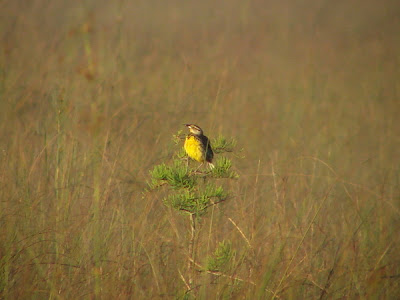 The river of grass stretched in all directions before us, broken occasionally by a cluster of shrubs or pines growing on a slight rise in the flat landscape. The sun had just risen above the horizon; its low rays cast a golden glow on the dry sawgrass.

With lowered windows, we crept slowly along the park road, the only ones out so early on the April morning. Distantly I heard a song greeting the sunrise: Wee’he See’ee you.

“Listen,” I said, and again the song traveled over the river of grass: Wee’he See’ee you. We looked at one another; together we said, “Meadowlark.”

We pulled over and climbed out, wondering whether we could find the maker of that ephemeral song: Wee’he See’ee you. It came from my left, but then another answered from the right, and yet another more distantly. I found him even before I raised my binoculars - a bright yellow spot atop a tiny bush in the sea of golden yellow grass. A plump Eastern Meadowlark, bright yellow breast with a black vee thrust forward, head and beak tilted upward, sang his “Spring of the year” song: Wee’he See’ee you.

I don’t see meadowlarks often. They are birds of grasslands and farmlands, and as the forest has reclaimed Vermont, the meadowlark has lost habitat. They are still found in the Champlain Valley, but the recent breeding bird atlas in Vermont did not confirm any nesting meadowlarks in Windham County. Standing on the park road in Everglades National Park and hearing their song from multiple directions was a treat. It cleared the last remaining night fog from the mind and left us without words.

The meadowlark is not a lark, though many think it sings like one, and that explains its name. It has sometimes been called meadow starling, because its shape, posture and behavior resembles that of a starling. But it is not a starling. The meadowlark is a blackbird, in the family, Icteridae, the family of grackles, orioles, bobolinks and even real blackbirds.

Like grassland birds, it hides its presence with its nondescript brown streaked back. It can be easily missed as it forages through the grass. When approached too closely, it bursts into flight, and then it might be identified by its stumpy, flared tail with white outer feathers. 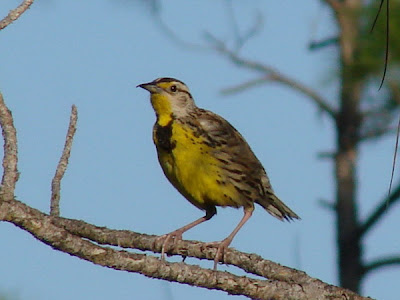 But then comes the spring of the year, and the meadowlark - the males - perch atop fence posts, a scrawny shrub, a utility wire, a bare branch, or any other elevated perch. The bright yellow breast with the black pendant vee becomes prominent, and the “high, plaintive, and somewhat wistfully whistled Wee’he See’ee you” (Dunne) carries across the hayfield, the pasture, the grassy plain, or on our April morning, the Everglades’ river of grass.

Early science thought the Eastern Meadowlark was, in fact, related to the starling, but beyond that there was little logic about the name assigned to it in 1758: Sturnella magna. Sturn comes from the Latin for starling; -ella from the Latin for little. Hence the genus name means “little starling.” The species name, magna, means large. So the meadowlark’s scientific name in translation means “large little starling.” I share this with you in case you were thinking that scientific names are intended to be descriptive or make sense. Under the nomenclature rule of priority, that we are forever stuck with the nonsense name.

Just to take the name situation a little further: the Eastern Meadowlark has a close relative known, logically, as the Western Meadowlark, since it tends to be a western species. Its scientific name is Sturnella neglecta, “neglected.” Audubon so named the Western Meadowlark in 1844 as a protest against the ornithologists whom he felt were guilty of dilly-dallying about the identify of this western bird.

Unlike so many of the blackbirds, the affection for the meadowlark seems almost always positive. When Audubon writes about the “Meadow Lark, or Meadow Starling,” he rhapsodizes for several long pages. “The prudent and enlightened farmer,” Audubon writes, “mindful of the benefit his meadows have received from the destruction of thousands of larvae, which might have greatly injured his grass, disturbs it not, and should he find its nest while cutting his hay, he leaves the tuft in which it is placed.”

In a similar vein, Bent’s Life History begins: “The meadowlark is the outstanding and the most characteristic bird of the American farm. It is revered by the farmer not only because of its charming simplicity and its cheerful, spirited song, but also for its usefulness as a destroyer of harmful insects and the seeds of obnoxious weeds.”

Unfortunately, modern farming requires several hay cuttings, which means early cutting, and employs large machinery with little chance to avoid the secreted ground nest of the meadowlark. Add to these challenges the abandonment of much farm land, the return of shrub and forest, and the conversion of farm land to suburban tracts. These factors all combine to make the meadowlark’s spring song a much less common one, and here in southeastern Vermont, an almost non-existent song.

It is challenging for the meadowlark in many parts of the east, but not bleak. A few weeks ago I took an early morning walk through Pennsylvania farmlands outside of Philadelphia. Housing developments are pushing hard against this countryside, but farming continues. Most fields already had their first hay cutting, so I was not surprised that Bobolinks were absent. Even so, from the far side of one pasture I heard the spring song of a meadowlark. A couple of days later I stood, as I try to do every year, in a coastal tidal marsh along the Delaware Bay. The song of the meadowlark floated through the air. 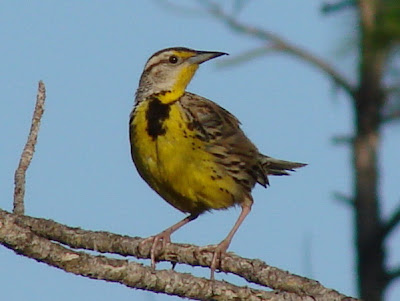 We returned to the Everglades very early the next morning, this time to walk a trail through an open southern pine forest. It was an area where turkey, bluebirds, and Brown-headed Nuthatch were beginning to become reestablished. We heard name calling Bobwhite, and turned a bend in the trail to see one strutting before us. But the real delight, again, was the singing of the grassland bird: Wee’he See’ee you ... “Wee’he See’ee you. All along the trail, meadowlarks were proclaiming their territory, defending their prerogatives, intent on the task of extending their species to the next generation.

One flew from the grass to a bare branch above my head. Briefly he paused and posed. His profile and beak looked like that of so many blackbirds. But his yellow chest glowed in the morning sun. He lifted his head and song poured forth - a song about the season, and the joy of life.

Email ThisBlogThis!Share to TwitterShare to FacebookShare to Pinterest
Posted by Chris Petrak at 7:00 AM
Labels: Eastern Meadowlark