What Is a Mississippi Kite Doing in New Hampshire? 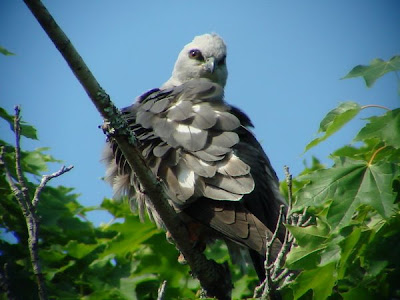 I was on a sidewalk in a small town in eastern New Hampshire. It was Main Street and residential. About a dozen people were standing around, looking up. They all had binoculars. There were several telescopes on tripods, and a couple of very serious cameras with three foot telephoto lens. Passing drivers craned their necks for a glimpse of whatever it was we were looking at. A trucker paused his rig, leaned out the window and asked, “What are you looking at?” A car stopped in the middle of the road, and asked the same question while three cars back the driver beeped impatiently. When another car stopped next to me and asked the question, I responded, “Mississippi Kite.” The look on her face was blank incomprehension. Had I said that there was a hot air balloon caught on an antenna, a cat stuck in a tree, or even an eagle soaring overhead, there would have been understanding. But a kite is a flimsy paper thing that kids try to fly on windy March days. What kind of paper kite is a Mississippi Kite, and why would a bunch of graying adults be looking at that with so much intensity?

Most of the question answering was done by the local birdwatcher who lived a block away. Her answer, “Mississippi Kite,” followed by definition and commentary, backed up traffic. So the next time a motorist stopped next to me, I answered, “A rare hawk,” and the satisfied driver moved along.

Calling the Mississippi Kite “a rare hawk” is barely accurate. “Kite” (from a Greek word) is a common name loosely applied to several kinds of medium-sized hawks. There are five “kites” seen in North America, none in the same genus. “Kite” does not refer to genetic relationship, but rather to physical and behavioral similarities. Most kites are slim birds; in flight they glide and soar gracefully, circling and swooping, somewhat similar to the way a paper kite on a string “flies.” The paper kite was named after the bird, not the other way around. 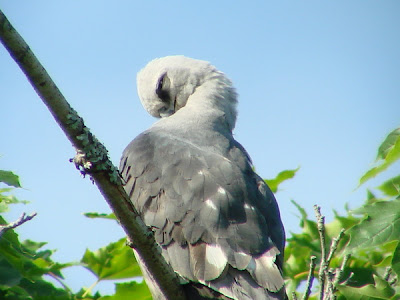 So, what is a Mississippi Kite doing in eastern New Hampshire? Apparently there are times when the Mississippi Kite on its northward journey doesn’t know when to stop. Or perhaps it gets a strong tailwind which keeps its going, or a storm which blows it north of its normal breeding range. Or maybe it just doesn’t read its range map in the bird guides. Whatever the reason, it is a regular vagrant in some areas far north of where it should be.

In the last half dozen years when I have made a Spring trip to Cape May, New Jersey, the Mississippi Kite has been present. One year I managed to see the bird. Four kites were flying high overhead - dark, pointed wing silhouettes, circling, soaring, and swooping, as they fed on dragonflies. Large insects make up most of its diet.

Mississippi Kites are also regularly reported in the Spring in southeastern Massachusetts, usually in the Cape Cod area. Presumably these birds eventually realize that they overshot their destination and return south. Or maybe they are young, nonbreeding birds out seeing the world.

So the first answer to the question: What is a Mississippi Kite doing in New Hampshire? - might be something like: they got lost, blown off course, or are tourists. But that hardly captures the excitement of New Hampshire birders when they first identified the bird, because there are no previous records of the Mississippi Kite being seen in New Hampshire. The first report posted two weeks ago hoped that they could somehow get three people to confirm the sighting, or some photographs - required for a fully documented state record.

That anxiety has vanished. Three Mississippi Kites are in the small town in eastern New Hampshire: an adult male, an adult female, and (apparently) a juvenile, or year old, female. They are breeding. In the top of a tall maple tree ten feet from the edge of Main Street, they have built a nest that (in Audubon’s words) “resembles the dilapidated tenement of the Common American Crow, formed of sticks slightly put together.” 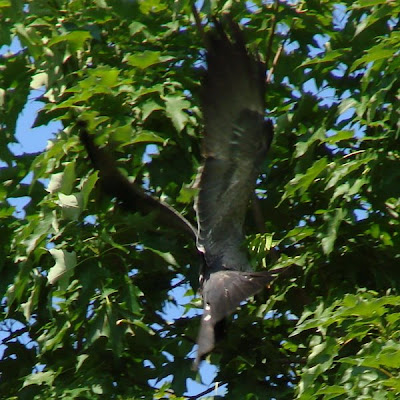 One week ago, a friend and I spent about two hours on the sidewalk across the street from the nest tree. We watched the male carrying sticks back and forth, eventually disappearing into the foliage with his nesting material. We saw the kite gracefully dipping and soaring high overhead. One of the females spent long minutes perched on a high bare branch, preening. In a more distant willow tree, one of the kites also preened.

In the rather brief time I spent watching the kites, it was not clear which female was the younger one, and the identity of the male (smaller than the female) was only clear when he copulated, which he did on several occasions. Observations reported in the last week seem to suggest that the male has copulated with both females and that incubation is occurring, but it is still unclear what the role of the younger female is. Is she a helper bird? Has she laid an egg in the nest? One or two eggs are the usual number. No one has yet suggested that there may be a second nest in the vicinity, though the Mississippi Kite often nests colonially. 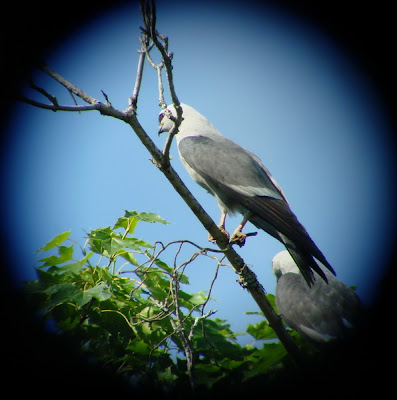 What is a Mississippi Kite doing in New Hampshire? The answer: it is breeding. But that still doesn’t explain how three kites came to be so far out of their normal range, nor why they decided to stay in the north and breed. We won’t know those answers. Nor will we know whether those vagrants seen in previous years far outside of their range stayed around to breed, unnoticed by anyone who could identify them.

I do know that last Friday on that Main Street sidewalk, there were a dozen or so very intent birders, a number of curious motorists and passing joggers, and three Mississippi Kites. The birders were getting a rare treat, a vagrant seldom seen in New England, putting on an exceptionally rare show. The birders had smiles on their faces.
And the male kite, with his two females ... well, he seemed to have a smile on his face too. Good birding.

Email ThisBlogThis!Share to TwitterShare to FacebookShare to Pinterest
Posted by Chris Petrak at 7:00 AM
Labels: Mississippi Kite

What a wonderful article ---very informative, interesting and well-written! Thank you for sun-shining this cloudy Saturday morning! ===Jean Sterling, Maine!