I was scolded yesterday. I was scolded for trespassing. I was scolded up one side and down the other. She made herself abundantly clear that I had no business walking where I was walking. She went on and on and on, even after I took her point, meekly apologized, and departed.

It wasn’t as though I had ignored no trespassing signs and wandered across a field that was closed to intrusion. I had not crawled beneath a barbed wire strand, scrambled over a closed fence gate, or otherwise breached some closed barrier that said, “Stay out.” None of those things. 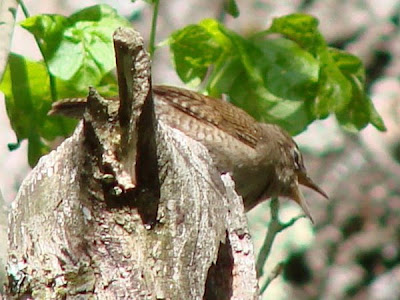 I had done nothing more than walk slowly from my back porch, down a few steps to my lower lawn in order to sit by the river. I was on my property the whole time. She didn’t care. As far as she was concerned, this was her homestead exclusively, and she made her opinion very clear and at length.

I tell you truly - I was intimidated, by a shrew that Shakespeare could never have tamed, by a bundle of nervous energy weighing less than one half of an ounce. I was intimidated by a mother House Wren. She determined that I would keep my distance from the young in her nest hole. She was unhappy when I moved my old Adirondack chair forty feet from the bird house she had stuffed with sticks. She was upset when I sat quietly like a peeping tom, hoping for a glimpse of her going in and out of her nursery. Finally the scolding got the better of me and I slunk off as unobtrusively as I could.

My yard is not my yard this summer. It has been coopted by the House Wrens. At least two males sing, dawn to dusk, from opposite sides, even when they are also busy bringing food to nestlings. There’s a second nest somewhere, judging by the scoldings I get when I inspect the four o'clocks.

In spite of the scoldings, I am delighted. Two summers ago the resident male, in his zealous defense of territory, was careless crossing the road. I found him dead, the victim of a passing vehicle. His mate spent a silent mid-summer trying to hatch infertile eggs, then departed. Last summer, we had no House Wrens. For the first time in twenty-five years, the yard outside our bedroom window did not echo with the rapid, rolling rattles and trills of the House Wren. 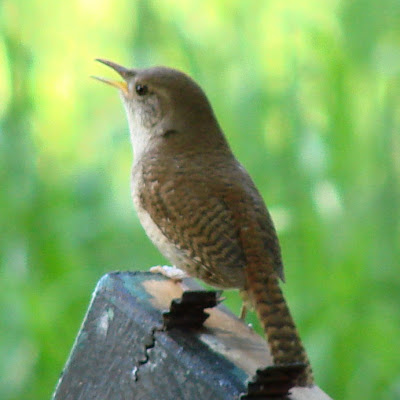 When John James Audubon was roaming the continent in the early 1800s documenting birds with his shotgun and paintbrush, he found the Wood Wren, a dark brown bird, in the southern forests. In northern states, he knew the House Wren intimately, a semi-domesticated bird common in gardens, orchards, farmland. It was even present in the very center of early nineteenth century cities, where people were putting up little boxes for them to use as nests. But at the end of the breeding season, the House Wrens disappeared, and Audubon had no idea where they went. What he never discovered is that his Wood Wren and the House Wren are the same species. At the end of summer, House Wrens migrate from the northern farms and cities to the southern forests.

The House Wren has lived for so long in proximity to human habitations that we regard our yards , gardens, and shrubs as its natural habitat. In fact, it is a forest bird - in open forest, woodland edges, beaver ponds, and brushy swamps, his complex song, with a volume out of proportion to his size, proclaims his territorial prerogatives while she takes any natural cavity as a nursery for their young.

But the House Wren has also adapted easily and readily to human presence. We know it as a common occupant of the nest boxes we put up. Audubon saw House Wrens occupying such artificial cavities; he also saw them “satisfied with any crevice or hole in the walls, the sill of a window, the eaves, the stable, the barn, or the upper side of a piece of timber, under the roof of a piazza ... the pocket of an old broken-down carriage ...” and the list goes on. He painted his House Wrens nesting in an old hat, the mother bringing a spider to the young anxiously hanging out of the side of the hat while the male is on the lookout nearby. 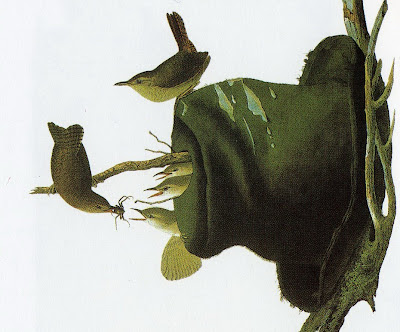 “In Pennsylvania a pair of these birds had formed a nest,” Audubon wrote in The Birds of America, “and the female was sitting in a hole of the wall, within a few inches of my (literally so-called) drawing-room. The male was continually singing within a few feet of my wife and myself, whilst I was engaged in portraying birds of other species.”

The House Wren is a product of the woodlands where it sought out hidden cavities and caves for its nest; its genus is Troglodytes - “cave dweller.” It still chooses cavities and caves when it nests in its natural setting, and when it chooses proximity to human habitations.

House Wrens are a successful species because they are adaptable, and able to accommodate to human presence. They also pose little threat to humans; they don’t scarf huge quantities of grain or raid chicken coops. They eat bugs, which can be a nuisance and destroy crops. They are amusing - bundles of energy, constantly coming and going, flitting their upcocked tails, chattering vibrant songs, saucily scolding the neighbor’s cat, the presumed landowner, or any other intruder.

I suspect that the harridan wren who so scolded me yesterday is a product of the natural woodland habitat, and that she was reared where there was little need for accommodation to human presence. She has barely accommodated my presence. 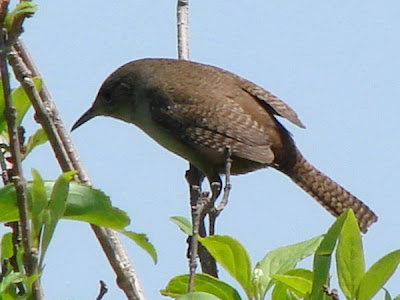 When I watch her more closely, I realize that she is not really scolding me. She is distracting me. I hear her chatter and I see that she has food in her beak. I take a step closer, and she flies, always further from her nest. She does not begin to approach the nest until I begin to move away from it. She is very wary about giving away its location, even though the box is hanging on a tree branch and is clearly visible.

Wrens may be vocally loud and conspicuous, but that is a technique for drawing attention away from the hidden nest. Her continual scolding at my presence, finally brought her mate into the picture. He sang, and when I approached him for a closer look, he moved off, and sang again. Clearly he was drawing me away from the hidden nest in the box hanging on the branch.

Both wrens had enough mental power to distract me and lead me off, but not enough to recognize that their nest really was vulnerable, save for my beneficence. But then, I can not fairly criticize wrens for a lack of mental reasoning ability - not when my own species so often lacks that ability.

Oh the noise of house wrens! While helping Eliot out in the garden, Julius occasionally gets so fed up with the never-ending harangue that he yells, "Shut up!" They don't listen to him.