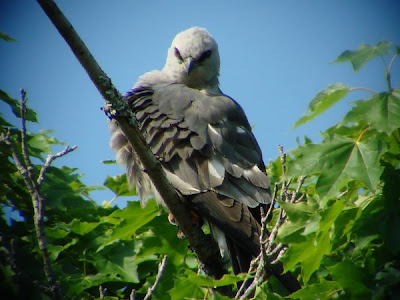 On July 21, I received an e-mail comment on my June 28 posting on the Mississippi Kite from Scott Williams in Mississippi. I asked his permission to post the comment and share it with others. Here it is:

My name is Scott Williams. We live in extreme Southern Mississippi, near the Alabama state line. Actually we live near the small town of Lucedale, Mississippi.

I read your blog about the three Mississippi Kites causing a stir in [New England]. We actually watch our Kites do this ménage a twau thing every other year or so.

We think that we have finally figured out what is going on. We have a tall sweet gum tree about 40 yards from our house. Every year the same two Kites return from Argentina to our sweet gum tree and raise a family in the same nest.

Year two, nothing happens. We think that the three of them may just stay in Argentina, or maybe they just don’t make it to our sweet gum tree.

Year three, three adults show up in a group. We think that it is the mother and father and the adolescent chick from two years earlier.

My wife claims that she can recognize the chicks from the previous brood. She says that they communicate with her. (coo coo, coo coo).

The mom and dad mate, lay an egg and incubate it until it hatches. We think that the adolescent from two years earlier helps with repairs to the nest and helps feed the new chick.

This goes on all summer. The “teenager” helps out, but mainly just to bring a dragonfly to its new sibling every now and then. It mostly just sits around in the top of a tall pine and talks to my wife.

All joking aside, we believe that this “helper bird” is a grown chick from an earlier brood that is still attached to mom and dad. After the chick is raised from the new mating we think that the teenager finally goes out into the world on its own.

Follow-up e-mail giving me permission to use his comments:

We love our Kites. If they are coming, they usually show up at our place around April 28th or 29th and nest in the same exact nest that they have used before. Sometimes they do repairs to, or reinforce, the existing nest.

You would think that with a name like “Mississippi” Kites that they would be abundant down here in Mississippi, but that is really not the case. Many of my friends have never even seen one.

They are especially fun to watch as the chick nears maturity. The chick begins his exploring by flapping his wings in and around the nest. Later the chick will fly to nearby tree tops. However when mom or pop comes dive-bombing in to feed him he will make a bee-line to the nest to get the food that they bring.

Thank you, Scott, for this interesting follow-up. The speculation was that the third bird in NH might be a helper bird. Great to have someone who has observed this behavior.

"Cooperative Breeding" birds was the subject of an article in March, 2008, by Bob Engel of Marlboro College in the newsletter of Southeastern Vermont Audubon - Go to www.sevtaudubon.org and click on Newsletter, then March, 2008. Link is on the right on this page.