Last week I had to cut short my account of the Ruby-throated Hummingbird in order to conduct field observations on this diminutive subject - observations requiring the kind of labor appropriate to a muggy summer day - propped feet on the back porch. 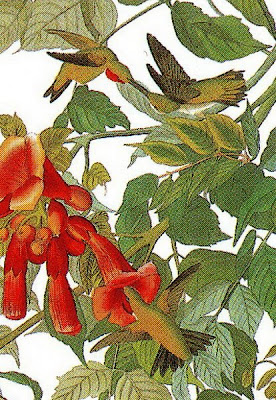 Between sips of an iced ade and naps, I also researched the observations of others on this tiny bird. John James Audubon wrote elegantly about the male Ruby-throated Hummingbird’s tender courtship of his love: “how full of ecstasy he seems to be when his caresses are kindly received; how his little wings fan her, as they fan the flowers ... how his attentions are received with apparent satisfactions; how, soon after, the blissful compact is sealed; how, then, the courage and care of the male are redoubled; how he even dares to give chase to the Tyrant Fly-catcher, hurries the Blue-bird and the Martin to their boxes; and how, on sounding pinions, he joyously returns to the side of his lovely mate. Reader, all these proofs of the sincerity, fidelity, and courage, with which the male assures his mate of the care he will take of her while sitting on her nest, may be seen, and have been seen, but cannot be portrayed or described.”

Audubon’s description is wonderful, but I suspect that while making his observations or penning these words, he was sipping a frontier neighbor’s fermented corn squeezings, because he simply got it all wrong.

As a mate, the male hummingbird lacks sincerity, tenderness, and fidelity. There is no blissful sealing of a compact. His courtship display consists of a large, U-shaped flight which may climb as much as fifty feet. Then comes the “blissful compact,” which might best be described as “wham, bam, thank you ma’am.” A friend once described it as fast and violent; he described it as rape, except that the female does seem consensual.

Once the brief act is over, the female Ruby-throat is on her own to build her nest, incubate her eggs, and raise her young, which have probably been fathered by multiple males. The male provides no tender care or protection. 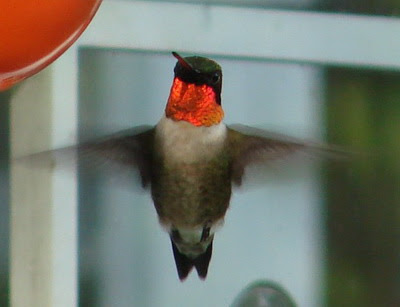 Meanwhile, the male continues to defend his territory. Forbush describes him as a gay wanderer with nothing to do but enjoy himself - a carefree bachelor we might say. But that hardly does his hormones justice. His sole purpose is to mate with as many females as possible, and to keep rival males at bay; he pursues his purpose throughout the summer. He is so driven that he neglects his own well being; territorial defense and copulation take precedence over everything. They also take a toll. Males may lose twenty percent of their body weight during the breeding season. They become ragged and weak. When breeding activity declines, then they feed again and rebuild their weight and muscle mass for migration. “This lifestyle comes with a cost: Female ruby-throated Hummingbirds live approximately 25 percent longer than males.”

Meanwhile, the female is doing the hard work ... and the dangerous work. The male can move quickly from his throne perch on a branch should danger approach. But a nest with eggs and young is stationary. “Ruby-throated Hummingbird females have been observed confronting and harassing tree-climbing snakes, hawks, crows, Blue Jays, Carolina Wrens, and Tufted Titmice.” They will often buzz humans and pets who get too close to their nest.

Early observers often commented on the Ruby-throat’s truculence and pugnacity; it seemed willing to attack any other bird, regardless of size, that somehow piqued its displeasure. Forbush shared the opinion of many that this “little bird seems to have few effective enemies. He is too agile and swift for them.” 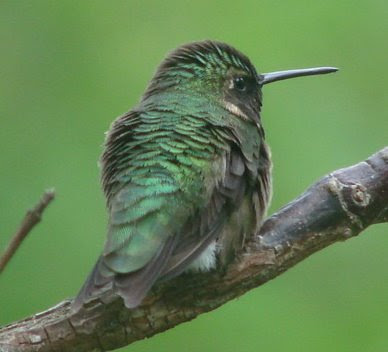 But this tiny bird does have enemies and faces many dangers. Arthur Bent in his “Life History” collected a wide range of perils faced by the Ruby-throated Hummingbird. A couple of correspondents told Bent of finding a hummingbird caught in a spider web. One hummingbird was being wrapped tightly by the spider, held fast and able only to plea for help; its rescuer delicately unwound the mesh and freed the bird.

Bent also reports a hummingbird whose stomach feathers became stuck to the pointed stamens of a thistle flower. When finally removed, it had lost a few feathers but otherwise was unharmed and flew off. Less fortunate was the hummingbird in this report: “We were seated by the lotus-pool when a hummingbird flew and hovered over the pool. Suddenly a bass jumped from the water and swallowed the hummingbird.”

In the mid-1930s a Merlin was shot near the Louisiana coast; the contents of its stomach were analyzed and included the remains of a Ruby-throated Hummingbird, the only record, at the time, of a hummingbird having been found in any bird’s stomach.

Bent also records several instances of frogs capturing and swallowing Ruby-throats, and an instance of a huge dragonfly on the back of a Ruby-throat; it had seized the bird by the throat. It is a dangerous world out there.

Our Ruby-throated Hummingbird is a drab little bird. Both sexes, and juveniles, are dull green above - camouflage from predators looking down at green leaves and plants. The dirty white of their underside helps them disappear against the sky when a predator is looking up.

Most of the time the male has a black throat, except when he is facing the observer. Then his throat flashes a bright, iridescent, ruby-red. This iridescence, a characteristic of hummingbirds, is produced by complex structures in the feathers. Microscopic discs and air bubbles cause light of the correct wavelength to be added together, while other wavelengths are canceled out, producing, in the case of the Ruby-throated Hummingbird, his ruby-throat.

The science of the hummingbird’s iridescence is explained, in part, by the physics of light waves. But physics does not explain purpose. When the iridescent, ruby-red throat flashes before the observer, it does something. It excites bird watchers. And more importantly, during certain times of the year it drives the lady hummingbirds ga-ga.

Email ThisBlogThis!Share to TwitterShare to FacebookShare to Pinterest
Posted by Chris Petrak at 6:00 AM
Labels: Ruby-throated Hummingbird

I believe I have read about some cases of bullfrogs eating hummingbirds, though I don't remember the source. It's a dangerous life.