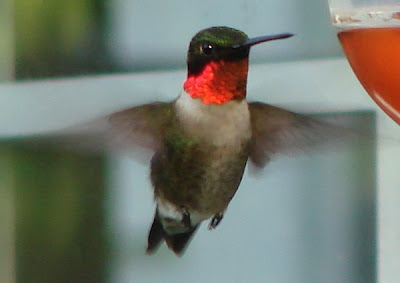 Walking through my garden, I felt something buzz past my head. It might have been a dragonfly, except dragonflies don’t land on branches and scold my intrusion into their realm.

For much of the day I had watched the “big bug” defend his territory - mostly the bright red blossoms of bee-balm, or anything else that he felt was his. The Song Sparrow had gone into hiding; the chipmunk ventured out rarely. The finches went elsewhere. Most of his aggression was directed toward his own kind - probably his own offspring. Young whirled about the blossoms, until from his perch overhead, he swept down, his flight forming a deep “U”, swinging from side to side like a pendulum - then darting out and chasing off all intruders - save perhaps for a female who might be receptive to another brood and thus to his amorous advances.

Gram for gram (ounces are simply too weighty for this little bird) the Ruby-throated Hummingbird is the most energetic and pugnacious of our eastern birds. I have written on other occasions of the tyrannical nature of the Eastern Kingbird, but for truculence and pugnacity, the kingbird is a distant contender to the Ruby-throat. 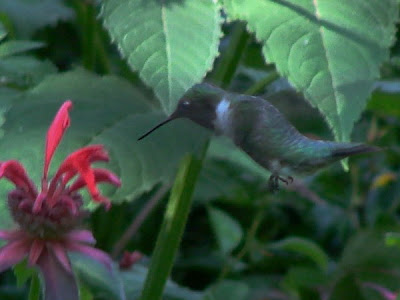 Forbush wrote of the hummingbird that he is “a mighty warrior, with greater strength and speed in proportion to its size than any other bird that flies. The flight muscles are relatively immense, and it is possessed of such spirit that it does not hesitate to attack any bird, no matter what its size, when occasion seems to require it. Kingbird, hawk, crow or eagle, all alike quickly feel the effects of the Ruby-throated Hummingbird’s displeasure. It has even been know to drive to cover a pompous Plymouth Rock rooster.”

“This little bird seems to have few effective enemies. He is too agile and swift for them. At times when he is not feeling truculent, he may allow some of the larger birds to chase him away from their nests, but I have seldom heard of the catching of a hummingbird by another bird.” (Forbush)

The first European settlers in North America had never seen a hummingbird and included the tiny bird among the marvels of the country. In 1634, William Wood described it thus: “The Humbird is one of the wonders of the Countrey, being no bigger than a Hornet, yet hath all the demensions of a Bird, as bill, and wings, with quills, spider-like legges, small clawes: For colour she is as glorious as the Raine-bow; as she flies, she makes a little humming noise like a Humble-bee: wherefore shee is called the Humbird.”

The rapid wing beats (up to 80 wingbeats per second!) create a “hum” - hence the family name, “hummingbird.” In flight, hummingbirds can hover and fly backwards. In forward flight, they can reach speeds of up to 60 miles per hour.

They are best known for their fondness for nectar. They have long slender tongues which can reach far beyond the tip of their long bills. The combination of bill and tongue allows them to reach deep into blossoms for the energy rich nectar.

It was long thought that hummingbirds relied exclusively on nectar for their food. It is now recognized that invertebrates are important and essential to their diet. They will eat anything small enough to swallow including fruit flies, gnats, mosquitos, thrips, aphids, spiders, maggots, caterpillars, ants, and insect eggs. “Quickly flitting from flower to flower, they ingest both the fuel (nectar) required for such activity and the insects and spiders that help them meet protein, vitamin, and mineral requirements.” (Sibley)

The Ruby-throated Hummingbird gets its name from the brilliant ruby throat of the male. The female is better camouflaged with her green back and white throat and belly. As with many species displaying sexual dimorphism, the plainer female hummingbird does the nest building, incubation and feeding of the young. “After mating, the male apparently becomes a gay wanderer with nothing to do but to enjoy himself or to chase other birds. He spends much time sitting on a particular twig, which he chooses for his watch-tower and resting-place, and dressing his plumage ....” (Forbush) 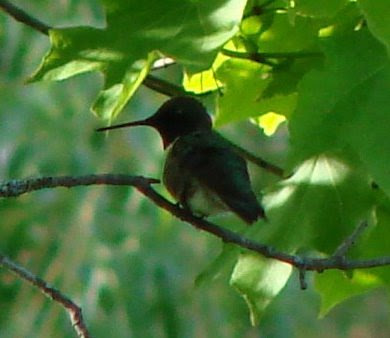 Over two months ago, the male Ruby-throat resident in my yard claimed a twig on the end of a maple branch. From there he swoops to the feeder, patrols the bee-balm, lilies, and daisies, and maintains a truculent control of the neighborhood. The numbers of plain-colored hummingbirds that have begun to appear are probably his off-spring, though he shows little parental interest. Rather, it seems that he is more likely to display resentment that he must share his territory.

I sometimes worry that my hummingbird feeder is a fast-food junk-food for hummingbirds. (A reader told me about numbers of hummingbirds emptying her feeder in a day.) But as I watch the activity in my yard, the hummingbirds are not relying exclusively on the “junk-food.” Their visits to the feeder are only occasional. In fact, I see them on the bee-balm much more often than at the feeder. Even the young ones seem to know that they need more than just a sugar rush. 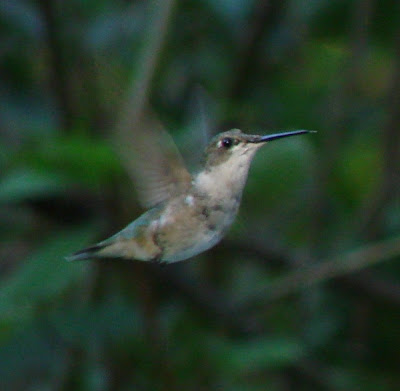 Hummingbirds feeding at flowers are acquiring fuel (nectar) and protein, vitamins and minerals, the latter in the form of insects and spiders. One common method by which hummingbirds hunt insects is by “hawking.” They perch on a bare open branch, watching for insects. Flycatcher like, they attack the passing insects. Ruby-throated Hummingbirds have been observed taking as many as thirty insects from a swarm in one hovering attack. Hummingbirds also feed by “gleaning,” searching new leaves for tiny caterpillars, turning over leaves the way some warblers do, or poaching food from other foragers. They will sometimes steal insects trapped in a spider’s web, as well as eating the spider, its eggs, and its young.

I would like to tell you more about female hummingbird breeding behavior, nest predators and other dangers to hummingbirds (such as spider webs during migration), or feather iridescence. But right now, I have field work on the Ruby-throated Hummingbird which demands my attention. I must sit quietly on my porch, with feet propped and an iced ade nearby and study my backyard hummer. It is a demanding way to spend a somnolent summer afternoon, but such efforts are necessary in the pursuit of Good Birding!

Quotations are from Forbush & May, “A Natural History of American Birds,” 1955, and David Sibley, “The Sibley Guide to Bird Behavior,” 2001.

Email ThisBlogThis!Share to TwitterShare to FacebookShare to Pinterest
Posted by Chris Petrak at 7:00 AM
Labels: Ruby-throated Hummingbird