I love the seashore and beach most of the year. I am not too keen about the seashore during the summer when the sun is melanoma producing, and the sand is littered with debris that has drifted from inland and is scattered in nearly naked lumps all over the place. But in the fall, winter, and spring that debris has been gathered up and returned to its city scape. Then the seashore beach is in its elemental form. The rising and falling tides stir the sands, smoothing them at the water’s edge, constantly reshaping the sandbars and dunes, and often casting up the ocean’s debris. 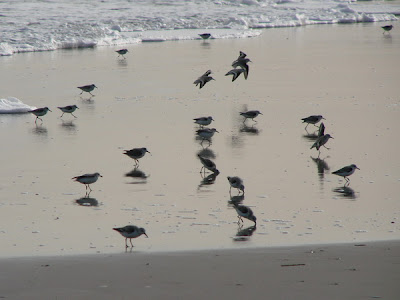 In late October, I walked some beaches in Cape May, New Jersey. The low sun of the waning day glared off the placid waves. My long shadow preceded me as I walked slowly along the wet sand, just out of the water’s reach. Another lone walker was far ahead, apparently more intent on exercise than I was; her pace widened the distance between us. I allowed the distance to grow greater as I stopped and watched tiny white shorebirds chasing the waves.

Their legs were a blur as they ran up the sand ahead of the waves. Then they reversed direction to chase the water as it receded - back and forth, like school yard children playing tag - or teasing a playful dog on a leash. The birds I watched were Sanderlings, and they are one of the reasons I love the beach along the seashore.

Sanderlings are common along our seacoasts except from mid-June to mid-July. During that period they are north of the Arctic circle, breeding. They waste little time in that task and are soon back along our coasts, chasing the waves. If you see a sandpiper on a sandy beach going back and forth with the water, barely getting its feet wet, you are seeing a Sanderling.

Audubon knew this bird as the Sanderling Sandpiper. Somewhere along the line, the mavens of nomenclature decided this was redundant, and dropped “sandpiper” from its name. But the Sanderling is arguably the only “true” sandpiper. 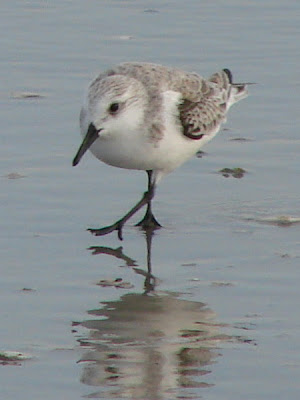 The “piper” part of “sandpiper” seems to come from a word meaning “chirp,” or “peep,” hence sandpipers are “birds that chirp on the sand,” or “peep on the sand.” The Sanderling and its closest relatives (in the genus Calidris) are known among bird watchers as “peeps.”

The Sanderling (meaning “little bird of the sand”) is the only sandpiper which you will regularly find on sand - or sandy beaches. I went through the Kaufman guide for the habitats where we are most likely to see other Calidris sandpipers. Here’s what I found:

Most of these sandpipers will rest and sleep on sandy flats. On northbound migration, they feed on horseshoe crab eggs buried in the sandy beaches of the Delaware Bay. But their usual, preferred place for foraging, and where they are most often seen by the watchers of shorebirds, is not the sandy beach. Most would be more accurately termed “mudpipers.” But don’t expect any name changes in the near, or even distant, future. There is no requirement for accuracy in a common bird name. 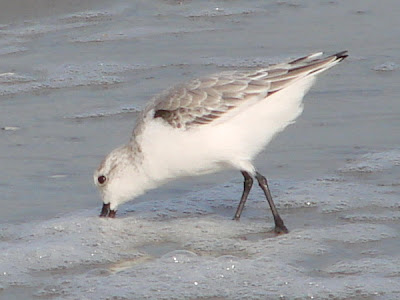 The Sanderling is common, and it is very tempting to see it along a sandy beach - say to oneself, “Sanderling,” and go on to look for something else. But they merit leisurely watching. I stood watching them as the waves broke, spray flying. They were masters of timing - probing the sand, then nimbly running up the slope ahead of the water - then racing the water back down to grab new morsels stirred by the water’s action.

I watched a dozen Sanderlings probing wet sand where the tide had ebbed. Something sent them flying further down the beach. I walked closer to where they had been probing. Tiny little holes dotted the wet sand, an inch apart in random lines. My feet barely left a mark on the hard, wet surface. The tiny feet of the Sanderlings left no mark at all. Had I not been watching, this series of holes in the sand would have posed a mystery, causing me to wonder what could have caused these neat, uniform holes in the sand. But I had seen the Sanderlings. 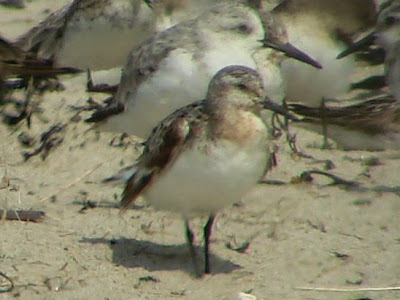 Most of the year when we encounter Sanderlings, we see them in winter plumage. Then they are white, or gray-white, pale and chunky little birds. In Spring they molts into breeding plumage, briefly sporting a rich, reddish brown on head and foreparts. The times of transition from one plumage to the next present an array of in-between appearances. But whatever the plumage, Sanderlings are most likely to be on the sandy beach chasing the receding waters and speeding from the incoming waves.

On that Cape May beach, the Sanderlings were frenetic in their feeding, but fairly calm with my presence. By slow degrees, I inched closer. I could see them probe with open beak, gulp some tiny delicacy, always mindful of where the water’s edge was, whether to hurry toward the ocean or away from it.

And then suddenly, the flock took flight. In an instant, sixty birds disappeared over the dunes. In the corner of my eye, I saw a dark form. Almost as quickly as I could lift my binoculars, the dark form had also disappeared beyond the dunes. I could only get a feel of pointed wings, but it was enough. Sanderlings were foraging along the shoreline in the late afternoon. So was the Merlin. I had watched Sanderlings ingesting energy against the chilly autumn night. And now I wondered if the Merlin, a falcon of the north, would also be feeding.

I can’t choose between the two, and have no right to do so anyway. So I wished the Sanderlings - and the Merlin - good luck and good feeding.

The seashore birding that late October afternoon was very good.

Email ThisBlogThis!Share to TwitterShare to FacebookShare to Pinterest
Posted by Chris Petrak at 6:00 AM
Labels: Sanderling

Interesting and informative blog. I particularly enjoyed the pics and infor about the Norther Cardinal. We have a few regulars of those here. Not many shorebirds though as our county has zero lakes.