Black Skimmer - an Oddity among the Aerial Waterbirds 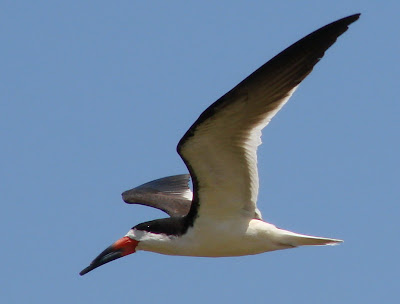 If you can get a close look at a Black Skimmer, you might think it has been mutated by some toxic soup. Its beak looks deformed. The lower mandible is noticeably longer than the upper mandible. Clearly the bird is incapable of picking up food. So how does it eat?

That was a question asked by one of the earliest European observers of the Black Skimmer. In the early 1600s, Samuel de Champlain voyaged to Cape Cod, briefly dropping anchor in what is now Nauset Harbor in Orleans. His “Voyages” describe one of the birds observed: 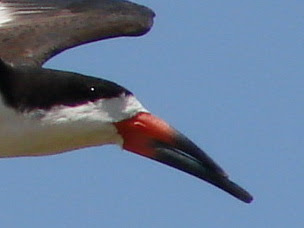 “We saw also a sea bird with a black beak four inches long and in the form of a lancet; namely, the lower part representing the handle and the upper the blade, which is thin, sharp on both sides, and shorter by a third than the other, which circumstance is a matter of astonishment to many persons, who cannot comprehend how it is possible for the bird to eat with such a beak. It is of the size of a pigeon, the wings being very long in proportion to the body, the tail short, as also the legs, which are red; the feet being small and flat. The plumage on the upper part is gray-brown, and on the under parts pure white. They go always in flocks along the seashore, like the pigeons with us.”

The gray-brown upper part described by Champlain suggests that the flock was dominated by juvenile birds who had perhaps wandered northward from breeding grounds along the mid-Atlantic coast. Old natives of Cape Cod knew the skimmers as “them cutwater or shearwater birds used to be with us summer times.”

By the mid-1800s, however, Audubon reported that the Black Skimmer was known in Massachusetts and Maine “only to such navigators as have observed it in the southern and tropical regions.” Along the southern coasts and Gulf of Mexico Audubon found winter roosts with thousands of Black Skimmers. 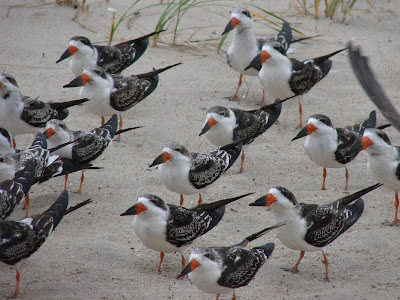 On a foul day in late October, I drove Beach Drive in Cape May, New Jersey. The promenade/seawall hid the beach, but I briefly glimpsed long-winged birds circling low against the gray sky as they descended to the sand. I parked, climbed to the promenade and descended to the beach. On the open sand, about seventy-five Black Skimmers were roosting in a tight group, all facing into the bitter ocean gale. Wind-blown sleet needled into my back as I inched closer to the roost. A couple of Laughing Gulls were nervous at my presence, but the skimmers seemed remarkably passive.

Older naturalists always included the “economic benefit” of the species they described. Forbush writing in the 1920s, for example, notes that the skimmer’s plumage was of no value to the millinery market and that its flesh was not valued as food. However, “its eggs were prized on account of their large size. As Skimmers deposit their eggs without concealment on the open sands, the same fate overtook them along the northern coast of the Middle States, where they have been extirpated within recent times.”

Thirty years ago when I began birding, I never saw Black Skimmers in southern New Jersey. I saw one at the Chincoteague NWR in Virginia, but it was years before I saw another. Protection programs have allowed the skimmers to reestablish breeding grounds along the New Jersey coast, and they are now quite common. That bitter day a month ago when I watched them huddle close, occasionally taking short flights, and coming back together, was a delight. Had the weather been more agreeable, I would have spent more time.

On a delightful, warm, sunny day last May, I spent an hour watching Black Skimmers as they went to and fro from their roost in a coastal impoundment to forage in a nearby estuary along the Delaware Bay. Skimmers feed by flying just above the surface of the water. Their long, lower mandible cuts the surface of the water. The beak is open. When the lower mandible touches a fish or crustacean, the prey gets swept up, the upper mandible snaps shut, and the bird eats. 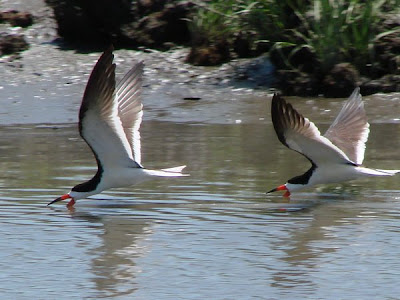 Apparently Champlain never saw the bird foraging, since he wondered how it could pick up food to eat. With an upper mandible much shorter than the lower, the skimmer can’t pick up food without exceptional contortions. But, it doesn’t need to pick up food , once it has learned how to skim the water’s surface, grabbing food.

Parent skimmers feed their young by regurgitating food. Young skimmers, like the young of many species, are often sloppy eaters. They can pick food from the ground, since the projecting lower mandible does not fully develop until they can fly.

There are only three species of skimmers in the world; the Black Skimmer is the sole representative in the western hemisphere. Skimmers often forage at night and have keen night vision. Audubon regarded them as almost exclusively night feeders: “They spend the whole night on wing, searching diligently for food. Of this I had ample and satisfactory proof when ascending the St. John river in East Florida, in the United States schooner Spark. The hoarse cries of the Skimmers never ceased more than an hour, so that I could easily know whether they were passing upwards or downward in the dark.”

Skimmers also forage at dawn and dusk when prey is closer to the surface, and during during the day when the tide is low. In the day time their large pupils, adapted for night vision, close to a narrow slit, much like a cat’s eyes, protecting the eye from bright sunlight and glare from the water. They are the only birds with such an eye adaptation. 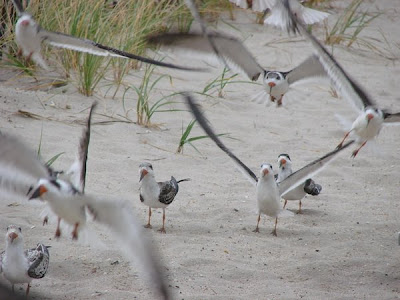 I finally inched too close to the Black Skimmers for their comfort and they swirled into the air, long wings lifting them easily and gracefully into the gale winds. Buoyant and strong, the flock twisted and turned and wheeled in unison around me, but soon settled again at a slightly more comfortable distance from where I stood.

Birding on that nasty October day was limited to my brief venture onto the beach to see the Black Skimmers. But that was enough to qualify for Good Birding.

Email ThisBlogThis!Share to TwitterShare to FacebookShare to Pinterest
Posted by Chris Petrak at 6:00 AM
Labels: Black Skimmer

Strange but beautiful bird. Thanks too for the neat pictures. I loved the history part too (naturally since that's my field)

Very touched by your account of encountering the birds on a cold day. Had similar experience and privlidge of finding a group of tiny hatchlings in winter on the north beach of Tybee island, Ga in 2001. We were moving to Ga from Chicago that winter and I loved sitting with them on cold mornings in the sand, watching their growth until spring. I didn't have any idea what they were until last year, and saw them skimming in evening at low tide. What a sight!
You have a great blog! Thank you for excellent writing and photography.