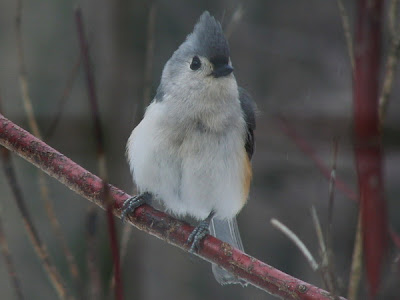 Just before the January thaw came along in late December, I was bringing in an armload of firewood. Through the crisp winter air I heard clear whistled notes: “peeer ... peeer ... peeer.” Though the wind was cold, I had to pause my usually brisk pace to be sure I had heard correctly: “peer ... peer ... peer.” A Tufted Titmouse was singing. Was he a weather prognosticator who knew a warm front was on the way? And did that prompt him to get a early start in attracting a mate? Or was he just singing because the sun had made a brief appearance? - a cause for celebration during a weather-bleak week.

Rather common, at least in the valleys, the Tufted Titmouse is a newcomer to Vermont - a flatlander from the south. Edward Forbush, the Massachusetts’ ornithologists, knew so little about this bird that he had to draw on the accounts of others for his description. The titmouse was a rarity in New England when he did his major work in the first half of the twentieth century. He listed its range as extending only to New Jersey and southern Pennsylvania.

The Tufted Titmouse is a cavity nester, often taking over the old hole of the Downy Woodpecker. Primarily a forest bird, once the breeding season is complete it becomes a foraging opportunist. Audubon wrote that “it approaches the plantations, and even resorts to the granaries for corn.” Today, it uses the opportunities provided by bird feeders. 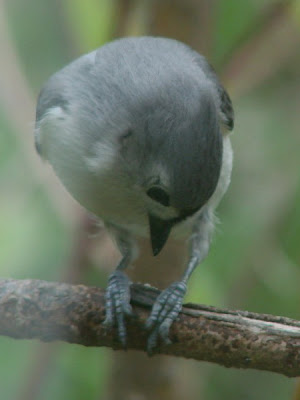 Audubon’s description of the titmouse’s feeding technique is worth quoting: “It moves along the branches, searches in the chinks, flies to the end of twigs and hangs to them by its feet, whilst the bill is engaged in detaching a beech or hazel nut, an acorn or a chinquapin, upon all of which it feeds, removing them to a large branch, where, having secured them in a crevice, it holds them with both feet, and breaks the shell by repeated blows of its bills. They are to be seen thus employed for many minutes at a time.”

I watch the titmouse do almost exactly what Audubon described, except that the “nut” which it carries to a tree to pound open with its beak is a sunflower seed. During its passage through the backyard, it goes back and forth from the feeder to a tree branch where it pries out the nutritious meat.

The strange name, “titmouse,” seems to derive from two Middle English words both of which have antecedents in earlier Germanic languages. “Tit” is a general term for anything small, while “mouse” derives from “mose” and means something like, “small bird.” So “titmouse” means (redundantly) a “small small-bird.” A few fussy language pedants insist that the plural of “titmouse” should be “titmouses,” but they are fighting a lost battle. “Titmice” is the accepted plural. Oh well, says one source, the bird has a mouse-like movement, so we should probably go along with more that one being “mice.” 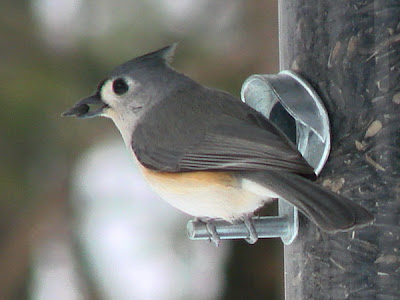 Sometimes when I consult Audubon’s “Birds of America,” I have difficulty finding the bird I want to read about because his names are often different than the current common names. I did not have trouble figuring out that our Tufted Titmouse is Audubon’s Crested Titmouse. But his account of the Crested Titmouse was then followed by accounts of the Black-cap Titmouse, Carolina Titmouse, Hudson’s Bay Titmouse, and several more titmice (titmouses!).

The latter accounts all described chickadees, respectively the Black-capped, Carolina, and Boreal Chickadees. Audubon was using the English term applied to members of the genus, Parus, which in his time included many closely related and similar appearing species, all of which bore the name “titmouse.” The North American titmice and chickadees, and the European titmice, still belong to the same family, Paridae, but DNA studies have resulted in separating them into six distinct genera. In North America, there are two genera, one for chickadees and one for titmice. All have strong legs and short, stout bills. The chickadees all have a dark cap and bib; the titmice all have a short crest.

Perhaps you are now feeling that this is more name and classification information than you really need. That the Tufted Titmouse and Black-capped Chickadee are closely related can be seen by watching their similar behavior, as for example, the manner in which both open up sunflower seeds. Both are responsive, curious, and often very tame. They may travel together in the same foraging groups along with nuthatches and woodpeckers.

The chickadee is easily recognized by its most familiar call, the name-saying “chick-a-dee-dee-dee,” but it also has a variety of other calls which it uses to communicate with other chickadees. However, sometimes the chickadees that are calling are not chickadees. Sometimes the call (to use Sibley’s description) is a series of angry, nasal, rising notes: “sii, sii, zhree, zhree, zhree.” Or they are whining scolds: “sesee-jjeeer” (Kaufman). Then we are hearing the Tufted Titmouse. 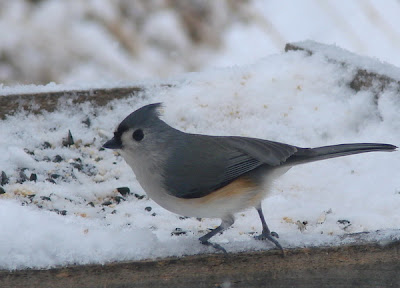 The Tufted Titmouse, like so many of our winter birds, is rather drab - gray above, white below, with rusty orange along its flank. What it lacks in showiness, it makes up for in attitude - or at least in the attitude it evokes within me. I am cheered, and amused, and entertained whenever the titmouse comes to the feeder.

Email ThisBlogThis!Share to TwitterShare to FacebookShare to Pinterest
Posted by Chris Petrak at 6:00 AM
Labels: Peter-bird, Tufted Titmouse

I have a lot of titmice here in Massachusetts. They are fiesty little birds and I love to hear them hollaring at one another.

Very ineresting into in titmice and chickadees. I didn't know that so it was very informative.

When I was five years old, I visited Grama’s house in the sticks in Connecticut. And surely, there was someone calling my name! So I walked out into the unknown, entering a forest of plants towering above me like giant redwoods (the neighbours’ corn patch) and was probably followed home. We have the blue-capped and black-capped chickadees, but no "Peter-birds" in Norway. No wonder I was fooled!
Peter U., Oslo, Norway

Edit: It should proably be titmice. Kjøttmeis for the black-capped (Parus major) and blåmeis for the smaller, blue-capped (Cyanistes caeruleus, prev. Parus caeruleus). Both feisty birds. Great fun to watch in the winter when they forage with each other and other similar birds for seeds etc.
:)