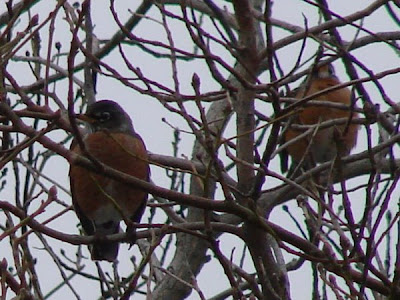 It was a clear, crisp, December day in 2004. The mid-afternoon sun gave a warm golden glow to the southern flank of Black Mountain along Rice Farm Road. We were winding down our long day on the Christmas Bird Count. We stopped to do a quick check of the scrubby fields, but did not really expect to find very much. We couldn’t have been more wrong.

In the shrubby berry bushes, we first heard Cedar Waxwings, then saw them moving rapidly, voraciously feeding on the fruit. Accompanying the thin buzzing of the waxwings was another very familiar sound - the rattling call of robins. We began to count them; after a few minutes we stopped counting and settled for an estimate which was more quesstimate - perhaps two hundred fifty robins were working between the woods, shrubs and fields.

Once robins have completed their breeding season - which may involve raising three broods - they begin to collect in flocks, often of hundreds, or even thousands of birds. As the season progresses, their diet also shifts from animal protein during spring and summer (earthworms, grubs, insects and the like) to vegetable matter, principally fruit in the fall and winter.

These large flocks wander, roam, and migrate. My late October trip to Cape May coincided with the passage of robins through southern New Jersey. Huge numbers of robins fell out of the morning sky after their night flight, feeding on the junipers, winterberry, bittersweet, sumac, and other berries. (Not coincidentally, the robins’ descent into the trees and shrubs was followed by Sharp-shinned and Cooper’s Hawks.)

The American Robin is one of the most widespread, familiar, adaptable, and successful species in North America. Except for southern Florida, extreme southern Texas, and the southern Arizona and California deserts, it breeds throughout the continent, north to the Arctic tree line. As winter approaches, it abandons its northern range and heads south. Most range maps show it absent from the northern Rockies, northern Great Plains and most of New England in the winter. But not necessarily ... when I went north to Montreal a few winters ago in pursuit of the Great Gray Owl, I also saw many wintering robins. 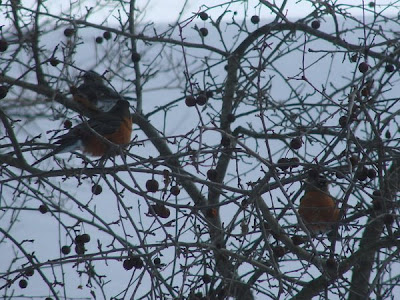 Unfortunately, that wonderful old piece of folklore about “Spring is on its way, I just saw the first robin” is not true. Robins can be found just about anywhere in the lower forty-eight during the winter. While typically wintering in large flocks, those flocks can be very nomadic; if their nomadic ways don’t intersect with our ways, then we conclude that they are not present - gone south.

The robins that nest in our neighborhood have probably gone south, while the hardier birds which breed far to the north, have moved down to replace them. But, through the whole continent, there is little variation in the American Robin (Turdus migratorius), an indication that breeding populations are constantly being mixed. Only in Sibley’s Guide are regional variations noted, and those variations are very minor - western robins have limited white tail corners - Atlantic Canada robins have a blacker nape and upper back.

The species name, “migratorius,” does suggest that a characteristic of the robin is its migration, but that migration pales when compared with the epic journeys of many other (perhaps most other) song birds.

The American Robin belongs to the thrush family, subfamily Turdinae, and the Genus Turdus. It is the only member of its Genus which any of us are likely to see. Rufous-backed Robin and Clay-colored Robin are accidental at a few places near the southern border, and the Fieldfare from Europe turns up in the East only on very rare occasions. The full common name of Turdus migratorius” is “American Robin,” but it is so common that almost everyone knows what you are talking about when you talk about “robins.”

Nevertheless, we should never underestimate the ability of grammar to create confusion. When looking for information, I googled “winter robin” and found many articles referring to, or even titled, “Winter Robin.” “Winter Robin” sounds like the common name of a bird species, and I have had a couple of occasions when I have had to explain otherwise. “Winter robin” refers to an American Robin that is wintering in a wintery area - staying the winter, or being seen during the winter. It might better be referred to as a “wintering” robin. Not all robins abandon our north country and head south. Not all robins pass through our north country for more temperate winter climes. Some robins, probably from father north, stop here, and may even stay here for the winter. They are wintering.

You should not be surprised to see robins throughout the winter. They are warm-blooded. They have remarkable insulation from their down feathers. They can maintain body heat through a cold night by shivering. They can survive as long as they can get enough food during the day to replenish their stored fat reserves.

There are factors which will affect whether you see robins during the winter or not. The biggest correlation seems to be snow cover. Data from the Great Backyard Bird Count done annually in mid-February indicates that the probability of seeing robins drops “dramatically in areas with even just a few centimeters of snow cover.” Unusually low snow cover often results in unusually high numbers of robins, a pattern which has been seen over several years of accumulated data. It seems that robins, which are primarily ground feeders, avoid snow-covered areas ... usually. But not always. I had a bumper crop of apples this past summer. 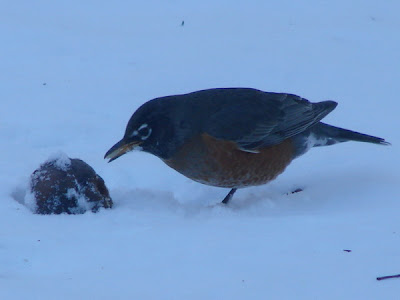 Much of the fruit is still on the trees, but a few apples drop every day. During the week after Christmas, with snow cover in excess of twelve inches, I had robins feeding on the apples in the tree and on the ground. I watched a pair excavate a large hole in one fallen apple, happily scarfing down the fruit. The fruit was mildly fermented (in all probability), so they were getting a buzz along with their meal.

Robins are self-sufficient and quite capable of finding their own food sources. If they appear around backyard feeders, it is because there is some other food source. They do not eat bird seed; their stomach and intestines are not designed to digest such food. Some people have enticed robins to bird feeders by putting out cut up fruits (apples, pears, cranberries, blueberries), softened dog food, or a variety of worms. The problem is that most robins have never heard of such a thing as a bird feeder. It just doesn’t occur to them to seek human handouts. It has been suggested that putting out “robin food” during severe weather might be helpful, but it is more likely that the squirrels will find the food before the robins do.

Do not be surprised if you see robins during the winter. They are American Robins which are wintering - hence “wintering” robins. Their rattling call can brighten the dreariest of winter days, and should any of those winter days turn pleasant and mild, they are likely to burst into cheerful caroling.

Email ThisBlogThis!Share to TwitterShare to FacebookShare to Pinterest
Posted by Chris Petrak at 6:00 AM
Labels: American Robin, wintering robins

Excellent and informative post. I learned a lot about robins that I didn't know. I put out some soaked raisins and sliced apples for the robins and they did not find it. I just feel so bad for them when they are trying to find remaining fruit on my berry tree because it is almost completely gone. That is why I will be planting more berry producing trees and shrubs this spring.

I was shocked to see a Robin yesterday in my yard
( Massachusetts ).
I have never seen a Robin at this time of year!
We have about 10 inches of snow with an ice pack below that.
Today the Robin was back in the same spot and then later there were two!
I was wondering what caused them to be here....the ground is covered and it is cold with minus zero temps on the way.
I learned a lot today by reading your post!
THANK YOU!

I am also in the southerly eastern Vermont area and have been hearing and seeing flocks of robins throughout the neighborhood for the past week or two. Having a robin gaze at me from a snowy pine branch in January is not exactly what I've come to expect from a harbinger of spring.
Your article was an eye opener--like learning something new about one's own backyard.

Thanks for your comments - guess I'm one of the true migrants - I'm in Arizona. Saw a robin yesterday.

Today, January 26, I heard a familiar noise outside that shocked me. I went out to find a whole flock of Robins eating berries off my flowering locust trees (I have two of these trees.)

It surprised me so that I took photos in case someone disbelieved me. I live in southern Vermont. We have about a foot or so of snow at this time. The temp has rarely gone above twenty degrees, and has been below zero (as low as minus twenty one degrees) so you can imagine my surprise.

Your artical made me feel a little better, about them being self sufficient, and they are VERY plump, spending most of the day in those trees. This is the first I have ever seen Robins this time of year. Even in the warmer winters, i've not seen them.

Tomorrow I will put out some apples (I can just shove them onto the huge thorns of the locust tree. And of course, there are plenty of berries, a little dehydrated, but there none the less.

Thank you for all the information. I will not worry so much now.

with an inch of snow on the ground today(2/5)in Brooklyn I observed a flock of about 25 robins in my hemlock. They were not singing just warming in the 12 degree sun.
I threw them some overripe grapes which they ignored. I know many winter over in the Northeast but this was a first for me.