When Good Birding is Not Important

BISBEE, ARIZONA: Last weekend we attended “Wings Over Willcox,” a small, delightful birding festival which focuses on the concentration of wintering birds in the Sulphur Springs Valley north and south of Willcox. Raptors flock to the valley. In places it seemed that a Red-tailed Hawk was perched on every fourth utility pole, with kestrels occupying the lines between the poles. The uncommon Ferruginous Hawk, the largest buteo, was seen overhead, perched on the ground, and on a utility pole. An owl roost included Great-horned, Long-eared, and Barn Owls.

Scattered through the arid grasslands of the valley are small wetlands filled with ducks, geese (including some Snow Geese), grebes, several herons, and a few shorebirds, all attractive to a birder in search of good birding. 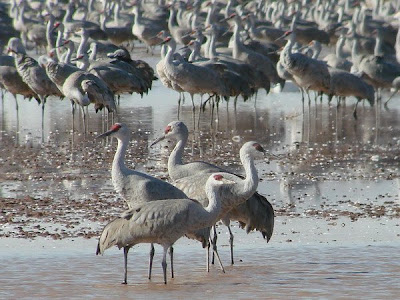 But the iconic wintering bird, drawn by wetlands and fallow agricultural fields to be gleaned for grain, are the thousands of Sandhill Cranes which winter in the valley. They lift from their night roosts at dawn, filling the airwaves with their rolling bugles, and smudging the clear desert sky with their dark masses. People with only the most casual interest in birds gape as long, noisy v-formations pass overhead, as they rise from, or come down to, a roost with a cacophony of beating and braking wings.

Winter birding in Southeast Arizona is pale compared to spring migration and summer nesting, but remarkable nonetheless, with permanent residents, northern migrants, and Mexican vagrants providing innumerable opportunities. In Southeast Vermont, you might struggle to see thirty species on a January day; three times that number is quite reasonable in the basin and range of the desert southwest.

However, when we did our planning for this January trip to Arizona, our priority was not birding. Our priority was to be in a place on January 20 where we could watch the Presidential Inauguration.

On one of the birding festival bus trips, my spouse heard the driver say something like: there are too many Africans. I don’t want to parse the comment, but it did make me reflect on why a white male of northern European ancestry should feel such a sense of accomplishment in the inauguration of President Obama.

I grew up in the 1950s. My parents worked to build their American dream, aware of events but not strongly engaged in those events. Schools struggled to cope with the post-war baby boom; education was still slowly evolving from the simpler past. Political correctness and inclusiveness lay in the future. As I recall, history was a telling of the conventional truth, straightforward, simple, and perhaps even simplistic. But something in the atmosphere of the post-war decades infused my generation with an idealism - an idealism that accepted Jefferson’s Preamble to the Declaration of Independence and the Bill of Rights as the way the world is meant to be.

Then other things began make their impact on me. I remember in the late 1950s traveling with my grandfather. I remember the first time in Virginia when we needed the men’s room; we went through the door marked “Whites;” another door was marked, “Colored.” Later we used the water fountain marked “Whites.”

The minister of the large church in which I grew up in Detroit was one of the great pulpiteers of his generation. To this day, I can remember a few snippets of his sermons. But I also remember that when blacks were being turned away from churches in the south on Sunday mornings that his pulpit made no comment or reference.

So many citizens have not been given the full benefits of our country, for the most superficial of reasons. I have to feel good that they feel so good about the realization of hopes and dreams.

In addition to what I view as a welcome political change, this Tuesday, January 20, is also a confirmation of youthful idealism - that there is reality in those hopeful documents from the earliest years of our history. I’ve been around long enough to have worn out the rosy lens and to grasp hard realities. For a few moments, I have returned youthful idealism. How great that is!

I enjoy a day of good birding. But even the best day of birding is trumped by a day of history and an affirmation of one’s ideals with their promise and their hope.

Email ThisBlogThis!Share to TwitterShare to FacebookShare to Pinterest
Posted by Chris Petrak at 6:00 AM
Labels: Obama inauguration, Sandhill Crane

I live in Hinesburg,vt and have been seeing so many pine siskins at my feeders. Unbelieveable numbers, and have never seen them before. They have taken over and the chickadees are being pushed aside by them!!! cyndi