CAVE CREEK CANYON, ARIZONA: Today we saw two sought-after Arizona birds: the Elegant Trogon and the Montezuma Quail. When I reported to our ranch host that we had seen the Elegant Trogon in the same area where it had last been reported over a week before, he responded: “That’s very good sighting.” I then told him that today we had also seen the Montezuma Quail. “Fantastic,” he replied.

“It was our second sighting,” I added. “The the cock stood straight up and posed for us.”

The birding gods had smiled on us again. Those fickle spirits arbitrarily bestow good fortune and good luck to some and withhold it from others. Finding rare or unusual birds often requires persistence and patience. Alertness and skill are contributing factors to success. But none of these guarantee success. Randomly the birding gods spin the wheel of good fortune; often the undeserving is rewarded while the just goes away empty-handed. 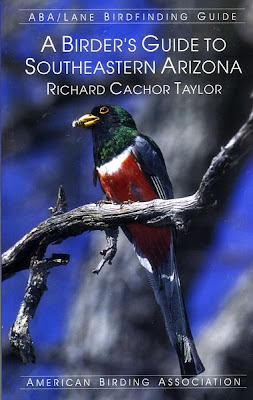 The Elegant Trogon is a tropical species whose breeding range just barely reaches into southeastern Arizona. Slightly larger than our Blue Jay, it is a resplendent bird. Pete Dunne nails the description with these words: “The adult male looks like a bird painted by a color-struck four-year-old. The head, breast, and back are iridescent green. The face is black, the wings bluish, the belly red, and the tail oxidized copper (greenish and rufous) above, broadly banded gray-and-white below. The red ring encircling the eye ... hardly warrants mention.”

During breed season, the Elegant Trogon blends into the riparian woodlands in mountainous canyons. Vocally the males defend their territory and patrol their domain, giving birders a clue to their presence. When the breeding season is over, most Elegant Trogons withdraw southward, but according to the ABA guide, an estimated one to five trogons overwinter in southeastern Arizona.

Four years ago, we searched a riparian area where a trogon was wintering, without success. The same area hosted a wintering trogon this year, and we searched the area with the same negative results. In Madera Canyon in the Santa Rita Mountains, an Elegant Trogon was wintering along the creek behind our lodge. I asked the birding gods to spin the wheel in my favor, and wandered up and down the stream looking for it. The birding gods did not smile.

In Cave Creek Canyon in the Chiricahua Mountains, a wintering Elegant Trogon was being seen between two small forest service campgrounds. You might think that a rather large, flashy bird with a bright red belly would be easy to see. But during the winter, the Elegant Trogon is silent; it spends most of its time perched close to a trunk. Though the area where it was located was very limited, the forest was dense with evergreen oak.

This was our last day in Cave Creek Canyon. We made a final obligatory stroll between the two campgrounds. Near the end of the stroll, we glimpsed a jay pull up and land, nearly concealed in the shadow of a trunk. But the jay did not seem quite right. The Mexican Jays of these mountains are like our eastern Blue Jays; they never go anywhere without making noise, and this bird was silent. So we raised our binoculars. In the shadows, the jay’s head was oddly shaped. When that head turned ever so slightly, it was all wrong for a jay. It had a stout yellow bill and a red eye-ring. It flew a few feet further from us. A bright red belly flashed as it flew. It perched briefly, showing us its iridescent green back and oxidized copper tail. Then it disappeared into the dense oaks rising up the canyon side. We had a definitive sighting of the Elegant Trogon, a very good, much sought after, southeastern Arizona specialty. For a second time today, the birding gods had smiled. 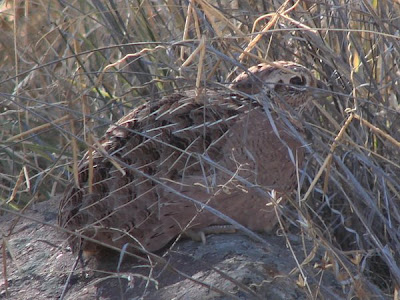 The first time they smiled, Montezuma Quail appeared. The cock looks like a harlequin; the hen like oak leaves. These small, plump quail spend most of their time not being seen. They forage with glacial rapidity along the ground. When danger approaches - such as a birder seeking to build his life list at the quail’s expense - the wiley quail transforms itself into just another rock on the ground, invisible among all the other rocks, while the birder goes on by, oblivious to the proximity of his prey. In the great unlikelihood that the birder happens to stumble along the rocky ground that contains rock-disguised quail, they will burst into flight, scaring the bejezzus out of the birder before vanishing into the grasses fifty feet away. But at least the birder, if not too particular about examining a new bird, has added a new tick to his life list.

However, that did not happen to us. We were driving very slowly up the mountain road. The hillside was covered with dry grasses and scattered live oaks. I was not looking for birds; I was avoiding rocks and ruts, and easing the car across the washboards at a three mile per hour clip. Then my spouse said, “What’s that in the grass?” 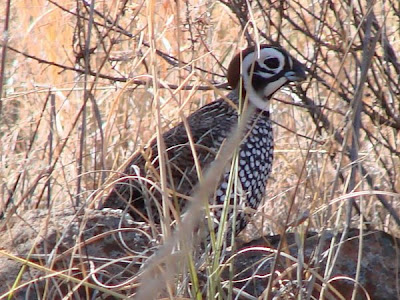 A Montezuma Quail in his carnival mask stood erect; a few feet away a hen also stood erect. We grabbed our binoculars. The birds studied us with an expression of clueless interest. I pointed my camera, hoping the fickle auto-focus would work.

Then I blinked, and the cock had disappeared. The hen became a rock on top of a rock. I eased the car past the spot and pulled to the side. The hen was still an immobile rock on top of a rock. I circled wide and climbed the bank, hoping to find the cock somewhere in the grass. Certain I could find him, I stumbled carefully over the rocky ground. I took two more steps and flushed a dozen quail. They burst into flight, scaring the bejezzus out of me before disappearing a few yards away.

But before I flushed the covey of Montezuma Quail, I had a clear and satisfactory look at this secretive and elusive bird. Why? How is it that on the same day, I also saw the much-sought after Elegant Trogon? I would like to credit by superior virtue, or my exceptional skill. I would like to tell you that I had earned these two life birds, that life is fair and merit is rewarded. But I could only give you such answers while standing in a herd of bulls.

The truth is, the birding gods - capricious and arbitrary spirits that they are - smiled. As I did on other occasions during this vacation, this evening when I lifted a cup of nectar, I first toasted the birding gods and scattered a few drops as a grateful libation.

But I only ever scattered a few drops! Those gods don’t always smile.

Note: The bird finding guides from the American Birding Association are the best resources for finding birds. I forgot to pack my copy of “A Birder’s Guide to Southeastern Arizona;” the first day in Arizona, I bought a replacement copy. If an ABA guide is available for an area to which you are traveling, get it! See the link under Bird Resources.

Email ThisBlogThis!Share to TwitterShare to FacebookShare to Pinterest
Posted by Chris Petrak at 6:00 AM
Labels: Elegant Trogan, Montezuma Quail