The Mystery of Bird Names 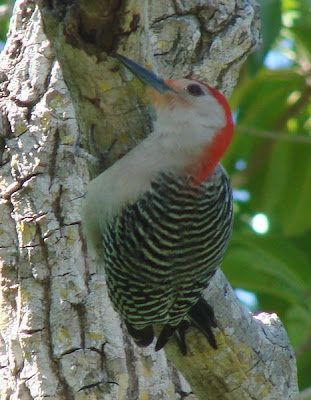 I once had an e-mail from a reader who reported a Red-bellied Woodpecker at his bird feeder. Then he mused, “I wonder where names like this come from....shouldn't it be Red-back-part-of-head Woodpecker? Why Rose-breasted Grosbeak instead of red-breasted? Why Red-breasted Nuthatch instead of rose, or reddish tan?”

His questions could serve as an English teacher’s example of a conundrum. Why the common names of birds are what they are is a mystery. To be sure, the Red-bellied Woodpecker does have a red-belly, but it is almost never seen in the field, even by those who see and study the bird frequently. The red-belly can be found when the bird is being held in the hand, and the prominent white feathers on the belly can be parted to reveal the underlying red. Hardly a dominating field mark! It has a black and white zebra-like back, prompting some people some place some time to call it the Zebra Woodpecker. Or how about one of its other folk names? - the wonderfully mysterious, “Cham-chack.” “I saw a Cham-chack at my feeder today!” That conveys a life, an excitement, that sends “red-bellied” to a place on the bench reserved for fourth string players.

Continuing my e-mailer’s musings: Why Rose-breasted Grosbeak instead of red-breasted? Good question. I have described the brilliant red throat which barely descends to the breast as blood-red. Roses come in all kinds of colors, but the red rose is the special domain for the lover wooing his lady-love. The “red-rose” -breasted Grosbeak is like a feathered Romeo who full throatedly serenades his Juliet in the Spring. But alas, he is spurned, and he bleeds a great drop from his broken heart. Then there is the folk name reflective of a time when violence was more common place: “Throat-cut.” Imagine also a more rural time when your survival depended upon the produce of your garden; you wage a constant battle against the insect vermin. Potatoes are especially susceptible to certain bugs. You notice a bird foraging through your potato patch. You don’t much care about the brilliant red throat or the bold black and white wings. You may even be seeing the dull brown female of the species. But you are glad to have the “Potato-bug Bird” helping in the fight against the potato bugs.

To my thinking, bird names lack imagination, beauty, and poetry. They also lack consistency, and often sense. But there seem to be some criteria that apply ... some of the time. For example, there is geography. The Northern Cardinal is the only cardinal to range as far north as Canada; others are tropical or sub-tropical. Our cardinal’s only other North American relative is found along the southern U.S. border, the Pyrrhuloxia, a bird with a name that is unpronounceable and of mysterious origin. Or there is the Carolina Chickadee, a bird of the southern states (including especially, I suppose, the Carolinas). It has a black-cap and looks almost exactly like the Black-capped Chickadee of our area. The name of the latter is based on a characteristic of its plumage which it shares with the Carolina Chickadee. (Redundancies noted!) 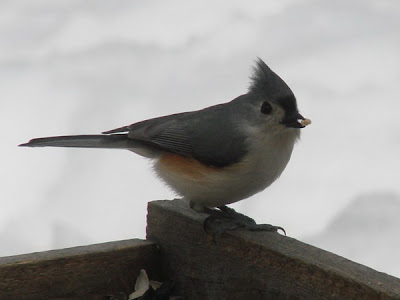 The Tufted Titmouse is a close relative of the Black-capped Chickadee and also has a name based on a distinguishing feature of its plumage - its “tufted” crest. But, all four North American titmice have tufted crests. However, the Oak Titmouse of California prefers oak habitat, while the Juniper Titmouse of the southwest prefers juniper habitat. Habitat preference, you might correctly conclude, is yet another criterion that sometimes applies when naming a bird. I have no quarrel with the name, Tufted Titmouse, but I also like the folk name: Peter-bird. With the first signs of a break in winter, you can hear the cheerful song of the Peter-bird: “peter, peter, peter.”

Another criterion is hemisphere: for example, American Robin, American Redstart, and European Widgeon (The last is a rare but regular North American visitor.) And then there is commonalty: Common Loon (not so common until recent conservation efforts), and Common Merganser (sometimes outnumbered by Hooded Merganser in our waters). Our local snipe use to be “common,” until it was split from its European relative and resumed its former name, Wilson’s Snipe. Alexander Wilson was America’s first true ornithologist; the birds bearing his name (plover, warbler, storm-petrel, phalarope, snipe) may have been first identified by him, or later named in his honor. That is yet another criterion sometimes used in naming birds - if you discover it, you can name it - after yourself if you have a rampant ego, or after a friend, mentor, lover, or whoever ... or whatever. 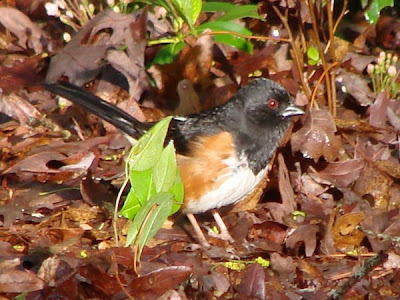 The naming of birds is fickle and inconsistent. The Baltimore Oriole (which sports the colors of Lord Baltimore, founder of Maryland) and Bullock’s Oriole (I don’t know who he was) were lumped into one species as the Northern Oriole. Then they were split and we again have the Baltimore Oriole and the Bullock’s Oriole. The Rufous-sided Towhee and the Western Towhee were lumped to become the Rufous-sided Towhee, then they were split to become the Eastern Towhee and the Spotted Towhee.

Presumably, when a single species is split into two or more species, the names assigned to the new species are “new” so as to prevent confusion with the old names. Hence the disappearance of the Rufous-sided Towhee. (Alas!) But when the Canada Goose was recently split into two species, confusion was allowed to reign: the new species are Canada Goose and Cackling Goose. Is there not a saying that attributes consistency to the small-minded?

The Rock Dove has finally been recognized for what it is and has been renamed the Rock Pigeon. Long before these birds became urban pests, they nested in caves in rocky precipitous cliffs. They still nest is such places, even though there may be no natural stone in sight: on bridges, in bell towers, building cornices, cupolas. The “rock” in Rock Pigeon is an historical reminiscence. 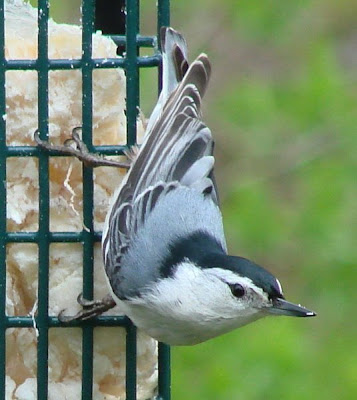 So who’s responsible for the bird names? Or if you prefer, who’s to blame? The American Ornithological Union has the responsibility in North America. Their efforts may provide outside observers like myself with limitless material for a weekly column. But, the AOU imposes an order and consistency across the continent which allows Vermonters to converse with Texans (if we must) about a bird without having to sort through different names for the same bird. There’s enough problem with the way those people use their vowels and clip their syllables.

But listen. I’ve got an ank-ank and a topsy-turvy at my feeders, so I’ve got to go. Good Birding - whatever you call them.