After three weeks in Arizona, my blood thinned and I have been avoiding the cold. But the weekend gave slight hints of spring, and Northern Hawk Owls are being reported around New England. I chose the one in the NH lakes regions - also the closest. After writing about the good luck with elusive birds in Arizona, going for the owl was at the other end of difficulty. I approached Copper Harbor on Rte 25 and the vicinity where the hawk owl was being reported. There were cars parked along the roadside and a small crowd of people with binoculars, scopes, and cameras. Before getting out of the car, I saw the owl perched on a utility pole. For about a half hour it flew between perches and hunted over the snowy field.

A similar thing occurred the first time I saw the hawk owl in '01 in northern NH near the presidentials. On a bitter cold day, we drove to the small airport where the bird was reported. "Where do you think we should look?" my spouse asked. "How about the top of that tree," I replied.

As we all know, most birds are not so cooperative. This is a beautiful little owl with many hawk-like characteristics (hence the name). Good to see it. Good to get out and see birds. 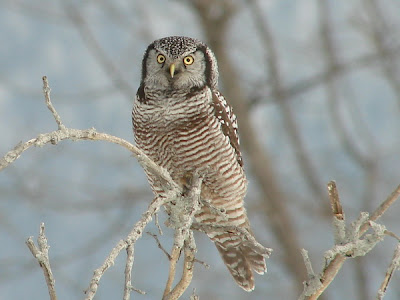 Digiscoping with my 20x60 eye piece is producing some sharp images. The slight blur at the bottom is from a rain drop I missed. 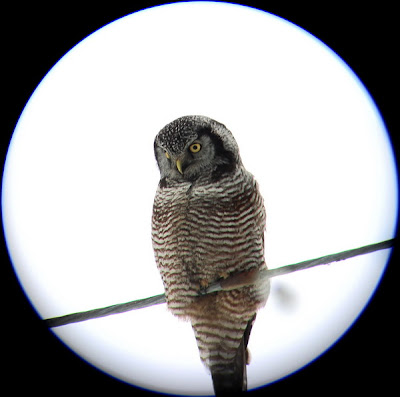 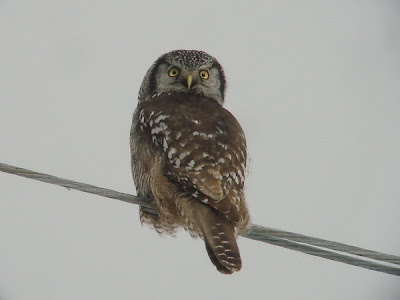 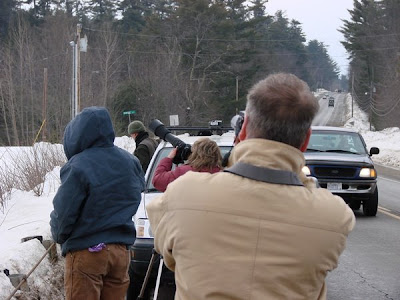 Email ThisBlogThis!Share to TwitterShare to FacebookShare to Pinterest
Posted by Chris Petrak at 8:53 AM
Labels: Northern Hawk Owl

Such a stunning photos of the owl!! I love all of the details in its chest. This is a complete newbie question but I don't know that much about owls. I thought they slept during the day. Why is it out in broad daylight and posing for pictures?

I will get an owl photo someday!

It's a bird of the boreal forest - in summer the days are long, so it often hunts during the day. I think the yellow is an indication of day-hunting owl. Barred owls have black eyes and usually hunt only at night. But when they're hungry, they also hunt during the day. The hawk owl rarely comes south; this year there are several - probably food shortage. I have also seen short-eared & snowy hunt during daylight. The way this hawk owl posed, I suspect that a lot of great pictures were taken by a lot of people.