Here in the Northeast, our most familiar woodpecker is the Downy Woodpecker. It is not abundant, but it is certainly common. If you have a suet feeder in your backyard, you probably have downies visiting it at least once a day. During any month of the year, you will see a Downy Woodpecker during a day of birding. However, at any one time you are most likely to see only two, a male and a female. The exception to this highly generalized rule is during the summer when young have fledged and the parents are feeding them. The Downy Woodpecker, like most woodpeckers, is monogamous, and tends to stay that way through the year. It does not gather in flocks of its own kind.

There is an exception to this generally monogamous trait among the woodpeckers, although “exception” is too limiting. The Acorn Woodpecker simply pulverizes the rule. 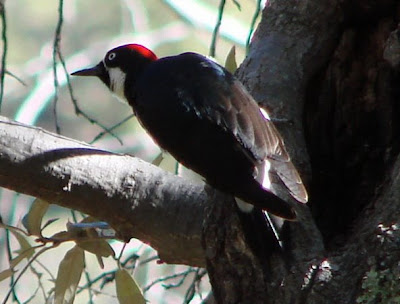 During our January travels in southeastern Arizona, whenever we went into the mountains where there were oak forests, we encountered Acorn Woodpeckers. But we never saw just one or two. We saw four, or six, or a dozen - busy, noisy, active, and acrobatic.

The Acorn Woodpecker is described by nearly all bird guides as “clown-like,” a reference to its bold yellow, red, black, and white head and face pattern and general physical bearing. It looks like a clown drawn by a caricaturist artist. Its behavior further invites the observer to anthropomorphize it as a clown.

The Acorn Woodpecker lives in a family group year round. Its name come from its favorite food - acorns. The preferred habitat is an open forest with a mixture of oaks, so that if one species of oak produces a poor acorn crop in a year, another species may be able to take up the slack. The birds excavate small acorn-size holes in a granary tree and in each hole they store an acorn. Some of these trees are used generation after generation, and contain up to fifty thousand tiny cavities for storing acorns. The stored acorns are an important source of food during the winter and through the breeding season. 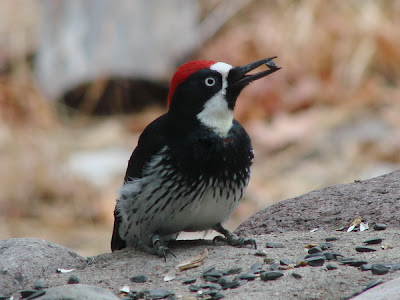 Acorns are the main food, but the Acorn Woodpecker will also flycatch. When feeders are available, it will happily eat sunflower seeds and store those seeds in its acorn granary. Peanut butter, suet, and the nectar of hummingbird feeders are also consumed.

What is unique to the Acorn Woodpecker is the way in which the family group structures itself socially. It is a cooperative breeder. Several generations work together to raise a new generation.

Cooperative breeding is quite common among birds, but the Acorn Woodpecker has given cooperative breeding a bizarre twist which may be unique in the bird world. Walt Koenig, a research zoologist at the University of California, Berkeley, has studied the Acorn Woodpecker for thirty years. From his long and persistent study, he has been able to describe the bizarre (Koenig’s term) social behavior of this species.

Acorn Woodpeckers live in groups composed of up to 6 co-breeder males, 3 joint-nesting females, and non-breeding helpers of both sexes.

Co-breeder males are brothers and/or fathers and their sons; they compete for matings with the joint-nesting females, who are sisters or a mother and her daughter who lay their eggs in the same nest cavity. (Tell me Freud couldn’t have a field day with this!) Offspring produced from this communal nest may remain in their natal group for several years as non-breeding helpers, during which time they help feed younger siblings at subsequent nests. 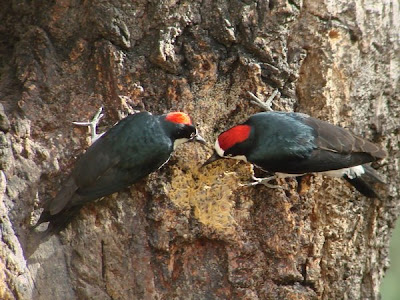 This kind of mating system is known as “polygynandry” - multiple breeding males and multiple breeding females. All individuals within the group are close relatives except that co-breeder males are not related to joint-nesting females. Incest avoidance is maintained because helpers only inherit and become co-breeders following reproductive vacancies when the breeders of the opposite sex die and are replaced by unrelated birds from elsewhere. Reproductive vacancies are often filled by a unisexual set of siblings who compete against other sibling groups in spectacular events called power struggles. Winners of power struggles become co-breeders in the new group; losers return home and resume non-breeding helper status.

It ought to be clear why Walt Koenig use the words “Group Sex” when he gives a talk on these birds. But his title also includes: “and Other Bizarre Behavior of Acorn Woodpeckers.” There is more.

There is a great deal of competition for reproduction within groups. Females do not begin laying eggs at the same time. The female who lays a first egg is likely to have that egg destroyed by another joint-nesting female. Then the second female lays an egg, and the first female destroys that egg, and so on ... until eventually they are both laying eggs at the same time and the removal of eggs ceases. The eggs which are removed from the nest are placed in a tree where group members come and eat them. Since joint-nesting females are close relatives, birds are destroying eggs that are also related to themselves!

A pair of joint-nesting females may lay as many as twenty eggs before an eventual clutch of 8 (plus or minus, but up to 17 eggs have been recorded in a single next) is incubated. Finally, the destruction ceases and the entire family group, including the non-breeding offspring of the breeding adults, turns to the task of raising young. Incubation is by the breeders at first, but the helpers soon join in. Incubating birds take turns, sometimes changing places many times each hour. When the eggs hatch, there is cooperative parenting and communal raising of the young. 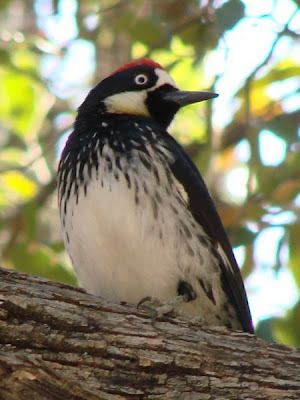 Watching the Acorn Woodpeckers on the ranch in Cave Creek Canyon was a riot; they hurried from sycamore granary to feeders to oaks and back and forth. Imagine the Three Stooges multiplied by four - or Keystone Kops chasing one another from one branch to the next to the next. Each Kop wears a red beanie and sports the goggle-eyed expression of something that just escaped from the asylum. And this was only January. What will they be like when the breeding season approaches and the hormones crank up?

There was no television in the mountain canyons where we stayed on our Arizona vacation. We certainly did not need it. The Acorn Woodpeckers provided premium entertainment with no pay per view. That’s good birding!

Material for this column came from a public lecture by Walt Koenig and the website of UC Berkeley’s Hastings Research Center.

Email ThisBlogThis!Share to TwitterShare to FacebookShare to Pinterest
Posted by Chris Petrak at 6:00 AM
Labels: Acorn Woodpecker

Wonderful post - your last line about premium entertainment brought me back to my first Acorn Woodpecker sighting while camping in New Mexico. We arrived and set up in the dark, but the next morning we discovered our site was a flurry of Acorn Woodpecker activity. A great way to spend a morning!

Fascinating. I had no idea that Acorn Woodpeckers had such complex sex lives. I have often seen large numbers of them in California and watching them is way better than TV.