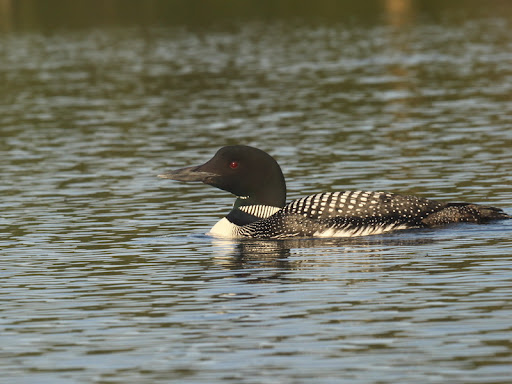 Eerie. Haunting. Mysterious. Other worldly. Carrying across the still water in the mistiness of early morning or the dimming light of evening, the song of the loon is the song of the wild and untamed.

As summer has moved along, the over-filled days of modern living have dissipated, and I take my kayak to a small lake high in the hills. Mixed pine, spruce, and hardwood forest encircles the water with its protective quiet. Moving slowly over the mirror surface on a warm summer evening, the noise of life is far off - perhaps a distant dog bark. Overhead a kingbird buzzes a short and high-pitched call. Hidden in the forest, the ethereal evening song from a thrush crosses the still air. Just ahead, a small round object moves across the surface, then quickly dives; its broad tail slaps the surface, warning other beaver of an intruder. Rippling circles move out from where the beaver dove and only the quiet evening remains.

I am paddling across a lake where Common Loons have been occasional visitors for the last several years, and this year where a pair of loons are nesting for the first time.

Icons of the pristine wilderness and secluded lakes, loons have faced serious threats from a host of human caused changes to their habitat: development, acid rain, industrial pollution, and even lead sinkers from out-door loving sport fishermen. In the mid-1980s, the number of nesting loons in Vermont was only seven pair. The Vermont Loon Recovery Project has significantly improved the status of loons in the state by working with citizens, hydro dam operators, lake associations, state agencies, and other conservation groups. Typically, loons do not nest until they are seven year olds, so it has taken time for the project to show results. The results are being seen; since 1994, there have been 2-6 new nesting pairs in the state each year. 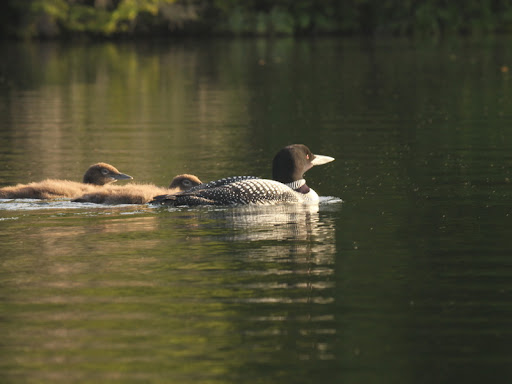 I sit as still as I can in my kayak, watching the loon with the two chicks. Further off, another loon calls, and I see the second parent approaching. The supervising adult swims with the chicks to meet the mate. In the thick beak, it carries a small fish. To my surprise, they come within a few yards of my kayak. The fish is passed from one parent to the other, but it does not appear that the fish is fed to either chick. Instead, I think the fish is dropped in the water. One parent watches attentively as the chick looks under water. It seems as though the adult is coaching the toddler in how to get the food, giving it an early lesson in fending for itself. The chick dives briefly. Perhaps it is beginning to get the hang of it.

Outside of North America, loons have been known as divers. They are superb at it. They hunt from the surface with bill and eyes submerged. Then they dive, staying submerged for an average of forty seconds and descending to a depth of as much as 250 feet. Their bones are denser than those of other birds, an assist to the diving. Plumage is also dense, keeping them waterproof and warm. Their legs and feet are far back on the body, giving them good propulsion when swimming and diving. “Whether it be fishing in deep water and rolling billows, or engaged in eluding its foes, it disappears beneath the surface so suddenly, remains so long in the water, and rises at so extraordinary a distance, often in a direction quite the reverse of that supposed to be followed by it, that your eyes become wearied in searching for it ....” So wrote John James Audubon.

Loons are so well adapted to life in the water, that they can barely manage on land. They push themselves forward on their breasts; walking is almost impossible. The large loons, like our Common Loon, cannot take off from land. They need a relatively large body of water so that they can run along the surface, beating their wings rapidly, until they get up enough speed to become airborne. 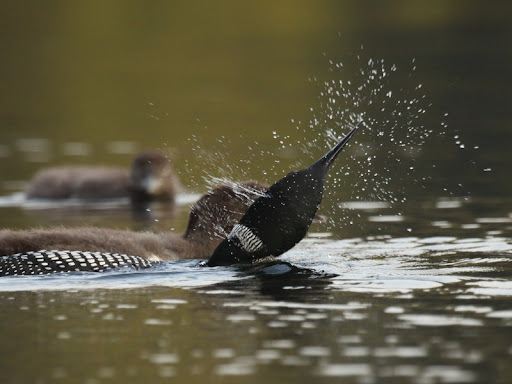 This awkwardness on land is probably the reason for their name. “Loon” seems to derive from the Scandinavian languages and means “lame,” or “awkward” - as in the lame or awkward way the bird moves on land. But then the associations of the language continue to evolve. The call of the loon is often described as moaning, or wailing. By the mid-17th century, the English language associated the wailing of the loon with the wailing of lunatics in an asylum - hence “crazy as a loon,” and “loonie” - a fool.

Science has been more kind, though not accurate, in the naming of our Common Loon: Gavia immer. “Gavia” is from the Latin for seagull, which the loon is not. Johann Forster, an ornithologist and companion of Captain Cook, gave the loon genus this inappropriate name and taxonomists have allowed it to stand. “Immer” means “diver,” so the scientific name is half right.

Loons are “old” birds. Bird fossils from twenty million years ago closely resemble modern loons. The resemblance of loons to waterfowl (ducks and geese) is only a resemblance, not a relationship. Some studies have suggested that the loons are related to auks (murres and puffins) and gulls. Others suggest the grebes, and yet others the tubenoses, penguins and frigatebirds. In other words, their closest relatives among the birds is unknown.

What is known is that the loon is a bird of the wilderness, encountered on the forest protected lakes on the north country. There the haunting sound of the loon takes us far from the noise of traffic and drone of the media, calling us to be still ... be calm ... allowing us to re-create. 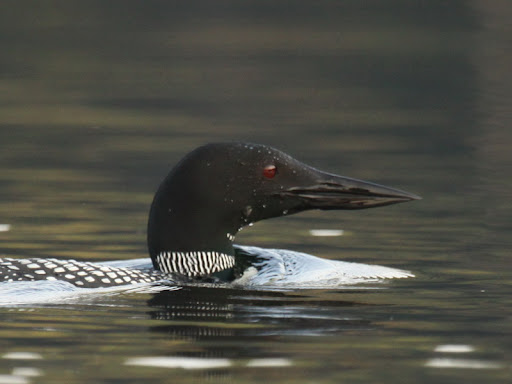 Arthur Charles Bent began the loon’s life history with the place where it raises its young: “The woodland lakes would be solitudes, indeed, did they lack the finishing touch to make the picture complete, the tinge of wildness which adds color to the scene, the weird and mournful cry of the loon, as he calls to his mate or greets some new arrival. Who has ever paddled a canoe, or cast a fly, or pitched a tent in the north woods and has not stopped to listen to this wail of the wilderness? And what would the wilderness be without it?”

Email ThisBlogThis!Share to TwitterShare to FacebookShare to Pinterest
Posted by Chris Petrak at 6:00 AM
Labels: common loon

Great post with interesting commentary and wonderful photos. I have never seen loon chicks in person, and the adults only a time or two. Wish I were out in kayak right now!

Very informative Chris plus some great photos. Particularly liked the last close up.
I've only had very infrequent sightings of Divers & usually during very poor weather in the depth of winter. FAB

Great post! It's packed with information, and so well written; I wished all learning would be this enjoyable.

HI Chris,
One of my favorite bird! It is so majestic and beautiful with its black and white pattern. We have them here too and I got some nice shots this year that I still did not publish on my blog. I keep them for the winter.
Yours are wonderful shots and the text is also very nice. It reminds me of the peculiarity of this bird.

I think this is my favorite Loon post of all! You got excellent photos! So glad to see 2 loon chicks! This year on our lake, we only had one loon chick survive and I've been monitoring its progress for Michigan Loonwatch. That last photos was especially wonderful - I love how he's coming out of the water like a submarine!
Next weekend I will be out on my kayak and hopefully catching new photos of my loon chick.