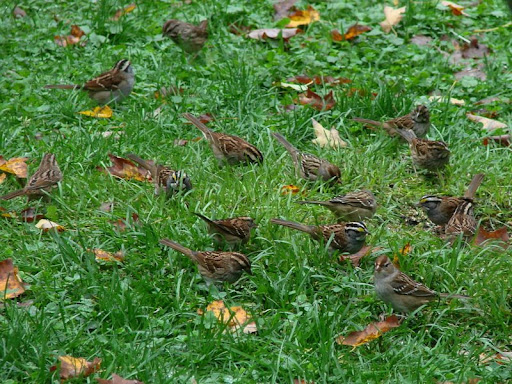 When I lived in western Pennsylvania twenty-five years ago, there were a number local idioms and grammatical quirks which I had to get used to. If a person was expecting company, they had to “red up the house” in preparation. Out for an evening walk, they “went the street down.” Early in our sojourn, my wife was holding our two year old daughter as she hid her face from the unknown people around her, prompting someone to remark, “Your baby’s strange,” which we were happy to learn meant “shy.”

Recently I learned another western Pennsylvania colloquialism when friends, both distant natives of that region, were visiting with us. We were sitting at the kitchen table with morning coffee, watching the activity at the bird feeders. John, a retired forester, knew most of the birds which paid the feeders a visit. I was refilling the coffee mugs when he said, “Ah, look at the different sputzies.”

“Sputzies?” I asked in mid-pour as I looked at the feeders.

“That’s what we called nondescript birds - that’s just a sputzie.” 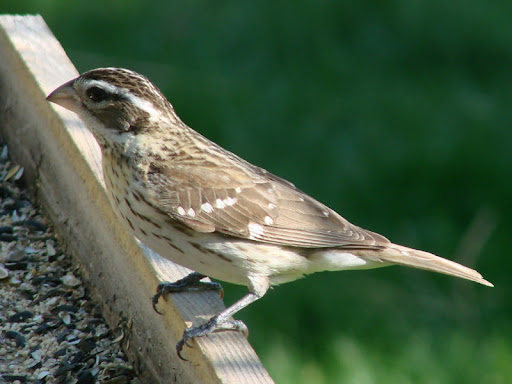 There were three “sputzies” at the feeder, all females: House Finch, Purple Finch, and Rose-breasted Grosbeak. They are distinguishable from one another, but the term “nondescript” is still very appropriate. Each in its own way is streaked brown and white; there is nothing about any of them which draws particular attention.

When birders ooh and aah at some songbird, they are usually oohing and aahing at a male bird. The brilliant red bib of the Rose-breasted Grosbeak is augmented by the flashy black and white of tail and wings, and often earns the bird a place among a birder’s “favorite birds.” The contrast between the conspicuousness of the male and the drabness of the female could hardly be greater. But it is not unusual.

The striking difference between the sexes of such birds (called sexual dimorphism) probably serves a number of purposes. The color and song of the male is a sexual attractant; it aids in establishing and maintaining his breeding territory against rivals. It may also be a defensive tactic against predators; he draws attention to himself and away from the female and the nest, both of which remain inconspicuous and hidden.

Of course, not all species adopt these breeding techniques. Sometimes the females are simply duller looking than the males: for example, Evening Grosbeak, Eastern Towhee, Northern Cardinal, American Goldfinch, and many warblers. 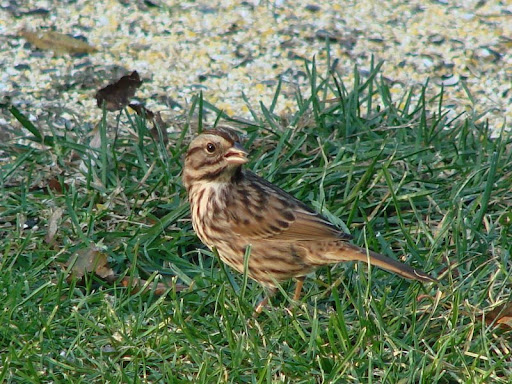 Often there is no distinguishable difference between the sexes: for example, chickadees, titmice, thrushes, crows, and jays. The birds know the difference, and that’s all that matters.

And, not all sputzies are females. Sparrows are almost all sputzies. Distinguishing one species of sparrow from another often requires careful observation. Song Sparrows are common, sometimes abundant around my bird feeders and I often pay little attention to them. A few days ago I was watching the Song Sparrows more closely than usual, and noticed that one did not have the characteristic “stick pin” on its breast. It was a Savannah Sparrow. 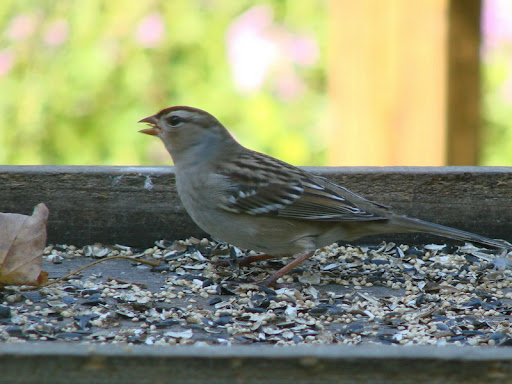 But the real sputzies of the bird world are the empidonax flycatchers. Here in the East, they are the Acadian, Willow, Alder and Least Flycatchers. You can tell they are flycatchers, but making further identification by field marks is very difficult. 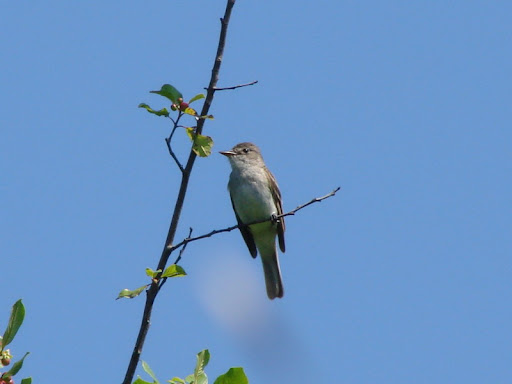 Some bird guides, for example, have only one picture for the Alder and Willow Flycatchers; for a long time these two “empids” were considered to be the same species, the Traill’s Flycatcher. There are virtually no differences in field marks, not even subtle ones, between the two species. They look alike, and their ranges overlap. The only way to distinguish the two species is by their song. In fact, song is the most reliable way to identify any of the empidonax flycatchers, and a very useful way to identify quickly, and reliably, other sputzie-like flycatchers such as the Eastern Wood-Pewee, Olive-sided Flycatcher, or Eastern Phoebe.

As an aside - don’t despair over the songs (or voice) of the flycatchers. With a little practice, they are distinguishable. Indeed, you probably know the phoebe already. It loves to nest around human structures. It arrives early in the spring and “sings” incessantly: “phoe-be ... Phoe-bee ... phoe-Bee ....” On and on and on.

Idioms do not transfer easily from one part of the country to another, but my friend’s introduction of the term “sputzie” may be an exception, at least in my personal birding vocabulary. When I am frustrated by some elusive, nondescript bird flittering around in a deep thicket or hiding in leaves high overhead, I can mutter, “Sputzie,” and move on. If I am with less experienced and perhaps gullible birding companions, I may even be able to say it with enough authority to make them accept this as an identification ... at least until they start checking the index of their bird guide.

...I like the term "Sputzie!" It's fun. Was there a large German influence in this area, because the grammar reminds me of direct translations of German....especially "walk the street down." "Putzen" means to clean....maybe sputzie started as "that little brown bird that really needs to be cleaned (just a joke, but who knows!)." ;-)
In Cincy, we have a little of that. If we don't understand someone, we say "Please?" --it comes from the German immigrants who would say "Bitte?" (which, of course, means "Please?") You can always spot the non-natives because they don't get it.

Wonderful work with the loons. I'm sure that with the ability of English to absorb any word ever conceived by man, sputzie could catch on.

Very interesting Chris. I might try "sputzie" next time I'm leading a walk & see what reaction I get! Thank goodness we only have to worry about two forms of 'Spadger' (Sparrow) over here.

To my German ears "sputzie" sounds like the diminuitive of Spatz, pronounced sputz, or sparrow. In the context it jumps out as a surprise, sounds funny and makes me smile:-)...

A really nice peice of writing there Chris. I got my first decent pic of a Willow Flycatcher last week, and yes, it called for me :-)

This bird has a funny name but it is not make it less important than the others because it is really amazing.Generic Viagra Buy Viagra

I'll affirm sputzie was used in my family as well. NE Wisconsin farming community, early '70s. Mostly Dutch in my area, but lots of German descendants as well. It just meant sparrow.

I am from Cleveland, and we use the term there too, but only for House Sparrows. Using it in Cleveland for some other little brown bird would likely get the response, "that's not a sputzie..." I have always assumed it had an Eastern European root word, so I found it interesting that it might be from German.

My ex father-in- law who was full German always called the Sparrows Sputzies. It is a German word. I said it tonight while on the deck with my husband. He looked at me as if I were from another planet. I had to come and look it up to prove to him I am not crazy. LOL

In Southern Illinois, I always heard them called spatzies, perhaps because of what was perceived as their noisy argumentative "spats."

So interesting. My 81 year old dad lives with us. To keep him engaged, we put a few feeders in our backyard. He kept using the term 'sputzie' for the small brown birds. His mother was a birder way back in the day. Now it all makes sense! We live in the south Chicago area where there was obvious German influence. Thanks for this helpful and intriguing information!

Unknown said...
This comment has been removed by the author.
9:05 AM

I like that nearly 10 years in, I'm still getting email reminders of this thread. LONG LIVE THE SPUTZIE!

I'm from Latrobe Pa which is Western Pa 35 miles east of Pittsburgh. Spatzie is another name for chip sparrows. Yes we red up the house or red the table. Worsh dishes and say yuns or yintz

My mom, of German descent, always said sputzy when she saw the small brown birds outside. A lovely memory.

I am from Pittsburgh and German. A sputzie is any little brown bird. Could be a house wren, a sparrow,....anything brown. "red" up the place I have head. "Went the Street down"...never heard that. "Your baby is strange", never heard that one before. How's come? Probably because there are some difference in jargon over near Turtle Crick then over here on the SouSide.

I am of German descent on my Dad's side and from NW Pennsylvania. A "Sputzie" to us was any small drab bird. Certainly not all that accurate in taxonomic or zoological terms, but it allowed us to save the money we might have otherwise spent on all those Audubon books..:)