The Herring Gull as a Symbol 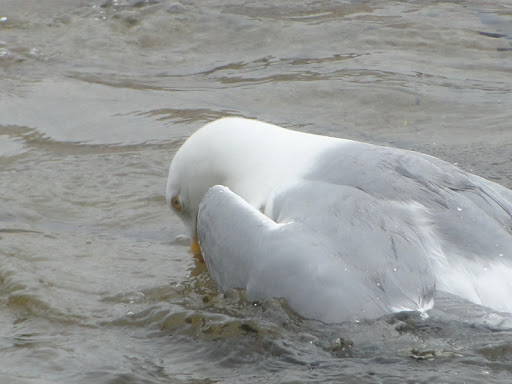 Earlier this week, I posted on my blog a series of pictures of a Herring Gull bathing. It was a mature adult bird. It stepped into a pool, dunked its head and body in the water, splashed, then stepped out, stretching its wings and shaking water from its feathers.

I took the series of photographs along the Maine coast. The sleek gray and white plumage of this large gull melded with the matte gray and black of the rocks. The only color was in the yellow beak, and the scattered flecks of pale green lichen.

Sometime afterward, I found a rather odd association working through my mind, one that related the ablutions of this gull with those of Venus, or one of her attendants. The goddess pauses for a short bath in some hidden pool. She steps from the water carefully, droplets dampening the ground as they fall from long tresses or are shaken loose from stretched arms. I had stumbled upon the scene. Secretly and forbiddenly, I photographed the sleek and graceful goddess. 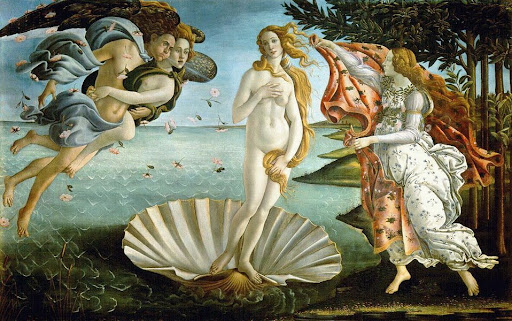 Botticelli’s “The Birth of Venus” also worked through my mind. The goddess rises from the sea. She stands naked on a shell as two Zephyrs, personification of the winds, blow her toward the shore, even as the Herring Gull, often seen far from the shore, always comes to the shore.

Can the gull be a symbol of gracefulness or beauty? On the wing there is often sensuousness in a gull’s flight as it dips and whirls on invisible air currents. Aground, at rest, or in its bath, can the gull present neatness and dignity in demeanor? - self-possession and confidence? - the allure of beauty?

I am well aware that few people would juxtapose a Herring Gull with a forbidden glimpse of a naked goddess taking a moment for cleansing refreshment, much less with beauty or sensuousness.

The large gulls are more likely to evoke an opposite reaction, one of distaste and dislike. I will be reminded by many that gulls are noisy. They eat anything. They steal food from one another. They prey on the eggs and chicks of smaller seabirds. They chase fishing boats to grab up the offal. They swirl in masses over garbage dumps. When I sat on the rocks to watch the gulls, this was the sort of behavior I was looking for and expecting to photograph.

I was hoping that I would begin to acquire photographs which would be my imitation of a series of paintings by Jamie Wyeth which I had seen a few days before at the Farnsworth Museum in Rockport, Maine. Wyeth has spent a great deal of time on the coast and islands of Maine. His artist’s eye has led him beyond the usual observations of the New England seacoast where gulls are merely background - ubiquitous, but not always noticed - a soaring outline but not a deliberate subject. Wyeth, by contrast, has often drawn and painted the Herring Gull and he has observed it: “these gulls are no white doves, but nasty pugnacious contenders for their needs and desires.”

Most of us, when we project human perceptions and values onto birds, project those traits which embody the sweet or adorable - those traits which suggest innocence and perhaps even goodness. In a complete reversal of the usual, Wyeth employed the gulls to represent the dark side of human nature, the side we would prefer not to acknowledge. His series of paintings, “Seven Deadly Sins,” links gull behavior to human behavior in a way that is evident, dramatic ... and disturbing .

Sin is not something which is much heard of, or talked about, in our wider culture. Even in the narrow culture of the religious right, sin is pretty much confined to geography located below the belt. As recent news events demonstrate, these folk often lose (or loose) the belt, and when they have the misfortune of getting caught, they lament loudly and repent, confident that God will make them better (never wondering why God didn’t keep them from being bad in the first place).

They have harbored the deadly sin, Lust. What these poor unfortunates are oblivious to is that Lust is just one of the deadly sins of which they have been guilty. There are six more, and each, according to the theology which emerged in the Middle Ages, puts the immortal soul in danger of eternal damnation. Or if you prefer to keep things on an entirely humanistic level - each can totally screw things up for the individual, and all the rest of us.

In Greed, Wyeth paints a triumphant gull standing over the pile of ice cream and pie he has claimed from some picnicker, while other gulls stand mutely in the background. This Herring Gull is but a pale imitation of the corporate bonuses and collective greed that now have the rest of the economy not just looking on, but scrambling to gather scraps.

The mouth of a single gull is over stuffed with a fish in Wyeth’s painting of Gluttony, while supermarkets and national obesity contrast with soup lines and malnutrition.

Here is the complete list of the deadly seven: Anger, Greed, Envy, Gluttony, Pride, Sloth, and Lust. If you have ever watched gulls cleaning up a harbor or feeding in a municipal dump, you can readily imagine how they might be used to personify the ugly side of human nature. 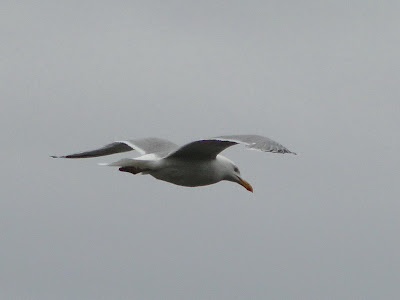 Occasionally the gull emerges as a different kind of symbol. In the Netherlands, the gull, standing for freedom, is almost a national symbol. In Utah, The California Gull (a close relative of the Herring Gull) is the state bird. In 1848, it gained a reputation as a protector of crops. Swarms of crickets attacked pioneer food supplies. Reportedly, flocks of the birds arrived, settled in the half-ruined fields and gorged themselves on the attacking crickets. The voracious appetite of the gulls saved the settler's crops ... and lives.

But I admit that I have found no hint anywhere of the gull being associated with a goddess in her bath, or rising naked from the sea on a shell. That is solely the result of my mind taking its own free journey. 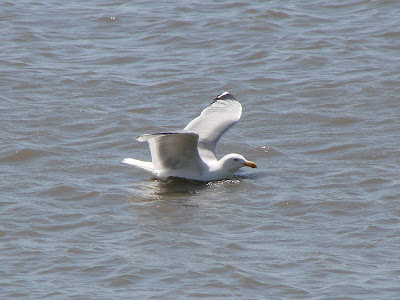 At least I know how the journey started. It began when I was looking for gull behavior which would confirm Wyeth’s using them in his series on the seven deadly sins. I did not find Wyeth in the live gulls on that particular day. Instead, I was intrigued by a sense of beauty hiding behind the ordinary and the mundane.

Birding does that to me when I slow it down enough to look - not just watch and count. Increasingly I find that makes for good birding.

Email ThisBlogThis!Share to TwitterShare to FacebookShare to Pinterest
Posted by Chris Petrak at 6:00 AM
Labels: Herring Gull

I follow your lead more than Wyeth's. When I see a gull, I see beauty and feel freedom. We don't see that many here in Cincy...

The Farnsworth's in Rockland, not Rockport.