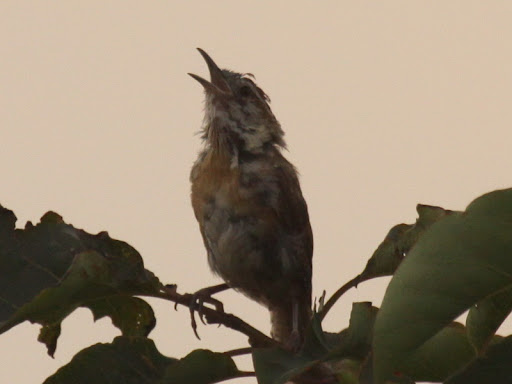 From the end of a bare branch, the Carolina Wren lifts his head and sings his bubbly song. Nearby, a second wren perches atop a scrubby bush and sings his song. Both look rather scraggly; neither sport the sleek, neat plumage seen at the beginning of the breeding season three months ago.

I speculate. One is an adult male, his plumage worn after several months defending his territory and rearing his young. Raising young can do that. The other is a young male learning to sing, imitating, repeating, and practicing the song of his species. Assuming he learns how to feed himself, avoid dangers, cope with the elements, and survive his first winter, he must then compete with other males for the opportunity to pass on his genes. During the benign days of late summer, he has time to prepare for both tasks. So he sings.

In the same weathered branches from which the wren sings, a cardinal chips loudly. The beak on this female looking bird is dark. Before long it begins fluttering its wings with the begging posture of a fledgling. Its pleading is acknowledged as the mother arrives to feed it. When the mother flies, the fledgling pursues her. 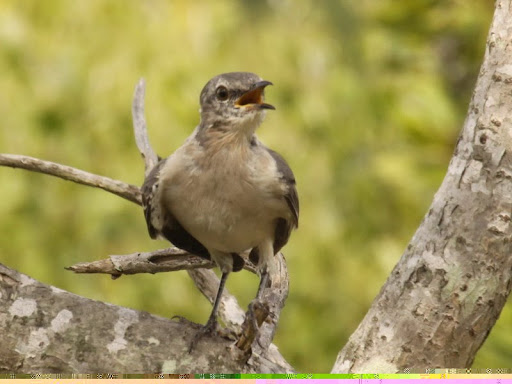 I hear the triplet mimic song of the mockingbird from some bush top. I cannot find the singer, but ahead of me a gray bird flashes white wing patches and white outer tail feathers as it drops quickly to the grass then returns to the branch. When my binoculars pick up the bird, it has the wide beak with pink of a fledgling. It calls loudly, and is soon visited by a parent with food.

A dark bird with a long tail disappears into the tangle of a berry bush entwined with vines. A second dark bird follows it. Moments later one dark bird, then a second, then a third, fly from the bush across the marshy grasses. They stop briefly on a tree branch, then drop into the tangled undergrowth. Young catbirds are following a parent, still the only source of food for their insatiable appetites which they understand.

High-pitched “sseee” comes from a dozen places in the tree tops along the field edge, and at first appearance the bird movement seems random and chaotic. Through binoculars I see dull, brown- streaked birds mingling with the handsome plumage of the adult Cedar Waxwings. The adults are flycatching, their sorties for food imitated by the younger birds who have not yet gotten the point. 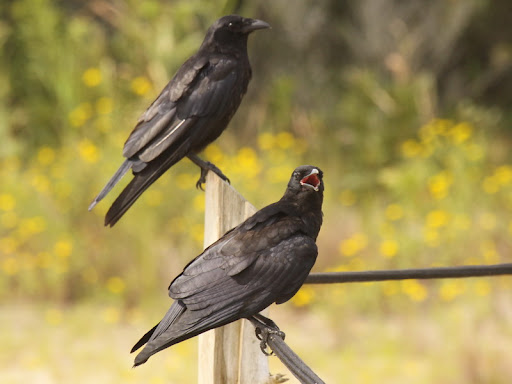 Crows are milling about on the ground. One is fussing over something dark, going through all those motions associated with scavenging on a food source. As I approach, it flies, and with another crow, stops on a nearby fence post, vocalizing loudly. With binoculars I can see its beak; it is a young bird. The adult bird that perched with it soon leads it away. I examine the food that the young crow was scavenging; it is a scrap piece of black landscape fabric, with no food value at all.

In the hot, muggy days of late August, these birds are finishing up their summer task, that of extending their species into the next generation. For some, like the cardinal, catbird, and mockingbird, this is the second brood that they are raising and will soon send on their way.

Our temperate northern latitudes provide abundant protein resources needed for hatchling and fledgling songbirds. In our narrow view, we find many of these resources annoying, but those pesky flies, bugs, caterpillars, and tiny creepy-crawlies are essential to the continuation of bird life.

The birds which I have just described do not migrate, or do not migrate long distances. They can postpone their breeding until late in the summer (waxwings, also goldfinches) or they can raise more than one brood. 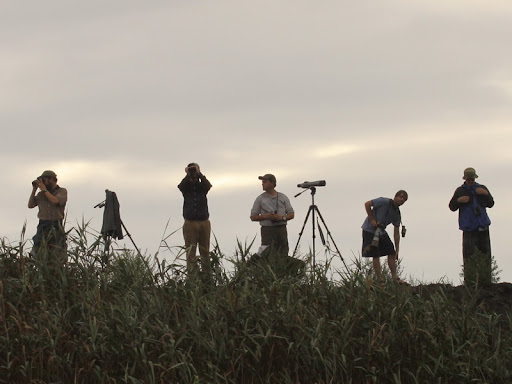 For the long distance migrants (the neotropicals) who go to Central and South America, summer is over. They are on their way. In Cape May, a New Jersey Audubon Society research program monitors fall migration with a “Morning Flight” project which counts songbirds for four hours following sunrise. The count began on August 15 and will continue through October.

I visited the observation platform at the count site early this week. At sunrise, the temperature was in the mid-70s, and went up rapidly. The humidity was over ninety percent. It was a hot, sticky summer morning.

But for songbirds, it was fall and time to go home for the winter. I saw more American Redstarts moving through the trees tops and taking flight than I have ever seen at one time. Their movement is underway in full force. In addition, there were Yellow Warblers, Northern Waterthrush, Red-eyed Vireos, Blue-gray Gnatcatchers, several species of Empidonax flycatchers, robins, Blue Jays, Northern Orioles, House Wrens, and many more.

The NJAS website describes the why and how of the project and explains: “the birds are identified in flight using an amalgam of clues - size, shape, overall color or pattern, manner of flight and (hopefully) vocalizations. It’s the toughest challenge in birding.” Many very experienced birders visit the site and stand with the official “Morning Flight” counter. They are typically reduced to observer status. After observing the morning songbird flight, I went to the wetlands of the Nature Conservancy. For half an hour, I watched an Osprey hunting over one of the freshwater ponds. It seemed like a young bird, not quite sure of how to do this. Several times it hovered, plunged into the water, and came up empty. From time to time a second Osprey joined the first one. I wanted to think that a parent was coming around to watch its progress, maybe do some coaching, and certainly give encouragement. But I don’t really know.

I thought the same thing when I watched pairs of Forster’s Terns hunting the fresh water ponds - that a parent was teaching a youngster how to find its own food. The young birds need to learn the lesson quickly. The time when they can rely on a parent is coming quickly to an end, and they will have to feed themselves if they are going to survive and pass on their genes.

I may be wiping the sweat off of my brow. I may be sitting in the river to cool down from the heat of the day. But I have many clues that summer is over. I have long since lost the battle to eat the squash as they are picked. Now they just pile up. Soon apples will be peeled and holiday pies baked and put in the freezer. Wood is stacked. In so many ways, summertime - when the “livin’ is easy” and the “fish are jumpin’” - is over. The birds know that.

...beautiful post. Loved the commentary. I can feel it too, but I'm going to ignore for a bit. Our hummers are still buzzing around--I can pretend we're the middle of July (but those cicadas and katydids sing like autumns around the corner).

Hi Chris,
You are so right, summer is ending now, but it is even worse for me as it has ended while we were in holidays in France. So coming back to Iceland is quite desperate... No birds anymore!! Well let see what the migration can bring us!