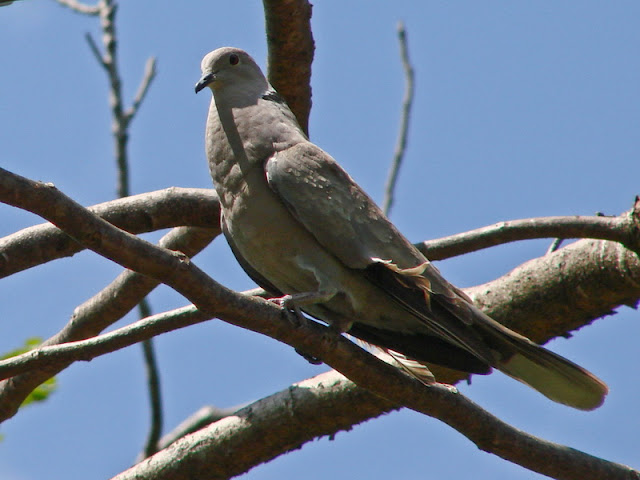 Over the Thanksgiving Day weekday, the Eurasian Collared-Dove was documented in Vermont for the first time. Homeowners in Norwich near the Connecticut River in central Vermont noticed a large pale dove chasing the Mourning Doves around their feeders. They studied the dove, ID-ed it, then called the Vermont Center for Ecostudies to report the first state record for this species. Their identification has been confirmed and documented.

Since establishing itself in Florida in the mid-1980s, the Eurasian Collared Dove has been expanding its range in the Southeast and has leap-frogged to widely scattered areas of North America. There have been a few reports from Massachusetts and New York, and its presence in Vermont has been anticipated. Last week’s confirmed “arrival” generated a great deal of excitement among Vermont’s birding community and naturalists.

A few years ago, a pale dove with a black collar was reported at a home in Brookline, Vermont, and I briefly hoped that I might be reporting the first state record. After careful study, that “collared” dove proved to be a Ringed Turtle-Dove. Soon after making the ID, I learned that several of these birds had escaped from a breeder who lived nearby. The Ringed Turtle-Dove is a common cagebird known by a variety of names such as Ringed Dove, Ring-necked Dove, Java Dove, Laughing Dove, and Barbary Dove. Because of the many common names, writers often refer to it by its scientific name, Streptopelia risoria, in order to avoid confusion.

Because of their popularity as caged birds, and because they often escape or are released, Ringed Turtle-Doves may be found any where. They may also be easily confused with the Eurasian Collared-Dove which is very similar in appearance, but with a very different life history. 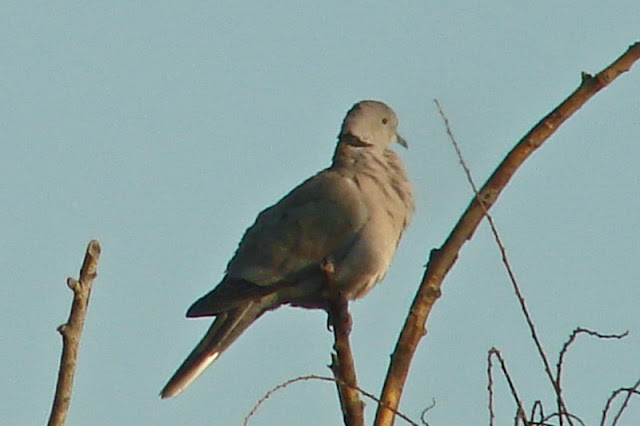 The Eurasian Collared-Dove’s (Streptopelia decaocta) original range is believed to be the Indian sub-continent. During the sixteenth century it expanded through Asia Minor. During the twentieth century it spread through most of Europe, and it is still expanding its range into Russian and the Iberian Peninsula. Colonization seems to occur in jumps of several hundred kilometers, followed by “back-filling.” It reached Britain in the 1950s, bred in 1954, and today lives in Iceland and in Norway above the Arctic Circle.

The scientific name, Streptopelia decaocta, comes from the Greek for “collar” (streptos) and “dove” (peleia). In Greek mythology, Decaocto was an overworked, underpaid servant girl. The gods heard her prayers for help and changed her into a dove so she could escape her misery. The dove’s call still echoes the mournful cries of her former life.

Decaocto escaped her cage in the Bahamas in 1974. Eurasian Collared-Doves were imported to these islands when a supplier was unable to fill an order of Ringed Turtle-Doves. About 50 doves escaped. Within ten years, the population had multiplied to at least 10,000 birds. By the mid-1980s, the Eurasian Collared-Dove made an unassisted move to Florida and rapidly expanded its numbers and range.

For a time, it was thought that the wild population of Ringed Turtle-Doves in southern Florida was suddenly growing. Then ornithologists looked more closely, and realized that a new non-native species had arrived and was spreading. By 2000, the Cornell Lab of Ornithology showed the range of the Eurasian Collared-Dove to include Florida, southern Georgia and Alabama and eastern Louisiana. By 2005, the range extended throughout the southern states and Great Plains as far north as South Dakota, and as far west as southern California. 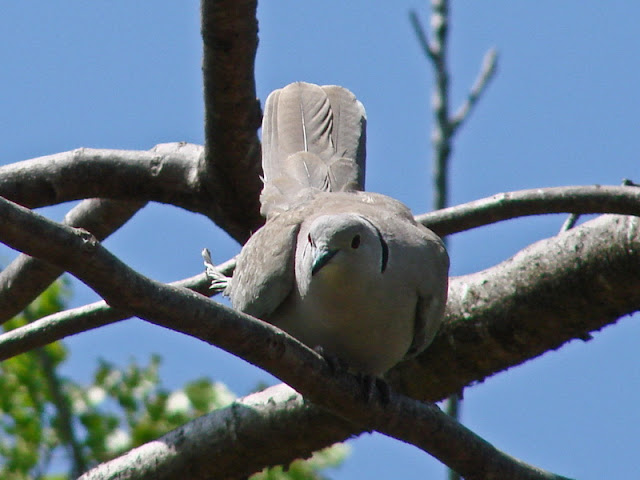 The Eurasian Collared-Dove has not yet been extensively studied. What studies have been done seem to indicate that it does not have a detrimental effect on native species (although I heard one southerner refer to them as “gray starlings.”) They appear to prefer a niche in the well developed suburbs somewhere between Rock Pigeons in the city and Mourning Doves in the open country. They feed on agricultural grains, leaves, fruits and seeds, and are drawn readily to bird feeders.

The website of Chipper Woods Bird Observatory concludes: “As these birds expand their range in North America, it will be interesting to observe the impact of this introduced species on populations of native birds, and to learn what ecological/geographical barriers finally limit their range expansion. North America has several open niches created when native species like the Passenger Pigeon and the Carolina Parakeet went extinct. Perhaps this dove will utilize part of the niche left vacant with the passing of the Passenger Pigeon and other bird species.” 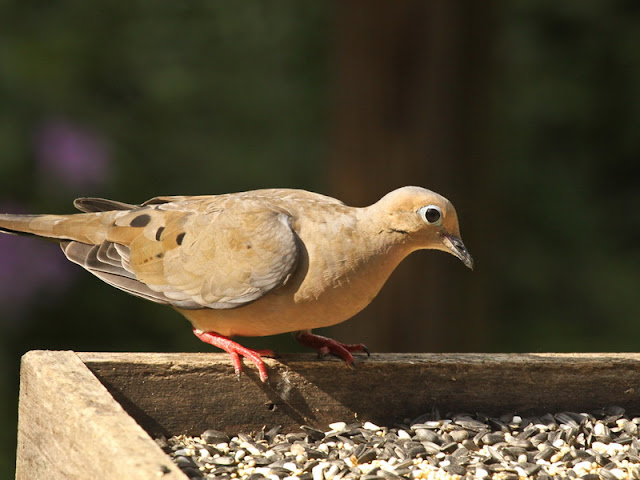 Up to now, identifying doves and pigeons has been easy for Vermonters. There is the large Rock Pigeon and the much smaller Mourning Dove, with its pointed tail, black spots on the wings, brown appearance and dark eye. You won’t confuse the pigeon with the new arrival , but you might confuse the Mourning Dove. The Eurasian Collared Dove is slightly larger, pale, has a red eye, and a thin black “collar” on the back of its neck. Its tail is broad and blunt, and the undertail coverts are gray. The Eurasian Collared-Dove is a well-established exotic in the Southeast, and is likely to expand to the Northeast. The Ringed Turtle-Dove can look almost exactly the same, except its undertail coverts are white. If it shows up, it will be an escapee.

With Ringed Turtle-Doves often escaping, and Eurasian Collared-Doves rapidly expanding, either could show up at a bird feeder. All the sources I consulted caution about how easily the two can be confused. So ... if you see a dove with a black collar on the back of its neck, you’ll know that you have either a Ringed Turtle-Dove or a Eurasian Collared-Dove. Then you’ll have the fun of figuring out which one - an exercise that always makes for interesting birding!

Email ThisBlogThis!Share to TwitterShare to FacebookShare to Pinterest
Posted by Chris Petrak at 6:00 AM
Labels: Eurasian Collared-Dove

Hi Chris,
This is a very interesting post full of interesting information. Are they no plan to stop the extension of this invasive species? I guess if this is natural it is ok, but as you mention rearing facilities!!

I heard some disturbing news about how they are culling the Turtle doves here in Egypt for food. pigeon is quite a common meal here. but dove?

Interesting post, Chris and lovely photographs!
Where I live in France, this Eurasian Collared Dove is called, I think, the Turquish Dove (Tourterelle turque).
It is invading our local dove's niche, the Wood Dove (Tourterelle des bois). This one is disappearing fast. Luckly, we still have a couple of pairs on the property and we don't see then often but their different cooing makes it easy to know which is which!
Cheers!

I am amazed that Vermont just saw it's first collared dove as I have been seeing them at my home in Iowa since 2005.

Just back from surprise of seeing these guys in Fort Collins CO and Cameron Trading Post AZ.

Saw one a couple times a couple weeks ago and then yesterday saw 2... in my back yard in Las Vegas, Nv.

I saw several here in northwest florida until a couple of years ago. Since then I have not seen one at all. Does anyone know why?