A day trip yesterday to the Massachusetts coast - Cape Ann & Newburyport area - produced good birding (which is something of a redundancy, since birding is, by definition, good - and a good way to spend a day).

About halfway through the morning, I realized that Common Loon was still absent, and made a particular point to look for it. No luck. Perhaps they were out to sea, or went - were blown - south by the recent, and rather strange, coastal storm.

Other than that, the usual suspects were present, though it seemed to be that the numbers were low. Tide was low in the morning, and the birds that were seen were rather far out, so photography was difficult.

On a day when wintering sea ducks, grebes, and alcids were the expected targets, the highlights were quite different. 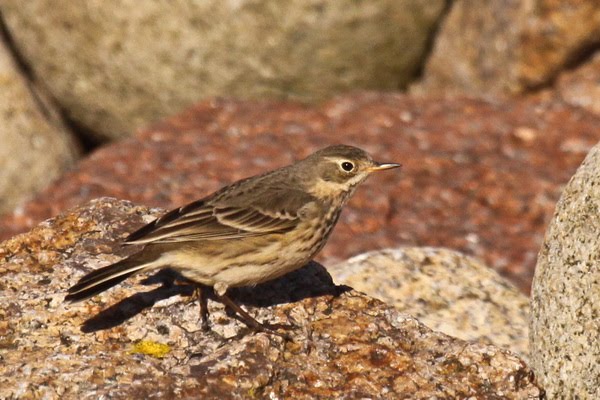 ... and at Salisbury Beach, a flock of 50+ Snow Buntings swirled around the campground. 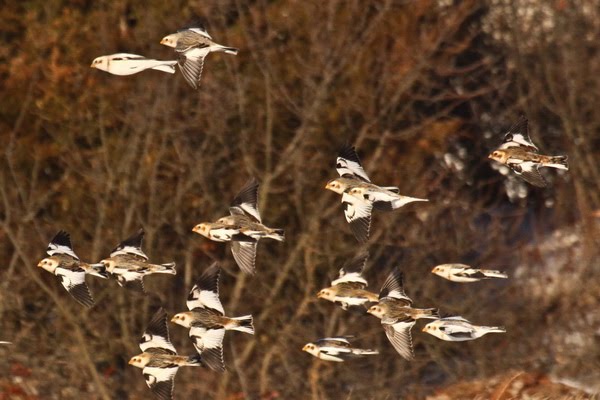 Buffleheads were quite common all along the coast. The sharp contrast between the Bufflehead's bright white hood and bright white body with the dark wings, head, and neck have made this a challenging bird to get a good photograph of, and I have yet to meet the challenge. Nevertheless, in the low angle of the winter sun, the head and neck glistened with an iridescence that was stunning. This gentleman quite apparently has his eye on the lady. 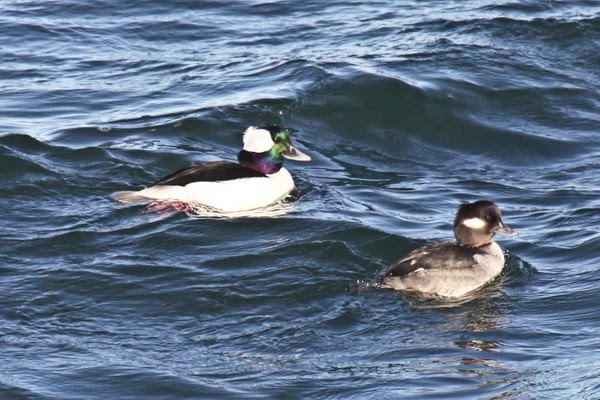 The contrasting light and dark plumage on the Harlequin Duck poses the same photography challenge as does the Bufflehead. They were quite common along our route from the Granite Pier to Andrews Point - a reliable area to see these birds if you need them for a life list. 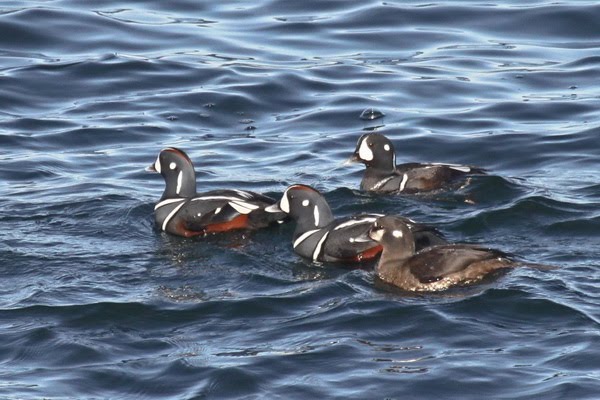 The King Eider was out to sea, or at least our of our sighting, yesterday. Common Eiders were - well, common - though there were no huge rafts as I have often see, and most were too distant for good photos. But this female was near the breakwater at the lighthouse ... Everytime I see a Pipit on someones blog I can't help but think of a Robin. Something about their body structure and stance reminds me of Robins.

I had hope to see Snow Buntings last year but never did. Maybe this year! They're such pretty birds!

Maybe that 'Queen' Eider is missing her mate down in Gloucester on Steve's blog! LOL!

Hi Chris,
This is a beautiful list of birds to see... Gosh I miss some of them so much... The harlequin is one of my favorite, it is so beautiful... Take care of them ;-) I've seen some snow bunting around, they usually come closer to city when it is raining and cold... Nice pictures you got.

Boy, you sure caught some of my favorites with this post!! Snow buntings..how nice but then those harlequin ducks..can't top those beauties..but then maybe you can with that male bufflehead!! How sweet it is! and you are so right..there is no bad day of birding..it gets one outside and looking at nature!!

Wow I love those Snow Buntings!!!

Chris, nice photos of the Pipit and the Bufflehead. I got a message that we missed the Lapland Longspurs and Horned Larks at the boat launch at the Salibury State Reservation. I think the guy feeding the gulls may have shooed them off.