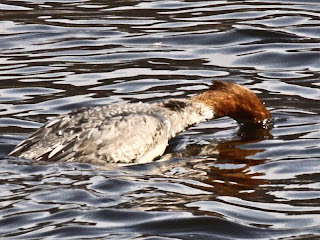 All along the coast, diving ducks are common during the winter: eiders, buffleheads, goldeneyes, scoters, mergansers, harlequins. They ride the waves, disappear beneath the surface, then pop back up like so many corks. Occasionally one comes to the surface with something in its bill, pauses a moment, swallows, then resumes doing its duck thing.

I watched a female Common Eider come to the surface with something that looked like a flattened egg. It was dark, appeared solid, and was about as wide and almost as long as her bill. Only later did I realize that she had brought a shellfish to the surface. 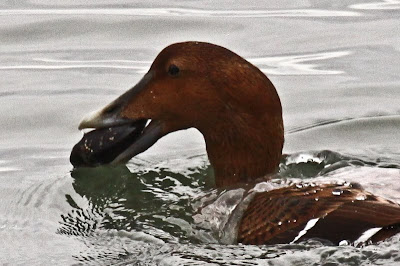 She was diving to find food. A favorite food for diving ducks is mussels, those two to three inch long, dark, oblong shellfish. They dive to the bottom, and rip the mussel, shell and all, from the colony. The eider I was watching brought to the surface an intact, tightly closed bivalve, something related to the mussel, but larger. I began to wonder: How did she get through the hard sea shell to the nutritious food on the inside?

A lot of food is protected by a hard outer shell. Plants and animals have developed defenses against those things which would eat them. The hungry foragers in turn have developed ways to breach the defenses.

Let’s take a look at our bird feeders. If you do much bird feeding, you know that sunflower seeds are favored by many, perhaps most, of our feeder birds. The edible and nutritious part of the sunflower is inside its small, hard shell. Have you ever tried to open a sunflower seed? Putting aside the fact that we are big and clumsy when it comes to handling something that small, it is nevertheless a very difficult task to break open the seed.

Many birds have no trouble. The grosbeaks and cardinals can perch on the sunflower feeder or stand on the platform and shell half a dozen sunflowers seeds in the time it takes me to write this sentence. They have powerful beaks to crack apart the hard casing. Many smaller birds are equally adept. The finches, for example, will fill the nine perches on the sunflower feeder and consume seed after seed, scattering the husks to the ground beneath them. 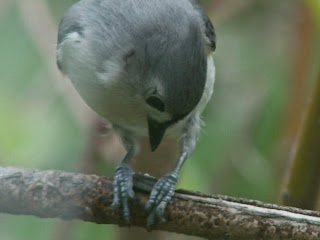 Not all of our feeder birds are as adept at opening the sunflower seeds. These birds have beaks more suited to gleaning insects along tree trunks, branches, or leaves. But they are opportunists, and our feeder food is handy. Chickadees and titmice carry the seed to a branch, hold it between their feet, and drill it open with their sharp beaks. The seeds do not yield the tasty meat easily. These small birds have to pound repeatedly before the shell cracks open. Nuthatches have a similar problem, but are not designed to hold the seed between their feed. They carry it to a tree trunk, jam it into a crack, and then pound it open. 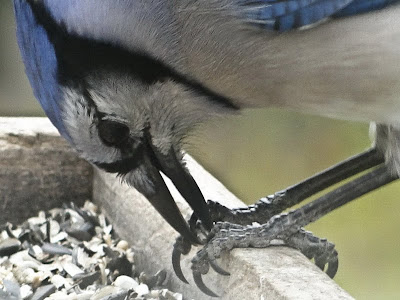 As big and muscular as the Blue Jays appear to be, they also do not have a beak designed for opening seeds. I often see them carry a seed to a branch, hold it between their feet, and pound it open. The jays also have another way of dealing hard shelled seeds. They store them in their crop. I often see a jay’s throat swell as it scarfs seed after seed. The seeds which are stored in the crop get softened up in a kind of pre-digestive soaking.

There are a lot of different ways that birds have found to crack the hard shell of a nut. My favorite is the brainy solution used by native crows in New Zealand. They drop their favorite nut on a busy road, then wait for a car to run over the nut and crack it open. To avoid the danger of speeding automobiles, some crows drop the nut in a pedestrian crosswalk, and then wait for the light to change. 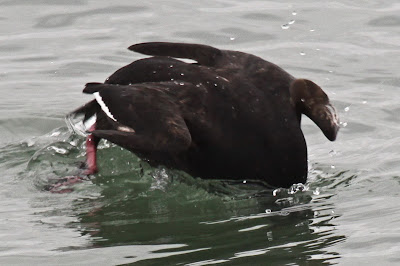 But what about those hard shelled mussels favored by diving ducks? When I did some research, I learned that opening a mussel requires a special blade and considerable adeptness. Or, the mussels can be steamed; the bivalve opens and the tasty meat is then readily accessible. I remember one time on the Maine coast when we enjoyed a dinner that consisted of a huge plate of steamed mussels. However, the combination of place, occasion, companion, and the aphrodisiacal quality of mussels banished any curiosity I might have had about how diving ducks might get at the tasty meat, or whether it contributed to a duck randiness.

Omnivorous gulls occasionally exhibit an epicurean taste for mussels and other shellfish. They carry the tightly closed shellfish aloft, then drop it on rocks - or a roadway. They repeat this exercise until the shell finally opens, or breaks. Then they dine. 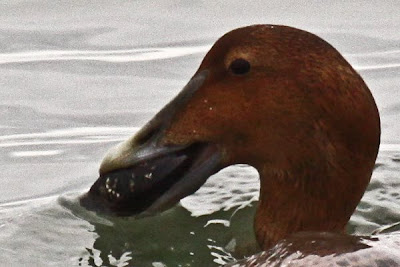 But how does the hen eider which I saw with a shellfish in her bill get at the meat. First of all, she swallows it whole. After a recent meal, I felt like the food I had consumed was resting in my stomach like a solid lump, a heavy brick weighing me down. But a mussel or mollusk, shell and all? That must really feel like a brick.

And yet, mussels are the favored food of diving ducks, and some dabbling ducks. The shellfish is swallowed whole and then the double stomach takes over. Complex contractions move the food back and forth between the glandular stomach (proventriculus) with its acids and enzymes which dissolve and digest, and the muscular stomach (gizzard) with its grit and stones which grind, pulverize, and mix. A study done on black ducks demonstrated that they can completely digest and pass a blue mussel in 30 - 40 minutes.

The hen eider which I watched with the large shellfish in her beak was unusual. Generally, they prefer smaller mussels which have less nutrition but which pose fewer problems when being swallowed.

Finally, I should add a disclaimer. Here and elsewhere I refer to the “tasty” meat, or morsel, inside the hard casing of a seed, nut, or shellfish. We may dine on mussels for their epicurean delight, perhaps their stimulus to the libido, and maybe their nourishment of the body. The hen eider which I watched was only concerned about the latter. Her complex and efficient digestive system quickly dissolves and grinds the hard shell and digests the meat. What taste buds she may have play no role in her menu selection. The diet of the eider has been determined by the remarkable and complex stomach which can digest a stone - or at least, food which looks like a stone on the outside.

Amazing post about the ducks and their digestive system. Gee, I had no idea they could swallow these shellfish whole. Great photos and post.

That's an interesting post Chris! A few things in there I didn't know. Steve over on Shooting my Universe told me the Eiders swallowed them whole but I just can't imagine it!

Those Blue Jays really do seem to struggle opening a seed, don't they!

Awesome post! Is that why the blue jays dig through all the food (scattering it all over the ground)? Because they are looking for unshelled seeds?

What a fantastic post Chris. The picture of the duck eating shell is gorgeous and the post going it is sumptuous!!! Well done and thanks!!

My mouth dropped open (sans shellfish) at this fascinating and interesting post. The photos and text together kept me going for more!
Hmmmm. Perhaps, Chris...bring your photographic, educational and writing skills into a book? Hmmmmm?

Its Time to Live said...

Great blog, words and images. Thanks.