Due to the Absence of Birds 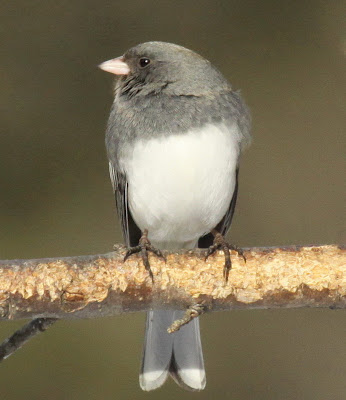 Last week I wrote briefly about the absence of birds at birds feeders, perhaps due to lots of natural food in the Canadian range where many winter birds come from, or the lack of natural food in our neighborhoods, or both, or neither, or something else. Whatever the reason, many people seem to have fewer birds at their feeders than in normal years, whatever normal may mean.

I am not being flip when I write, “whatever normal may mean.” It may simply imply, “what I expect, or what I want.”

Around my feeders, wintering finches have been absent. Except for a very brief visit by five Evening Grosbeaks three weeks ago, and a few random visits by a couple of goldfinches, there have been no redpolls, no siskins, no purples, no house. There have been no sparrows. An absence of birds.

But, all winter there have been 60+ Dark-eyed Juncos that forage through my yard every day. Last week the largest flock of Mourning Doves ever to visit my yard started coming several times a day - 50+. Blue Jays have been present all winter (about 15). Last Monday their numbers grew to at least twenty-five - had numbers been added to the original flock, or was this a new flock? The same day a flock of 15 goldfinches appeared.

The pattern for this winter’s feeder birds seems to be that the pattern can suddenly change, but I can only speak for my yard. 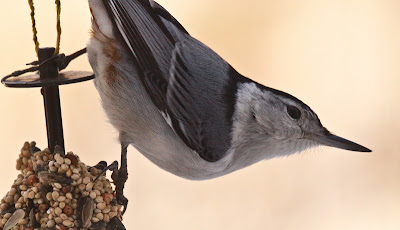 Due to the “absence of birds,” last week I wrote about one of our year-round resident birds, the White-breasted Nuthatch. I included John James Audubon’s opening sentence in his account of the White-breasted Nuthatch in Birds of America. Audubon knew all four North American nuthatches, but speculated that there were two more nuthatches to be discovered: “one larger than any of those known, in the high wooded plains bordering the Pacific Ocean; the other, of nearly the size of the present species, towards the boundary line of Texas and the United States.”

Audubon was wrong. I speculated that Audubon was trying to balance North America with Europe, which has  six nuthatch species. Why would he be concerned? Some background first. 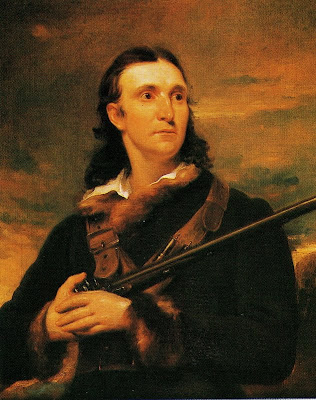 Audubon was born about 1785, the acknowledged illegitimate son of a French merchant in Haiti. He was sent to Paris to study. Then at the age of seventeen he was sent to his father’s farm near Philadelphia, and from there began his continental wandering as a businessman (unsuccessful), painter, ornithologist, and American woodsman. He returned to Europe to publish his double elephant folio, Birds of America, based upon his paintings. As he promoted his publication to European high society, he carefully cultivated the “woodsman” persona with long flowing hair and fur-trimmed clothing. Later he also published an elephant folio of his paintings of Quadrupeds of North America.

Audubon was also promoting the wonders of North America. He was continuing the long effort to bring the New World out of the cultural and intellectual shadow of the Old World, a shadow which even extended to the flora and fauna.

One of the earliest deliberate efforts to defend the New World against the Old World’s superiority in all things was mounted by Thomas Jefferson during his tenure as ambassador to the French count, 1784-1789. Joseph Ellis, in his biography, American Sphinx, writes that “Jefferson decided to refute the leading French naturalist of the day, Georges du Buffon, who had argued that the mammals and plants of North America were inferior in size, health and variety to those of Europe. Buffon’s theory, silly as it sounds today, benefitted from his reputation as France’s premier natural scientist; it also had the disarming implication of rendering the entire American environment as fatally degenerate, a kind of laboratory for the corruptive process.”

Jefferson responded to Buffon by arranging for specimens to be gathered from the White Mountains of New Hampshire - skin, skeleton, and horns from moose, caribou and elk - animals larger than any in Europe. Eventually a seven foot moose carcass was put on display, shipped from North America without the modern convenience of refrigeration or deep freezing. “Buffon, who was himself a minuscule man less than five feet tall, was invited to observe the smelly and somewhat imperfect trophy but concluded it was insufficient evidence to force a revision of his anti-American theory.” Jefferson tried to refute Buffon, but the facts did not matter; Buffon’s mind was made up. America’s plants and animals were inferior and degenerate.

Buffon’s status as the leading French naturalist resulted from his monumental Natural History, a vast encyclopedia of the sciences, parts of which were not completely published until 1804, fifteen years after his death. An assessment of Buffon in the Encyclopedia Brittannica (11th edition) concludes that without “being a profound investigator, he possessed the art of expressing his ideas in a clear and generally attractive form. His chief defects as a scientific writer are that he was given to excessive and hasty generalization, so that his hypotheses, however seemingly brilliant, are often destitute of any sufficient basis in observed facts ....”

In his day, Buffon’s scientific encyclopedia was a staggering achievement and gave him a colossal reputation; both survived as the standard of truth for decades following his death. 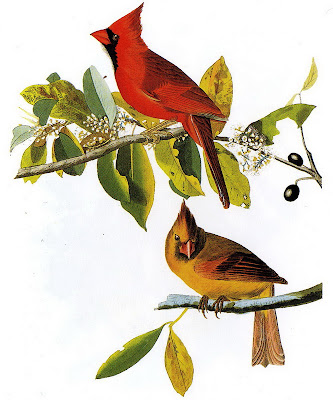 When Audubon wrote his Ornithological Biographies, first published in 1841, the scientific world was still in the long shadow of Georges du Buffon. Audubon had the hummingbirds and the colorful wood warblers, but apparently his psyche needed to counter Buffon’s European superiority with an equal number of species match. Out slipped Audubon’s assertion that there are six American nuthatches just as there are six European nuthatches. Audubon’s assertion was based on no more evidence than Buffon’s assertion for degenerate North American animals.

Audubon picked a very minor nit. For whatever reason Audubon felt compelled to defend North America. His defense was unnecessary. He provided plenty of evidence for the richness and variety of the New World in his paintings of the birds and large mammals. Today Audubon is remembered, and Buffon - who’s he?

To the historian who may happen to read this far, I apologize if I have pushed facts too far, or have flown off with flights of fancy. It is all due to the absence of birds. I’m sure they will be back soon.

Interesting essay. I read "Audubon's Elephant" a few years back; Audubon had a really unusual life (as well as an unusual take on birds).

Down here in north Florida, the bird feeder scene is as good as or better than usual. Most of our winter birds are your summer birds; right now I've got a dozen Chipping Sparrows outside the back door!

Here in central Florida, we enjoy our bird feeders so much! Have a pair of cardinals who have been here for a year or so, small sparrows, red-wing blackbirds, morning doves, blue jays, a woodpecker on our palm tree, our very large sand hill cranes and we drove by a yard full of robins 2 weeks ago! We had to stop and watch for a minute, beautiful!! We have had such a cold winter birds love our feeders!

Hi Chris,
Looks like I got the same feeling right back to November and December over here when no birds could be spotted. At least you have feeders and some visitors. Nice post about Audubon, somebody who I did not know... Nice to have part of the history of ancient people doing sicence ;-)

The first barrier to learning is assuming that you know all. And then there was his run-in with Wilson!

Yet I would swear we had a mast year for red oak acorns. Curious.

Interesting read Chris.
Similar situation over here, but I put that down to the weather and availablility OR unavailablity of their natural food sources. FAB.