Note on Photos: The photo of the Eurasian Teal in flight was given to me by Hilke Breder who saw the bird at Herrick's Cove on one of those rare occasions when it was close (relatively) to viewers. It is used with her permission. I digiscoped the 2 photos of the Eurasian Teal swimming in 2007. The Green-winged Teal photos were taken in Cape May and Texas last fall using my new equipment

Two weeks ago I was at Herrick’s Cove, the designated “Important Bird Area” north of Bellows Falls where the Williams River joins the Connecticut River. I walked all the way through the picnic area to the small sandy spit which points south. There were six birders crowded along the narrow path. The crowding was increased by the tripods and scopes set along the path, and bodies hunched over, staring through the eyepieces. 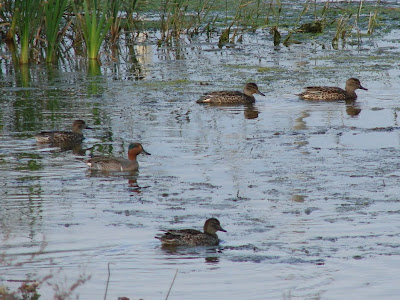 First, some background on the Green-winged Teal: This teal is our smallest dabbling duck. Dabbling ducks feed by turning themselves upside-down as they feed on plant life beneath the water’s surface. Mallards, American Black Ducks, and Northern Pintails are among the most familiar “dabblers.” Canada Geese, though not ducks, are dabblers. The Green-winged Teal has a length of 14 inches and weighs about 12 ounces. Only the Bufflehead, a diving duck, is smaller (L. 13.5 inches). The teal is slightly larger than the Rock Pigeon (L. 12.5 inches, W. 9 ounces), and significantly smaller than the American Crow (L. 17.5 inches, W. 1 pound), although comparing a duck with a song bird is like comparing apples and broccoli. 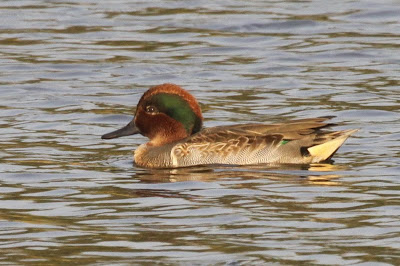 Green-winged Teal are common and widespread. Like most waterfowl, they are most often observed swimming on water, usually with other ducks, usually at a distance, and usually through binoculars or a scope. All of these conditions make it difficult to wrap the mind around its small size. Several years ago in southern Texas during the winter, I walked along a boardwalk in a marshy refuge. Green-winged Teal were feeding in the water below us, not fifteen feet away. I still remember clearly our reaction: “They’re so tiny!” 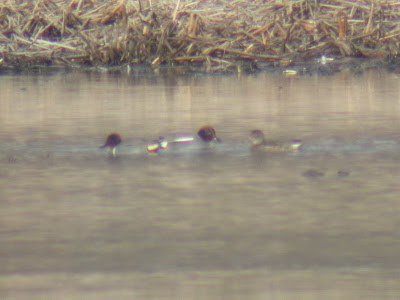 The drake Green-winged Teal is a handsome bird; he has a chestnut head with a broad green ear patch. When swimming, you can see a prominent, vertical white stripe near his shoulder. The Eurasian Teal looks identical, except that the drake does not have the vertical stripe. Instead he has a horizontal white stripe along the wing. The stripe is also apparent when he flies, if you are close enough and quick enough to notice. The two birds are subspecies of one another, though there is considerable discussion about whether they should in fact be separate species.

Serious birders pay attention to presence of subspecies, so that they are prepared to add a new tick to their life lists when the taxonomists finally recognize what they (the birders) have suspected - that many distinctive subspecies should have species status. 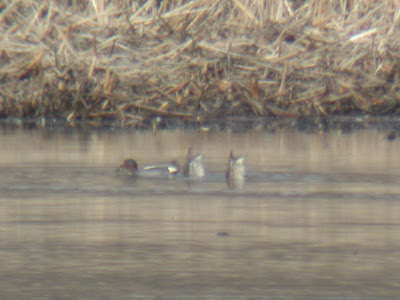 In Europe, this bird has been known as the Common Teal, and more recently has been renamed the Eurasian Teal. If I were a visiting birder from Great Britain or the Netherlands and had gone looking for the teals in Herrick’s cove last week, I would have been looking for two birds for my North American list. I would have been looking for the Eurasian Teal (Anas crecca) and the Green-winged Teal (Anas carolinensis). Under the prodding of the Association of European Rarities Committee, all of Europe recognizes these ducks as two distinct species. 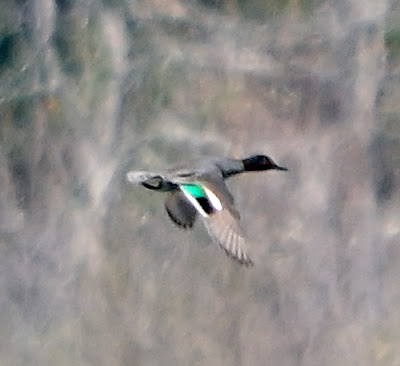 Regardless of the species status of these teal, tracking vagrant species and/or subspecies assists in tracking the movement and breeding ranges of many birds. The Eurasian Teal is a case in point. The first record of this duck in Vermont was at Herrick’s Cove in 2007. This year’s drake Eurasian Teal was the third or fourth time it has been recorded. Some questions: Is this year’s visiting teal the same bird traveling with the same flock of Green-winged Teal, or a different bird? Are we documenting a change in movement and range, or the same stray and lost bird? Or have different birds gotten lost and joined their North American cousins in their travels? And does this say something about breeding range? I don’t think anyone has any answers ... yet. Science begins by asking questions and then looks for the answers, hoping that one or two answers may appear among the many new questions that keep arising.

Occasionally the waterfowl at Herrick’s Cove are close. Most of time, binoculars and a scope are needed to get any kind of a decent look. As I was walking toward the spit where the birders had gathered, a power boat came speeding into the cove, sending all of the waterfowl into the air. When they settled down, they hid themselves in the interwoven channels and along the distant shore of the Cove below the railroad bed. Tthey could just barely be seen swimming in and out of view.

These were serious birders, and they studied the distant waterfowl intently until they found a flock of some thirty teal. Then they strained to watch the swimming drakes, most of whom seemed paired with a hen. A few times a drake could be seen displaying, whipping his head up and backward. The viewers paused on each drake, saw the vertical white stripe, then moved their attention to the next drake ... until someone announced, “Got him!”

And sure enough, there was the drake Eurasian Teal, displaying with whiplash enthusiasm for any interested hens. Few details of his plumage were visible - just a hint of the chestnut head and green eye patch - but the horizontal white stripe along his wing was clearly visible.

The sighting on that day was what birders describe as a BVD - better view desired. We don’t always get the great look at a bird that we want, so we keep looking. Birders are sometimes a strange and obsessive bunch. But they live in anticipation, and function on hope, and rejoice in those moments of fulfillment. From what I have seen of life in general, it is a good way to live.

Email ThisBlogThis!Share to TwitterShare to FacebookShare to Pinterest
Posted by Chris Petrak at 6:00 AM
Labels: Eurasian Teal

The portrait of your Green-winged Teal is fantastic!
I wish I could see those, here!
I am hoping to go to see vultures soon... Don't tell anyone, it's a secret!! LOL!
Cheers, Chris!

Dont have that teal on our list yet..will have to seek them out next time we find some green wings.