For many years, I have been concluding my column in the Brattleboro Reformer with the words, “Good birding.” Lately, I have been thinking about what the words mean, and how many different levels there are to good birding. I have also come to realize that good birding has meaning for me that it did not have some years ago. 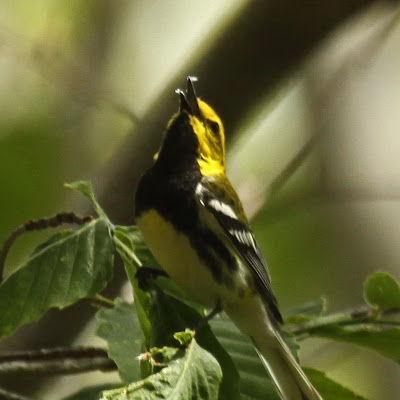 Among some of the most avid birders, good birding means a long list - a day list, year list, or life list of birds identified. If you can identify it by sight or sound, you can list it, and hurry on to find something new. This means that if a bird bursts from the forest floor and disappears, you can tick off Ruffed Grouse. If you hear “zee zee zoo zee” from the top of a tree, you can tick off Black-throated Green Warbler. You may just glimpse a bright red movement in the leaves but it is enough to tick Scarlet Tanager. You may never know where the songster is perched, but you know Wood Thrush and Hermit Thrush when you hear them and can add them to the list. At the end of the day, satisfaction comes from the long list of birds that have been ticked.

The World Series of Birding took place two weeks ago. Highly skilled teams of birders competed to see who could list the most species within the State of New Jersey in one day, from midnight to midnight. The winning team had 228 species, many (perhaps most) identified by song, alarm call, or  flight call. The event provides an annual snap-shot of the birds present in New Jersey in mid-May, and raises hundreds of thousands of dollars for conservation organizations. And, a single day list in excess of two hundred will qualify, among most people, as a day of good birding.

Occasionally I spend a day birding with a friend who has an excellent ear for bird songs and bird calls. He quickly recognizes the song of an uncommon warbler. But he is never quite content just to know what is there. He wants to see it, and not just a glimpse - see it so that the color and markings are clear - so that he can compare it to the illustration in the pages of the tattered field guide he sometimes carries - and enjoy the visual feast. Long minutes are spent staring into tree tops or peering into a tangled thicket searching for the bird, waiting for it to appear among the leaves and then stay still for a few brief moments. This is good birding that is very different from making long lists. This is birding that is satisfied only when the bird is seen, and seen well.

In the last few years, making lists has become less important, and watching birds has become more important. Early this week I wandered the roads on Stratton Hill in Marlboro and Newfane. I heard all of the usual birds and saw most of them. But the best experience was in an open grove of pine trees. I saw a small brown bird fly from one tree to another, then to a dead pine where it creeped its way up the trunk and disappeared beneath loose bark about sixty feet above the forest floor. Then it creeped out the top of the bark, creeped upward on the trunk, and finally flew off. 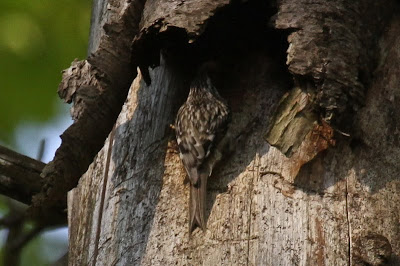 The Brown Creeper is the forest waif; it lives in our woods year round, begins singing in early Spring, and is well into the task of raising of young when most birds are just getting started. The twenty minutes I spent watching the creepers defined good birding for that morning in the woods.

Over the last few years, I have added photography to my birding. The camera has contributed significantly to my rethinking of what good birding means. For example, when I make my annual Spring trip to Cape May, there are two southern warblers which are targets. This year I saw both of them. I heard the Yellow-throated Warbler singing from the top of pine trees. I had a very clear look at the bright yellow throat and bold black and white pattern of the wings and back. The look was brief - seconds at best - but much better than in some previous years. There was no opportunity for a photographic attempt. 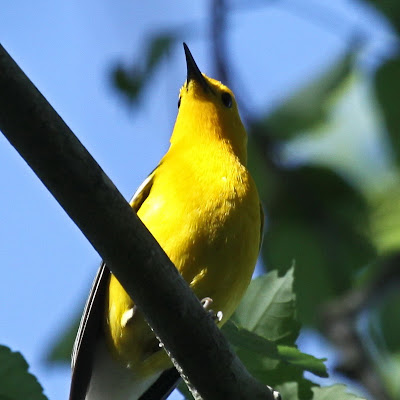 In a beaver swamp in the late afternoon, I heard the sweet notes of the Prothonotary Warbler. Kaufman calls this warbler the “golden sprite of swampy woods.” I did some pishing, and in moments the bird was investigating me, examining my intrusion from an open branch not twenty feet from where I stood. When I put the camera on him, his golden head and breast filled the viewfinder. The camera clicked away. A day of good birding had gotten better by several degrees.

Shorebirding often means peering through a scope, looking for slight differences in the similar looking birds which will give away the presence of something unusual. I still do this type of shorebirding. But with photography as an interest, I now find myself sitting on the sand, waiting for the Sanderling or Piping Plover to run into the ebbing water so that I can capture it in mid-stride. 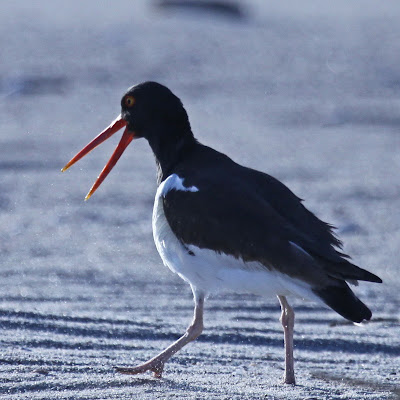 Or, I find myself waiting for the next clownish act in the oystercatcher’s courtship. This stocky shorebird stays on the beaches and tidal flats. It looks like a clown, and when breeding season is getting underway, the antics it uses to impress a mate turn looks-like-a-clown into reality. That’s good birding.

Early this week I roamed the roads and trails in the old Green Mountain town of Somerset with a friend. Broad-winged Hawks called in at least three different locations, protesting our brief passage through their nesting neighborhood. From snags and tangles in large meadow-like clearings, Lincoln Sparrows sang their songs. It was the first time in several years that I had encountered this rare Vermont breeding bird. Hawks and sparrows ... and good birding.

But there is no need to wander distant seashores or trek through tangled mountain forests for good birding. One day recently, I watched a robin with more nesting material in her beak than she could easily carry. She waited on a branch for me to move along, so that when she flew to her nest, she would not give away its location. Good birding.

The House Wren sings from dawn to dusk in my yard, as he simultaneously goes about the business of nest building and mate attracting ... except, when I walk through the yard in hopes of watching him as he toils away. When I enter his domain, he falls silent, wary about my intrusion. When I walk back to the porch where I belong, he sings. Good birding. 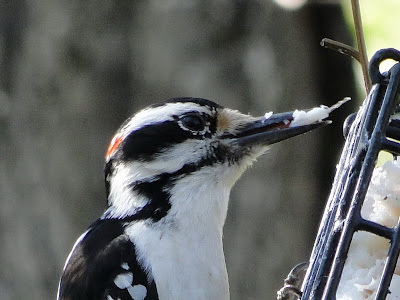 When the robin rattles in the fading light, and the Veery sings his vesper song, then the day has ended with good birding.

Good Birding post, Chris! I loved the photos, and your Prothonotary is a beauty. Cape May is one of my favorite places to go birding.

Great post and a very nice start to my Saturday.

Chris, a great list of what makes up the many pleasures of birding. Nice pics too!

What a wonderful and intriguing post! Like your friend, I have found myself with new standards for birding - standards I suspect make no real sense. Now I don't even count birds unless I have photographed them - and they must be pretty good photos, too. How did I stray so far from binoculars in such a short time?

Chris, I can't agree with you more about taking the time rather than rushing to the next spot. I learned in college in Northern VT to sit and wait for wildlife to come to you. Nothing more relaxing and worthwhile in life. Thanks for your great post and your insightful comments.