Thomas Jefferson, our third president, was a republican (small “r”) who believed in limited government and a strict reading of the Constitution. If the Constitution did not explicitly allow the federal government to do something, it could not do it.

But then Napoleon of France stole New Orleans and all of the attendant Louisiana territory from Spain. The Emperor soon discovered it was more trouble than it was worth and asked Jefferson (via diplomats) if the United States would like to buy it for $15 million. The dollar was still worth something back in 1803, but even so, the offer was a real estate bargain. With nary a glance at his Constitutional scruples, Jefferson said yes, and with the stroke of a pen, $3 million in gold downpayment, and $12 million in bonds (government debt), the United States doubled its recognized territory. (Legal territory was then determined by European governments and bore no relationship to the people who had lived in a place long before the Europeans showed up to claim it as their own.)

Jefferson had no idea what the United States had bought; neither did France know what it had sold. Within weeks of the purchase, Jefferson had Congress appropriate $2500 for an expedition to find out. He commissioned the “Corps of Discovery” as a scientific and military expedition to explore the newly acquired Louisiana Purchase. The expedition was “to explore the Missouri River  and such principal stream of it as by its course and communication with the waters of the Pacific Ocean whether the Columbia, Oregon, Colorado or any other river that may offer the most direct and practicable water communication across this continent for the purpose of commerce.” He further directed the expedition to learn more about the Northwest's natural resources, inhabitants and possibilities for settlement. They were also to watch out for potential interference of British and French Canadian hunters and trappers who were already well established in the area.

The task of exploration was given to Jefferson’s old friend, Captain Meriwether Lewis. Lewis in turned named William Clark as co-leader. Army bureaucracy, being what it has always been, did not promote Clark from his 2nd Lieutenant rank, but the men all knew him as “Captain.”

In May, 1804, Captains Lewis and Clark set out with a party of thirty-three men. Their journey up the Missouri River, on to the Pacific Ocean and back lasted 28 months. The expedition documented over 100 species of animals and approximately 176 plants. Specimens were collected, described, and catalogued and brought home to the ever-curious Jefferson. The expedition even sent a caged prairie dog, which had never been seen before in the East, to the President. It was a stunning scientific expedition. Indeed, it was successful in every way.

Naturally, birds were among the animals described for the first time to the curious residents back east. In fact, the only species they described which commemorate their expedition and leadership are birds: Lewis’ Woodpecker and Clark’s Nutcracker.

Meriwether Lewis has a step up on me (in myriad ways I am sure); my life list does not include his woodpecker. Hopefully someday I can come back and write about his woodpecker.

But my life list does include the nutcracker named for William Clark. He “discovered” the bird in Idaho in 1805. Clark noted its bounding, jerking flight, and referred to it as “a new species of woodpecker.” Many observers since Clark have reported this first impression of Clark's bird. Given everything Clark was doing, and did, we can forgive him this mis-reporting.

Clark's Nutcracker is, in fact, a Corvid related to crows, jays, and magpies. During my recent travels in the Canadian Rockies, I watched many of these handsome gray-white-black birds. They exhibited the Corvid personality: noisy, curious, and opportunistic. 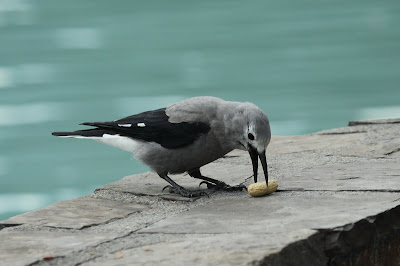 Throughout the Canadian parks signs remind visitors not to feed the animals. Sometimes those signs would showed the profile of a particular “wildlife” that was not to be fed. In several places, it was the profile of a raven. Around Lake Louise, I think the signs depicted a nutcracker. We walked a popular tourist path along Lake Louise. At the end of the walk, I sat on a bench and enjoyed the view. A family was sitting in the same area. In the middle of the area was a spruce, and from a branch just above my head, a Clark’s Nutcracker called loudly: “kraaa, kraaa, kraaa.” The young girl was eating peanuts. She dropped one. The nutcracker swooped down, grabbed the peanut, and was gone.

Less than a minute later, the bird was back: “kraaa, kraaa, kraaa.” The girl held a peanut in her fingers and stretched her arm. The nutcracker made a grab for the peanut. Surprised, the girl dropped it. The bird dashed in, grabbed the peanut and flew. In moments, it was back again, having again cached the peanut for later consumption. 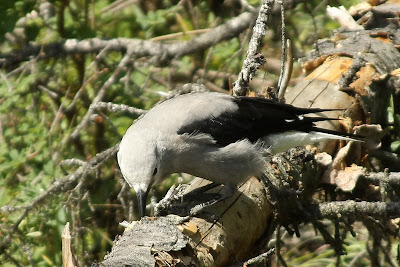 Like the other Corvids, Clark’s Nutcracker is omnivorous. It will eat whatever is at hand. It favors pinyon nuts, which it does not crack. It pecks and pries the meat out of pine cones, tears bark off of rotting limbs in search of insects, snatches young birds out of nests, forages ants, beetles and snails on the ground, and stores food for later use, sometimes successfully “finding” its storehouse beneath many inches of snow.

I saw three young nutcrackers with a pinkish tinge to their breasts. I have not been able to find anything suggesting that this is a juvenile plumage, so I surmise that the pink tinge came from the diet they were fed, perhaps berries.

Clark’s Nutcracker shares with the Gray Jay the folk name, Camp Robber: “especially in winter when other food is scarce, it comes freely to the camps to pick up whatever scraps of food it can find, and almost anything edible is welcome; at such times it becomes quite bold, frequenting the open-air kitchen and even occasionally entering the tent or cabin. It invades the vicinity of farms and houses, looking for kitchen hand-outs or picking up crumbs of bread or waste grain in the streets.” (Bent)

William Clark first saw the nutcracker along a tributary near the Columbia River; its species name commemorates this location: columbiana. Establishing its Genus took longer. Its old generic name was picicorvus, suggesting its similarity to woodpeckers and crows. It has also been classified with the crows in the genus, Corvus. It is now firmly Nucifraga, “nutcracker,” a relationship which it shares with the Spotted Nutcracker of Eurasia.

The Lewis and Clark Expedition was a remarkable undertaking led by a pair of remarkable men, and made possible by a politician who could compromise his principles. Their achievement has been honored in the common names of two birds. In the case of William Clark, Clark’s Nutcracker is exceptionally appropriate; the bird is bold, daring, resourceful, and adventurous, qualities which Captain Clark exhibited in abundance.

Extremely interesting write up and history lesson. so much to learn when you discover the writings of Lewis and Clark. Thanks for posting. Although the Clark's Nutcracker is loud, often obnoxious and opportunistic, i find it charming. :)

Here is Idaho we enjoy the history of Lewis and Clark tied to many things. Come to Idaho in May and I'll find you lots of both species! The Western Tanager was also discovered in Idaho by Lewis and Clark.

I met my first Clark's Nutcrackers this summer down at Crater Lake. I love how crazy they sound!