“There are two birds up there,” said the hawk watcher.

The visitor stared at the sky in the direction the hawk watcher was looking. “Oh yes, I see them.” The smaller bird dove toward the larger one, both swirled rapidly, each seeming to attack the other in rapid succession.

“How in the world can you tell?” asked the visitor.

“The males are smaller than the females. He’s weighs about as much as a quarter pounder. She’s almost twice as big.”

“Okay, but how do you even know they’re sharpies?”

“When we see one hawk attack another hawk, it is almost always a sharpie. We look for other clues, like a small head and a long thin tail. But sharpies have an attitude; they’ll go after anything. We’ve even seen them harass an eagle. That’s what sharpies often do.”

A conversation of this sort is repeated several times on the Putney ridge during the hawk watch season. One of the best clues these hawk watchers use to identify a small, distant hawk, is the “attitude” which compels harassment of another hawk.

Harassment of one bird by another bird is usually a defensive technique. Blue Jays are especially noted for the way they will mob a hawk. In late August, I watched as jays screamed their displeasure and made continuous mock attacks on a young Sharp-shinned Hawk. The hawk in turn made ineffectual attempts to chase the jays. Blue jays are frequent targets of the accipiters and there is good reason for their alarm when a hawk is in the neighborhood.

I have watched the Eastern Kingbird attack anything which intruded on its nesting territory, regardless of size. I watched a small mixed flock of woodpeckers and song birds go after a Barred Owl on a wintry morning. Crows are often seen along an interstate harassing a Red-tailed Hawk which wants to do nothing but stay perched until it sees a mouse moving in the grass. And I’ll never forget seeing a Red-winged Blackbird pecking on the back of a hapless Turkey Vulture as it laboriously tried to get airborne on a cool morning.

Protection of nesting territory and proactive protection against a potential predator accounts for most of this behavior. But I must admit that I am at a loss to explain the feistiness of the Sharp-shinned Hawk, especially since so many are young hatch year birds. Is there genetic encoding which is protecting against territorial intrusion. Is there an attempt to take prey on the wing? Or is there a preemptive attack to prevent becoming prey? Sharp-shins are small hawks, and they are preyed upon by larger hawks, even their cousin, the Cooper’s Hawk.

A few years ago, I read a daily report from a hawk watch site in southeastern Michigan. It was a slow day for the hawks. The hawk watchers were happy when a Sharp-shinned Hawk was sighted. As it worked its way southward, it was duly counted. Then a Peregrine Falcon suddenly dove on the sharpie, grabbed it in mid-air, and began to feed as it continued to fly. The sharpie was taken off the count list; the Peregrine was added.


Sharp-shinned Hawks are not the only raptors with attitude. Pete Dunne (in Hawks in Flight) describes the sharpie as feisty, but when writing about the Merlin he uses adjectives like aggressive, pugnacious, and intolerant. The Merlin is a falcon only slightly larger than the kestrel. But where the kestrel is a waif on the wind, the Merlin is compact, powerful, and fast.

Dunne writes of the Merlin: “They will go out of their way to harass a bird that crosses into their territory or occupies their airspace. Since Merlins seem just as easily provoked during migration as at any other time of year, a Merlin’s territory may be inferred to be wherever it happens to find itself.” He continues on their attitude: “Merlins are usually solitary (because they have a bad disposition) and will frequently go out of their way to harass other birds in migration .... At Cape May, high-flying Merlins are usually detected because they are harassing another raptor.”

The Northen Harrier is a rather benign raptor. It sweeps and glides above a field or a marsh, a gentle and harmless raptor except to the mice it is hunting. It doesn’t bother others. But that doesn’t spare it from harassment.

Early this week I watched a young harrier passing over the hawk watch site at Lighthouse Point where the Connecticut River enters Long Island Sound. The harrier’s presence provoked the ire of a young female Cooper’s Hawk. She dove at the young harrier. 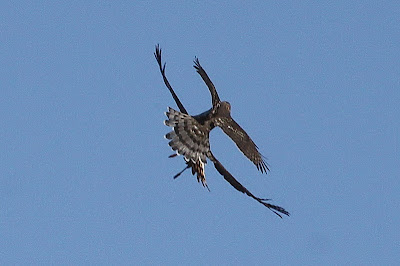 The match-up was like putting a lanky wide receiver with no speed whatsoever, against a beefy linebacker. The harrier has the longer wing span, but gram for gram the two birds weigh about the same. She dove at him, attacking him from the rear with her talons down. Then she did it again, and again. The poor harrier youngster flew from her wrath as quickly as he could, which is not very quickly. As speedsters go, the harrier is a tortoise.
Was the Cooper’s overly optimistic, thinking she could somehow snatch the harrier and have a generous meal? Or did she simply have an attitude, taking offense at the harrier’s presence in her presence and driving him from her airspace? Whatever the reason, it happened less than a hundred feet above my head.
Attitude. It’s not very pleasant when you have to deal with another person who has it. But when watching hawks, it makes for some great hawk watching.

Wonderful post. Very informative and well written. I thoroughly enjoyed this, Chris. Thanks!

Thank you, Chris. Not only do I appreciate your wonderful images, I always learn from and enjoy reading your posts.

Great post, very informative and well written, so glad I found your blog!

I have both the coopers and sharpies around here but none lately. My resident bird population is down too. I think it has to do with the hot and dry summer we've had.

I enjoyed your photos.

A truly magnificent picture report!
Very impressive to be a witness to such scenes!
Enjoy your WE!!

Gorgeous post Chris. Very nice indeed to witness attitude and be able to catch pictures of them!

Wow what a great combo of photos and info! I do enjoy the watching birds with attitude!

Super arial combat and Merlin shots! Wow, I'm envious. That must have really ticked you off about the butt shot on the Eastern!