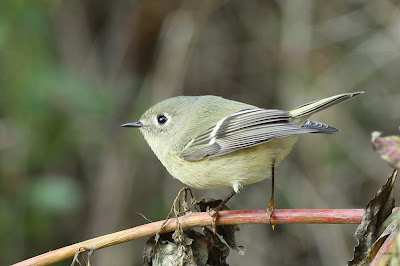 I have seen the kinglet cousins on many different occasions. Mr. Ruby-crowned appears in mid-April, a tiny, curious bundle of energy who may pause anywhere to fuel up as he journeys to the boreal forests to breed. On his journey south in the Fall, his hormones have quieted, and he is more leisurely in his travels. Eventually he will find his way to the deep south, where winter hardly deserves the name. 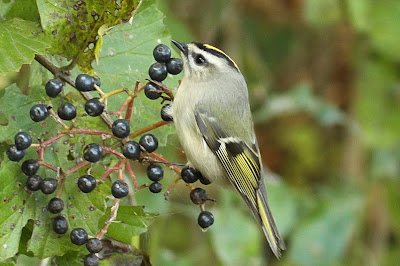 Mr. Golden-crowned is smaller than his cousin, and hardier. He may head to the warmer southeastern states for the winter. He is just as likely to stay put, spending the winter in the boreal forests of the far north, or the coniferous forests of New England and the mountain ridges of the East. On a hardiness scale, Mr. Golden-Crowned rates a perfect 10, more the remarkable since he is the smallest perching songbird in the world. We may see him on the worst winter days working through the pine trees. Or more likely, we will hear his thin buzzy call and see something flitting among the needles. He is not a bird that sits still while a bird watcher fumbles to get his binoculars in focus. 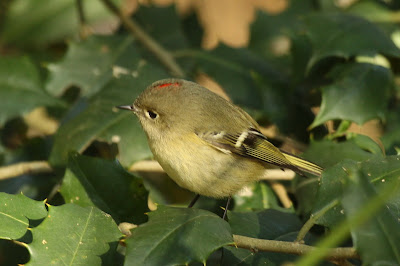 On the other hand, Mr. Ruby-crowned is easier to see primarily because he likes the bushes and understory, where his cousin, Mr. Golden-crowned, prefers the mid-branches and canopy. Both kinglet cousins exhibit a restless energy that makes a two-year old toddler appear just shy of comatose. They are never still for long.

You need to be a patient birdwatcher in order to get a good look at either of these birds. They are tiny and almost constantly on the move. And, if they are difficult for the birdwatcher with binoculars, they are a real challenge for the photographer. When I was in the mountains of the Gaspe Peninsula this past June, I was in Mr. Golden-crown’s nesting neighborhood. He was quite provoked that I dared walk a trail in his territory, but he did most of his protesting while half hidden. He gave me only fleeting photo opportunities, and most of those were a blur.

But ... I was in Cape May two weeks ago when there was an epic fall out of migratory songbirds that left the most veteran birders in a daze. I don’t know how the kinglet numbers that were present compare with a “normal” year, but I do know that I had more close encounters with the two cousins in one day than I have had over the course of several years. 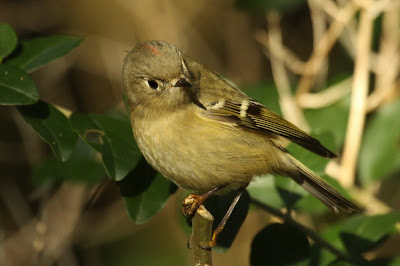 I stood in one spot during the mid-morning for over half an hour, watching and photographing both kinglets. I took lots of pictures of leaves and branches and caught blurry images of a bird that flew just as I clicked. I also had times when one of the cousins was so close that I could not focus with my long lens. There were so many opportunities that the law of averages and chance eventually tipped in my favor and yielded clear, sharp photographs.

The scientific and common names of both kinglets are consistent. Both are “little kings” who wear a crown. Mr. Golden-crowned is Regulus satrapa - “little king” and “ruler.” Mr. Ruby-crowned is Regulus calendula, “little king” and “glowing,” referring to the ruby crown. Both birds are named for their “kingly” appearance, not for their unusually tyrannical behavior. Parenthetically and by way of contrast, the behavior of our Eastern Kingbird is captured in his family, genus, and species name, all of which are “tyrant.” Also parenthetically, Europe has two additional cousins (Genus Regulus), the Goldcrest and Firecrest, both of which look very much like our Golden-crowned Kinglet. 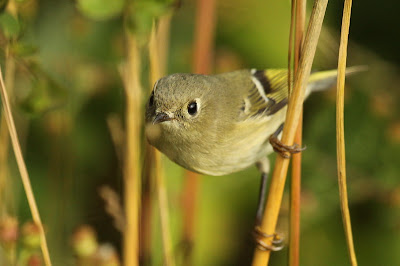 Mr. Ruby-crowned Kinglet is something of an anomaly. Most of the time when I see him, he is a non-descript, midget. He is olive-drab, with wingbars and a white eye-ring. There is no obvious crown. In a fleeting look, he might easily be mistaken for a flycatcher. On the West Coast, Hutton’s Vireo is almost identical except for its vireo beak. Mr. Ruby-crowned might even be mistaken for a wren. One of his names is Ruby-crested Wren; his nervous activity and pugnacious attitude is very wren-like.

Most of the time, Mr. Ruby-crown’s ruby crown is concealed. I have had glimpses of the ruby crown during his spring migration when he has been agitated over my intrusion into his territory or when he has been rehearsing his repertoire for mate attraction. On fewer occasions when my viewing angle was just right, I have seen a hint of his crown.

To my surprise and delight, on many occasions when I was watching Mr. Ruby-crown in Cape May, his red crown was visible and obvious. Maybe it was because he was feeding so low in the bushes, sometimes even on the ground at my feet. I was looking down on him, down on the top of his head. The red streak of his crown was clearly visible. 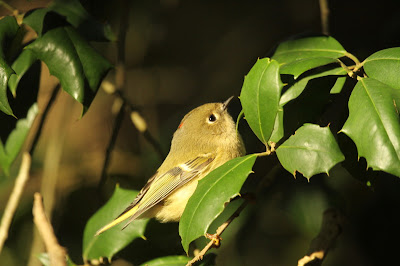 As diminutive as the Ruby-crown Kinglet is, he has one characteristic that is oversized. Here is the description given by the ornithologist, Elliot Coues: “One of the most remarkable things about the Ruby-crown is its extraordinary powers of song. It is really surprising that such a tiny creature should be capable of the strong and sustained notes it utters when in full song. The lower larynx, the sound-producing organ, is not much bigger than a good-sized pin’s head, and the muscles that move it are almost microscopic shreds of flesh. If the strength of the human voice were in the same proportion to the size of the larynx, we could converse with ease at a distance of a mile or more. The Kinglet’s exquisite vocalization defies description; we can only speak, in general terms, of the power, purity and volume of the notes, the faultless modulation and long continuance.”

Alas, we will have to wait until next April to hear Mr. Ruby-crown’s song. When I watched him in Cape May, there was only a wiry “tsip” as he moved through the bushes in his feeding frenzy. 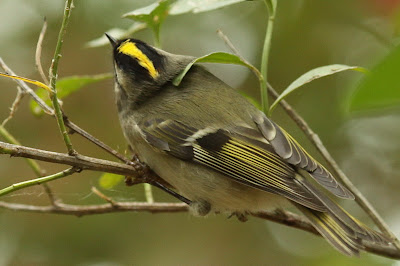 Of the two kinglet cousins, I must admit that I am most drawn to the Golden-crowned. Please keep coming back. Very soon I will atone for slighting Mr. Golden-crowned in this column by giving him a column all his own.

Email ThisBlogThis!Share to TwitterShare to FacebookShare to Pinterest
Posted by Chris Petrak at 6:00 AM
Labels: Golden-crowned Kinglet, Ruby-crowned Kinglet

Chris - great post. You really brought the personalities of the cousins to life. I know what you mean about the law of averages in getting decent shots of active birds like these, but your shots are way better than decent!

I am extremely impressed with these photos- especially the Ruby-crowneds where you can actually see ruby! Thanks for the interesting info as always!

That's a beautiful article about the different species Chris and a wonderful collection of shots.... Well done.

Great read and awesome images, I was amazed last year when two GC Kinglets over-wintered in my local park (Barrie, Ontario) Even when it was -30c, they didn't slow down one bit and still gave me fits trying too get sharp images ;-) Have a great weekend.

Informative post and fabulous photos! I have been chasing kinglets with just meagre results. Last month I spotted a Ruby-crowned K as it was moving through brambles along with a flock of chickadees.