The “Winter Finch Forecast” is an annual attempt by Ontario ornithologist, Ron Pittaway, to predict the movement of northern finches based upon the seed crops of their favored trees. With assistance from this forecast, two weeks ago I wrote about the Pine Siskin. The siskin was almost completely absent from our area last winter. It has been reported at bird feeders in modest numbers for the last month. Highly nomadic and opportunistic, as winter approaches they seem to be wandering southward in search of food. 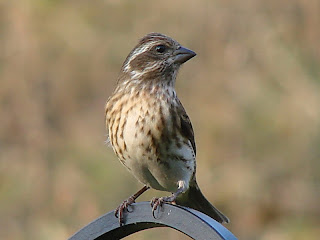 A second subject in the “Winter Finch Forecast” is the Purple Finch: “This finch winters in the north when the majority of deciduous and coniferous seed crops are abundant, which is not the case this year. Most Purple Finches will migrate south of Ontario this fall. A few may frequent feeders in southern Ontario. Purple Finch numbers have declined significantly in recent decades due in part to a decrease of spruce budworm outbreaks since the 1980s.”

Southeastern Vermont is obviously south of Ontario, but our state is also well within the breeding range of this northern finch. The recently completed Vermont Breeding Bird Atlas documented the Purple Finch in 350 survey blocks. Within my own immediate neighborhood, Purple Finches breed, often raising multiple broods. At times during the summer, they are the most common species at my feeders as adults feed their young offspring.


The Purple Finch is one of two “red” finches in the East; the other is the House Finch. The House Finch is native to western North America. It was accidentally introduced in New York in 1940 and has become established and widespread in the East. It is slimmer than its cousin. The male House Finch is not as dark red as the Purple. It has a red eyebrow and forehead. The female is a dull, streaked brown bird.

The Purple Finch is chunkier of the red finches and has a shorter tail. In fresh breeding plumage, the male is a deep wine red; his head is more uniformly red. The female Purple Finch is a dull, streaked brown bird, but with a strong face pattern and white eyebrow.

The House Finch is more likely to be found in towns, cities, and open areas. The Purple Finch prefers forest.

It may be difficult for us in New England to think of the Purple Finch as a “winter finch,”
given that it breeds commonly in our forests, and most leave for the winter. While I have seen the Purple Finch every month of the year, through the winter months it is uncommon.

John James Audubon gathered much of his information for Birds of America while living in Louisiana. In the deep south, he knew the Purple Finch as a winter finch, wandering in small flocks of six to twenty birds from the beginning of November until April. This is the same period during the year when the Purple Finch is uncommon in my neighborhood. 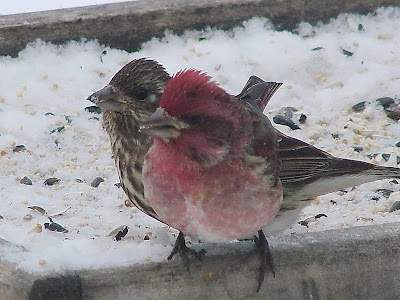 While uncommon during the winter months, the Purple Finch is not unknown. Forbush had this to say about the Purple Finch: “Purple Finches are hardy birds and, if well fed, will live through rather severe winters. They bathe in brooks with the temperature below freezing point and some have been known to sing in the clearing weather directly after a blizzard ... If well fed, some males may be heard singing more or less almost daily in mild seasons during the latter days of February. Purple Finches spend winter nights in dense evergreen trees or thickets, or even in some open building or under the shelter of a cupola roof.”

In addition to the visual delight provided by the male Purple Finch, he also contributes to the audio quality of the neighborhood. If jealously were an avian characteristic, his song would make any warbler jealous, especially since most warblers don’t sing, they buzz. “This favorite bird is one of the most melodious of American finches. He pours out his gushing, ecstatic warble from the top of some tree ... a continuous melody ... this most remarkable vocal effort.” (Forbush) The song “is sweet and continued, and I have enjoyed it much during the spring and summer months, in the mountainous parts of Pennsylvania ...” (Audubon)

When these finches begin returning to my neighborhood in late winter and early spring from wherever they have spent the bleak months, they not only bring their delightful and promising song, they also bring entertainment. Though there is plenty of food in the feeders, each individual regards the sum total of the sunflower seeds as food which is exclusively his or hers.  “Purple finches are more or less gregarious at times, especially in winter; they are sociable and friendly at such times, except when feeding causes rivalry. Then they become selfish and belligerent. When several of them are eating at a feeding station they often seem quite hostile toward any new arrival, raising the feathers of the crown and rushing at him with wide-open bill. Occasional pecking may result, which seems to produce no great damage. The attacked one usually retreats somewhat and proceeds to feed only a few inches from his pursuer.” (Bent, Life History) As I have already observed, the plumage of the male Purple Finch is a deep red wine. It is not purple. Aside from the fact that bird names often make no sense, why is it called “Purple Finch?” To answer that, we need to know its scientific name: Carpodacus purpureus. The genus name comes from Greek and means “fruit eaters,” a questionable name for birds which are seasonal fruit eaters, but year round seed eaters. The species name, purpureus, comes from Latin and means “crimson” or other reddish color. Our word “purple,” meaning a color obtained from mixing red and blue, derives from the Latin, purpureus. The Purple Finch is really a crimson colored finch. Or, translating its scientific name, it is “crimson fruit-eater.” When taxonomists give birds their scientific names and common names, they put aside their science and become impressionistic artists.

And so ... Purple Finches, which are considered to be one of the winter finches, summer in my neighborhood, and leave for the winter. Except for a few ...

Email ThisBlogThis!Share to TwitterShare to FacebookShare to Pinterest
Posted by Chris Petrak at 6:00 AM
Labels: Purple Finch, winter finches

I'm going to follow your site. But I wanted to leave a note first. I'm in N.Ont. Canada and have been featuring purple finches on my blog for the past few weeks. I've had visits from house finches as well. Pine Siskens? Maybe, I've mis-identified the female finches? Take a look will you? Great story and great site. Gary Me, Boomer and The Vermilon River.

Wonderful post on the winter finches. The male Purple Finches are gorgeous birds. And I love the cute Pine Siskins. I hope to see some Pine Siskins in my yard this year.

Thank you Chris, that was very informative and interesting. As far as I know we don't have any Purple ones around here in Europe, but we certainly have Greenfinches. Apart from the usual Great Tits and Blue Tits, the Greenfinches dominate around my feeders. Are the Purple Finches as aggressive as Greenfinches. They always fight each other, sometimes quite spectacular aerial battles, which I have managed to capture quite a few times. They also, in contrast to the tits, have the ability to open the sunflower seeds sitting on the perch, so they just sit there and munch away until they are challenged by one of their own, unless the Nuthatch swoops in of course.