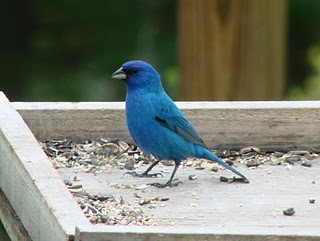 I usually see our summer songster at the top of a tree along a woodland edge, singing his cheerful, finch-like doublet song - a dark spot on the tip of a branch. On and on he sings, proclaiming his rule, serenading his mate, or perhaps caroling just for the sheer joy of it.

She is no where to be found. She is on her tightly woven little nest in a bush near the ground. She is incubating, and when her eggs hatch, she will feed the young. Eventually he will come down from his high perch and assist with the young. On a couple of occasions I have happened upon these busy parents as they are tending their fledglings. He has little time to sing then, so maybe that’s why he sings with such persistence when he is able - as long as a half hour from the same perch before he flies across the road to a new perch atop a different tree where he reprises his aria.

He is the Indigo Bunting. Silhouetted against the sky, he looks black. But when he comes to the ground to feed, forage, court, or chase a rival, he is blue. No - to call the Indigo Bunting blue is to do him a disservice. He is “indigo blue” - rich and sparkling blue, like the treasured blue dye of the plant genus Indigofera which the classical Greeks and Romans imported from far distant India (hence the “indigo.”)

When he comes down from the tree top so that a closer look is possible, he is stunning. Breathtaking. So indigo blue! - except for his gray beak, and a dark tinge on his wing and tail feathers, or possibly some traces on brown.

Through most of the breeding season, it is rare to get leisurely looks at the Indigo Bunting, but during migration, if you are lucky - maybe. When spring is in full flower, or in August when breeding is complete, the Indigo Bunting may visit backyard feeders. Usually those visits are brief, and he is wary and skittish. But not always. And for me, not this year.

This year I did not have one Indigo Bunting - I had three. The first arrived on a Sunday morning, to be joined by two more the next day. For ten days they were regular visitors to my yard, taking seed from the feeder and the platform, scratching through the grass, perching briefly atop the plant hanger or quince. One morning through my bedroom window, I watched the three males feeding among the crab apple blossoms, spots of deep indigo-blue animating the profuse pink branches.

Occasionally as I walked through the yard, I would hear an Indigo Bunting sing, but it was just a warm up song. They were not quite ready to begin the breeding season in earnest. At least, I assume that is why the two or three males were able to feed together with only brief hints of hormonal rivalry and why the songs were still brief ones rather than the extended arias heard in mid-June.

Opportunity for rivalry was certainly present. At least two female Indigo Buntings enjoyed my bird feeder largess along with the three males, but there was none of the wild antics among the males or between the sexes usually associated with pairing and mating. That would come soon - the task for which they had come north.

The Indigo Bunting is a tropical bird. Passerina cyanea (from Latin, pertaining to a sparrow, and dark blue) was once classified in the finch family - seed eating birds generally characterized by large bills.

More recent studies have refined the classification and it is now a member of the family, Cardinalidae. Other New England species in this family are the Northern Cardinal and the Rose-breasted Grosbeak.

An aside is in order: never assume that there is a relationship among birds which share name elements. For example, the Painted Bunting (a southern breeder which occasionally strays north to New England) shares Family and Genus with the Indigo Bunting. But the Snow Bunting (a winter visitor) shares neither; it is a sparrow family member.

Common names, so it seems to me, reflect the observations of common people. Hence, a very large beak might result in a common name containing “grosbeak” - big beak, even though the scientists later determine that relationships among various “grosbeaks” is distant. 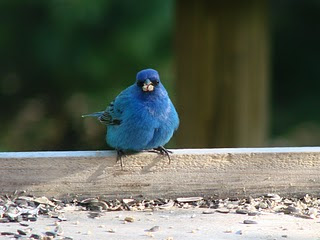 In the case of the Indigo Bunting, the “indigo” part of the name is obvious. The bird is a dramatic “indigo blue.” For the “bunting” part of the name, we need to dig deeper. It has nothing to do with flags or decorations. “Bunting,” as applied to birds, comes from a Middle English word that meant “a plump or thickset person or creature.” The first recorded use of the word, bunting, for a bird is found in the early fourteenth century and applied to the plump Corn Bunting of Europe (this according to Lockwood in The Oxford Dictionary of British Bird Names, 1993.)

When I stumbled upon this bit of derivation trivia, it was revelatory. I have always thought of the Indigo Bunting as a neat and compact little bird. However, during their recent stay in my backyard,  I took batches of photographs through my kitchen window. Many of those pictures show a decidedly plump bird on my feeder platform. The Indigo Bunting is a plump bunting - a redundancy, as you and I now know. 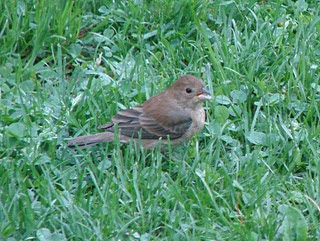 For all of the beauty of the male Indigo Bunting, his mate is as plain as can be. She is a dull, drab, brown little bird with just the slightest tint of blue among the wing feathers. You can only see that touch of blue on her when she is close up, and almost none of the bird guides show that blue in their illustrations or refer to it in their descriptions. Her inconspicuousness goes with her breeding role; she is almost a single parent in the raising of her young.

Audubon knew the Indigo Bunting as an abundant breeder east of the Mississippi, and in some areas it may still be one of the most abundant songbirds. It does not particularly like urban areas or places of intense agriculture, but in brushy rural areas it does well. It prospers is in spite of the fact that it is often parasitized by cowbirds. Thirty years ago I saw my first male Indigo Bunting in northern Michigan; he was busily feeding a fledgling half again as big as he was - a cowbird.

The Indigo Bunting is one of the joys of our temperate summers. Forbush captured the joy which this tiny bird brings to our summer landscape: “The male seems to delight in singing during the hottest part of the summer day, when other birds are resting in the shade. He will sing his way from the bottom of a tree to the top, going up branch by branch until he has reached the topmost spire, and there, fully exposed to the blazing sun, he will sing and sing and sing.”

Email ThisBlogThis!Share to TwitterShare to FacebookShare to Pinterest
Posted by Chris Petrak at 6:00 AM
Labels: indigo bunting

Wonderful post on the Indigo Bunting, Chris. They are a beautiful color of blue. I've been seeing them in my yard too.

Hi Chris. For a 'plump' bird he is absolutely stunning. What a wonderful experience to enjoy this species at much closer quarters than is usually possible.

Informative post. Photos excellent. I have never seen an indigo bunting. I live in a woodland brushy area so maybe if I watch I will see one -- barbara

I just love your blog! I wish more Vermont papers would pick up your column. Only had occasional glimpses of the indigo bunting up here in central Vermont but am always hoping for more. On this cool rainy day, I will just gaze at your pics.