A Winter for Owls

If you have never seen a Snowy Owl, this is the winter to do so in the Northeast. Snowy Owls have irrupted into New England, and been commonly reported in the mid-Atlantic states. At least one even wandered as far south as Jacksonville, Florida. I have seen reports of seven Snowy Owls sighted in the Champlain Valley in one day, and eight on Plum Island near Newburyport, Massachusetts. To find out where the owls are being seen check the “Vermont & New England” links.

That’s the months-old news alert. Even the general media has picked up on the unusually large number of Snowy Owls in New England this winter. What really got their attention was the Snowy Owl that was seen looking out of a building window (!) in Portland, Maine. Yes, somehow she got inside the building, possibly in the course of seeking out the building’s roosting pigeons. She was rescued from the building, found to be in good health and with no injuries, and released.

The Snowy Owl is a circumpolar arctic bird. It breeds in open terrain north of the tree line and to the very edge of the polar seas. It is a big owl, with a length of 23" and a wingspan of 52." Only the Great Gray Owl exceeds the Snowy Owl in length (27").


The Snowy Owl is by far the heaviest owl. It weighs on average 4 pounds, as compared to the Great Horned Owl which averages 3.1 pounds, and the Great Gray Owl which averages 2.7 pounds. For comparison, the most common owl in our New England woods is the Barred Owl: length = 21", wingspan = 42", weight = 1.6 pounds.

Like most birds, their food habits are governed by opportunity. They take mammals (small rodents to large hares), birds (song birds to small geese), and occasionally fish or other aquatic animals.

In the arctic, their preferred prey is lemmings. They may consume over 1600 lemmings in one year. Lemmings are small rodents, 3-6" long and weighing 1 to 4 ounces. They are active all year, which means that they are a food source for the Snowy Owl all year. Like many other rodents, they can reproduce rapidly, so rapidly that their population in a particular area outstrips the resources causing them to disperse and their numbers to crash. When lemming populations crash, the Snowy Owl has to look elsewhere for food. 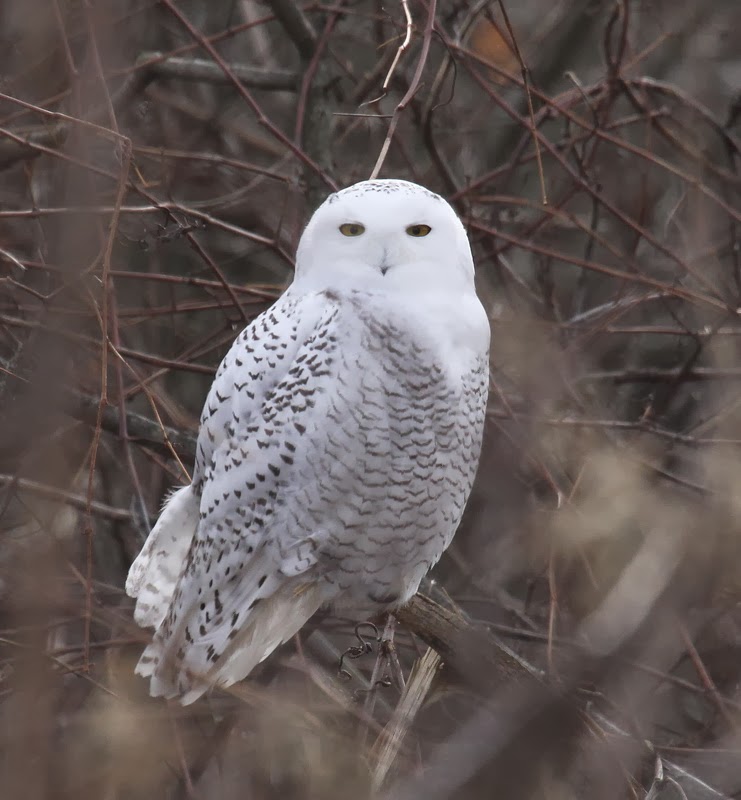 Snowy Owls move throughout the arctic depending upon the availability of food. In our temperate forests, birds of prey return to the same locality, often the same nest, to breed every year. Snowy Owls have also been documented using the same nest year after year. On the other hand,  territorial fidelity is quickly abandoned if food resources are not available.

Snowy Owls are not unexpected in New England during the winter. Almost every year there are a few reported along the New England coast. In December, 2011, one spent several days in the Brattleboro Area, delighting the local birders and thrilling many others fortunate enough to be in the right spot at the right time.

This year the number of Snowy Owls has been way more than usual. As you may gather from what was written above, food in the arctic was scarce, and the birds went in search of places where the pickings are better. The frozen tidal flats and farm lands of New England beckoned. We may be shivering in the sub-zero temperatures, but our harsh winter is no big deal to the Snowy Owl. It can handle it; this winter is just like home for this white owl.


A second owl has also made a Vermont appearance this winter. A Northern Hawk Owl has been wintering just north of Waterbury Center. A circumpolar species of the boreal forest, it makes rare and irregular visits to the northern states. What makes the Northern Hawk Owl a good bird to “chase” is that it is diurnal, actively hunting during the day. When not hunting it perches prominently on the top of tall trees. It stays in the same area, and it attracts birders from many miles away.

When I chased the Waterbury owl a few weeks ago, I spoke with another birder. He was local, and was out nearly every day looking for, and photographing, the bird. He told me where it liked to perch, and which fields it liked to hunt. There were a dozen other people looking for the bird as well. Lots of eyes and lots of help. When the bird perched at a distance, good spotting scopes were readily shared with those who had only binoculars, a common occurrence when a rare bird is found.

The Northern Hawk Owl is a medium-sized owl: Length = 16", wingspan = 28", weight = 11 oz. With a long tail and short wings, this owl resembles an accipiter (Sharp-shinned or Cooper’s Hawk), hence its name, “hawk owl.” It glides low over the ground at high speed or flaps with powerful, falcon-like strokes. Hawk-like, it often hunts with the “perch and pounce” technique, swooping from its high perch when it spots prey.


Last winter we had many daytime sightings of the Barred Owl. The summer before the rodent population was abundant and these owls had nesting success. With winter came a decline in the rodent numbers and these normally nocturnal owls needed to continue hunting during the day. Many of our neighbors had the opportunity to see the Barred Owl.

This year the rodent population crash occurred in the arctic, and Snowy Owls (along the occasional boreal Northern Hawk-Owl) have hurried to New England. Undetected by our poor senses, the frozen fields harbor food resources waiting to be exploited by these powerful predators from the north.

Email ThisBlogThis!Share to TwitterShare to FacebookShare to Pinterest
Posted by Chris Petrak at 6:00 AM
Labels: Northern Hawk Owl, Snowy Owl