“Snowbirds” Returned with the Snow 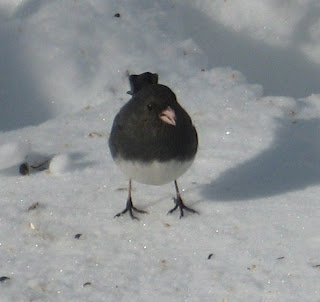 Juncos are everywhere! Throughout the winter, the flock visiting my feeders was about twenty-five. With the return of the snows last week, their numbers have exploded. A hundred or more? Counting is almost impossible, since they are constantly hopping about. They are always skittish, dashing for cover on a whim. Hormones are beginning to flow, and that just adds to their jumpiness as they pause to trill their song from a branch end, then spar with a rival.

And it is not just my yard where they are running up the bird feed bills. Every feeder I pass has dashing flits of juncos, flashing their outer white tail feathers as they head for cover. Someone leaned over to me and said, “My yard is a junco-yard.” I thought - don’t worry - the town ordinance prohibits junk in the yard, not juncos.

All along the roadways, little dark birds are pausing briefly for grit and salt, then heading for bush cover.

Juncos - more specifically, Dark-eyed Juncos. Their Latin name is Junco hyemalis. The origin of Junco is uncertain; hyemalis pertains to winter (Latin). Audubon knew these birds as the Common Snow-bird; “snowbird” is still used in popular parlance. Audubon began his description of his “snow-bird” with words that could still be written almost 200 years later: “This is one of our winter visitants from the north, which, along with many others, makes its appearance in Louisiana about the beginning of November, to remain a few months, and again, when spring returns, fly off, to seek in higher latitudes a place in which to nestle and rear its young. So gentle and tame does it become on the least approach of hard weather, that it forms, as it were, a companion to every child.”

Juncos are a different kind of sparrow in the sense that they are not “little brown birds.” There are two species of juncos in North America. The Yellow-eyed Junco is found only in the isolated mountains of southeastern Arizona. Dark-eyed Juncos are found everywhere else. There are six sub-species of juncos: Oregon, Pink-sided, White-winged, Gray-headed, Red-backed, and Slate-colored. The first five are regional populations. With the exception of the Oregon Junco which is widespread west of the Great Plains, the range of the other four regional sub-species is quite restricted. The Slate-colored sub-species is widespread and in winter may range throughout the lower forty-eight states.

The Slate-colored sub-species of the Dark-eyed Junco is the one which we know at our feeders during the winter. We may occasionally see some juncos with tinges of color along their sides or on their backs, and this sometimes gives rise to reports of “Oregon” juncos. The populations wander and mix and interbreed freely, and that’s why these six different juncos have been lumped into a single species. But the slight color we may see on the occasional junco is pale compared to the true “Oregon” form. Nevertheless, watch for those color traces.

Most juncos head to Canada in the spring where they join with other sparrows (White-throated, White-crowned, Harris’, and American Tree) to breed in mature coniferous forests. Some just head to the higher elevations in the East where coniferous forest or late deciduous successional forest become their nesting homes.

Head to any of the higher elevations in Vermont and you will find juncos breeding. I live at an elevation of about 700 feet. I have not found juncos breeding around my home. When I go up a few hundred feet, I hear them singing their simple one pitch trill. At the right time, I may even find them chasing their fledglings, meeting the demands of the young for food. I have found them singing along Steep Way and feeding young atop Newfane Hill.

Forbush reports hiking up Tuckerman Ridge from Pinkham Notch to the top of Mt. Washington in late summer, 1926: “As we neared the region of stunted spruces and balsam first about Hermit Lake, we were greeted by several small groups of Slate-colored Juncos .... [we] clambered up over the steep headwall trail to the Alpine gardens and across the broken rock of the windswept cone to the summit of New England’s highest mountain. And there, higher even than we could climb, perched on the very ridgepole of the hotel at the tiptop of Mount Washington, was a gray and white midget of a bird, greeting us with its cheery Junco song, the only bird which is regularly found in summer in this barren place.”

Right now, they are singing in the apple tree outside the kitchen, and in the maple, and the spruce, though not with great persistence. This is still the warm-up season. Most are on their way to their breeding territory. 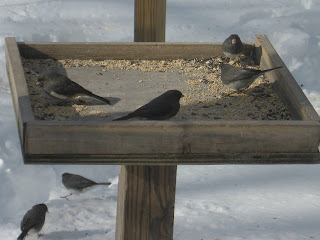 Except ... that the snows returned, and the juncos paused on their journey and are flocking to the easy sources of food provided by our feeders. Most are Gray Snowbirds - “leaden skies above, snow below” (Forbush) - some are Black Snowbirds, as fresh and colorful as a two-toned black-or-gray and white bird can be as it sports its breeding plumage. It may still look and feel like winter in most of our neighborhoods, but watch the males (the darker birds). Their passions are on the rise, and they are beginning to chase each other, tails expanded, displaying the contrast of white and black.

For the most part, however, they are feeding - not just to survive the unseasonably cold April, but also to build up their fat reserves for their continuing migration to the northern forests. Audubon described them as a “hopping” bird when it feeds, performing “its little leaps without the least appearance of moving either its feet or legs.” The junco hops and scratches like sparrows, picking at seeds, shifting nervously - quick, active, and alert. Right now it is a seed eater. It seems like it is only eating my seed, but in fact it is foraging through grasses and along shrubby edges, never far from cover. Come summer, it will add protein to its diet in the form of caterpillars, beetles, ants, and insects.

I wrote most of this column on Monday. In the morning there were 150 juncos around my feeders. In the evening, there were barely 30. By mid-week, the number was only 15. By the time this column appears on Friday, we may have received another big delivery of snow. I wonder if the junco numbers will soar again.

Quotations from Forbush and May, A Natural History of American Birds, 1953. This book is basically an abridgment of Edward Howe Forbush, Birds of Massachusetts and Other New England States, 3 volumes, published in 1929 by Massachusetts Department of Agriculture.

Email ThisBlogThis!Share to TwitterShare to FacebookShare to Pinterest
Posted by Chris Petrak at 7:18 AM
Labels: Dark-eyed Junco, Slate-colored Junco