Why Brown-headed Cowbirds Are Hated 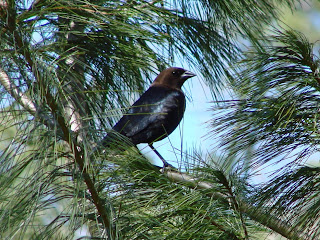 There are three species of cowbirds which appear in North America: Shiny, Bronzed, and Brown-headed. The first two are rare, found only occasionally in southern Florida (Shiny) or along the Texas border (Bronzed). The third, the Brown-headed Cowbird, is common throughout the United States and southern Canada. When birders refer to a cowbird, this is the one they usually mean.

Among most birders, to say that they dislike the cowbird is to understate the case. Distaste edging into hatred is the more likely emotion. I know bird watchers who are gentle pacifists toward all manner of people and circumstances until they encounter the cowbird. Then their pupils contract to pinpoints, their lips become thin, taut lines, and they whisper out curses laden with venom and the craving to administer the fatal dose.

I am not engaging in literary hyperbole when I describe this animus toward the cowbird. A few years ago I attended a conference of the Northeast Hawkwatch Association. One of the presenters described a pair of Cooper’s Hawks which had nested in a public park in the Bronx in New York City. To one of the projected color slides, she matter-of-factly provided this description: “Here’s an early morning photo of the female Cooper’s Hawk breakfasting on a Brown-headed Cowbird.” The audience burst into applause.

Most people consider the cowbird an ugly bird. The female is a dull gray; the male is black with a brown head, with little of the iridescence of the grackles and certainly not the bright red epaulets of the Red-winged Blackbird. A songster it isn’t - squeaky “glug, glug, gleee” seems enough to draw a female’s attention. Cowbirds are free lovers gone amok - completely promiscuous, forming no pair bonds, defending no territory and building no nests.

The opprobrium generated by the Brown-headed Cowbird comes from its breeding practice; it is a brood parasite. The female lays her eggs, one at a time, in the nests of other birds, and then leaves all parenting obligations to the host birds. Hence one of its folk names is Lazy Bird. But the cowbird is also a very successful and adaptable species, so much so that it is threatening the well-being of some of its favorite hosts.

A couple of weeks ago, I was sharing Spring bird notes with a backyard birder in a Brattleboro parking lot. When I said that I tried to chase off the cowbirds which visited my feeders, she countered by reminding me that they were just doing what they had evolved to do. The next day while birding with an ecologist friend, I again got on the subject of cowbirds. Rather than agreeing with the widespread dislike of the cowbird, he argued that their success as a species was due to the cavalier way in which humans have altered natural habitats.

The Brown-headed Cowbird was once limited to the Great Plains, where it followed herds of grazing animals, ground feeding on whatever was stirred up by the hooves. This nomadic feeding life meant that it could not stay in one place long enough to raise young, and so it evolved the practice of parasitizing other species’ nests with its eggs.

When the European settlers cleared the eastern forests and established farms, the cowbird found new open land with forest edge into which it could expand, and new creatures with which to associate. Cows provided the name Cow Blackbird, shortened to cowbird. Its range ballooned. Except for the tundra of the far north and isolated pockets, like mountain tops, the cowbird is everywhere in North America. 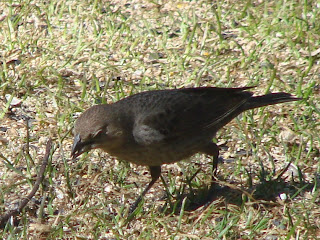 Brown-headed Cowbird eggs have been found in the nests of 220 species. Young have been successfully raised by 144 of those species. The female cowbird has been described as a “passerine chicken,” laying as many as 40 eggs in one breeding season. She prefers nests on the ground or in lower branches, but will deposit her egg anywhere, going to the canopy, or entering tree hollows. Even that most formidable territory and nest defender is occasionally victimized - the Eastern Kingbird.

Only about three percent of the cowbird eggs laid result in an adult bird, but this is enough of a success rate to provide a steady increase in the cowbird population. Some birds simply fail as foster parents. Among birds occurring locally which fail as surrogate cowbird parents are Killdeer, Virginia Rail, Spotted Sandpiper, and Ruby-throated Hummingbird. Other parasitized species learn to recognize and reject cowbird eggs; they may destroy the egg, abandon the nest, or rebuild the nest to cover the egg. The Yellow Warbler has been known to cover a cowbird egg and rebuild its nest repeatedly in its effort to avoid raising a cowbird chick. Host species that have been in contact with cowbirds seem most likely to recognize the intrusive egg.

A cowbird egg may coexist with the eggs of the host species. Usually it hatches a day earlier than the host’s eggs. The nestlings are usually larger and grow faster, so they get more than their share of food and often crowd out the other nestlings. Once fledged, their loud and persistent calling causes them to get more food as well.

Cowbirds are edge species; they seldom venture more than a couple of hundred feet into woodlands. But as roads and powerlines continue to cut pathways through the forests, more edge is created resulting in more breeding habitat for cowbirds. One species which has been severely impacted is the Red-eyed Vireo. Once the most common songster in our woodlands, it has been in serious decline in recent decades. Cowbird parasitism is a significant factor in this decline. Various studies have shown that 40 to 70 percent of Red-eyed Vireo nests are parasitized by cowbirds.

Beneath my dislike of the cowbird is my dislike of the cavalier way in which our environment is used and abused. Given the powerful political and financial clout of the environmental abusers, I sometimes feel that the opposition to the abusers is about as effective in preventing environmental abuse as my chasing cowbirds away from my feeder is in preventing cowbird parasitism. But let’s keep at anyway. Harassing the environmental parasites - hopefully more effectively than we have in the past - is more important than harassing the cowbird parasites. And it is essential if our children and grandchildren are going to have the opportunity for Good Birding.

Email ThisBlogThis!Share to TwitterShare to FacebookShare to Pinterest
Posted by Chris Petrak at 5:54 PM