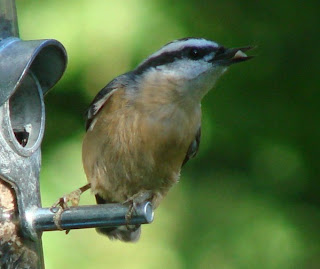 Just when I think I have gotten a bird nicely figured out, I see one of its kind do something completely out of character. This time, it was the nuthatches, and specifically, the Red-breasted Nuthatch.

Nuthatches are stubby, stocky little birds with short tails; they have strong legs and feet, and long toes with sharp claws. These are all adaptations for life on a tree trunk, a niche they share with woodpeckers and the Brown Creeper. Their body style bears a superficial resemblance to these other arboreal species, but that is as close as their relationship comes - superficial. Nuthatches parted evolutionary company with the woodpeckers long ago. The somewhat similar traits in a similar habitat are the result of what scientists call “convergence.”

The woodpeckers and the creeper, supported by their stiff tail feathers, climb up a tree trunk. The nuthatches also climb up the tree trunk, but they are just as likely to climb down the tree trunk head first. The tree trunk, and the tree branches, are where the nuthatches earn their living. They forage for insects and assorted invertebrates in the bark crevices. Their short tail enables them to move as easily down as they do up. By contrast, the longer tail of the woodpeckers would get in their way if they tried to move downward.

Science has not been able to figure out why nuthatches climb down a tree. Research seems to suggest that it is more efficient to forage in the manner of the woodpeckers and creepers - fly to a low spot on the trunk and then move upward. Perhaps the nuthatches are able to see prey when they are moving down that the upward feeders miss.

The natural habitat of the nuthatches is mature forest. The White-breasted Nuthatch will make its home in the broken “forest” between river and farm field, or in a town or village, providing the “forest” has large trees. The Red-breasted Nuthatch prefers mature coniferous forests. With suitable habitat nearby, these nuthatches will often forage for seeds at bird feeders where sunflower seeds are their preferred choice. 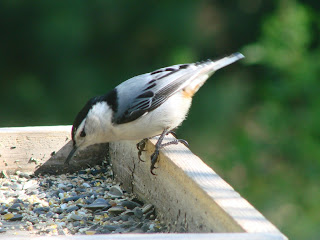 Bent’s Life History calls the White-breasted Nuthatch droll, earnest, sedate, and lacking in a sense of humor. Adjectives applied to the Red-breasted include happy, jolly, quick and agile. I rather prefer “acrobatic clown” for the White-breasted; it perches on the feeder, upside down, with head extended at a right angle from its body, daring any chiropractor to set its spine straight. The smaller Red-breasted may be jolly, but it is also feisty, sometimes aggressive toward larger birds. “Irrepressible woodland gnome” is appropriate even when the Red-breasted ventures out of the woodlands and to our feeders.

That the nuthatches are feeder birds tells you that their diet is varied. They may be adapted to foraging on tree trunks for invertebrate protein, but vegetable matter in the form of nutrition rich seeds is prevalent in their diet. Seeds and small nuts give them their name, “nuthatch.” At our feeders, nuthatches are like chickadees and titmice; they grab a sunflower seed and fly off to crack it open. Chickadees and titmice hold the seed between their feet and pound it open with their bill. Nuthatches, by contrast, take a sunflower seed, fly to a tree, and jam the seed into a crevice. Then they pound it open with their bill to release the nutritious kernel.

Nuthatches have been finding food in this manner long before we started putting out bird feeders. We watch them forage from the warm comfort of our homes, which, you must admit, is a very indolent way to observe nature. When observation of nature required walking in the woods (or more likely - working, hunting, harvesting, and foraging), the nuthatch was frequently seen hacking open seeds or small nuts with its bill. Hence its name: nuthatch. “Nut” from its food - probably nothing so large as a hickory nut or walnut, but a small pod which contained seed ... and “hatch,” which is an earlier form of “hack,” from its practice of hacking a seed too large to swallow whole into small pieces.

This hatching requires certain physical adaptations similar to those of the woodpecker - a sturdy bill and muscle strength for pounding. This in turn allows most nuthatches worldwide (there are 25 species) to excavate a nest cavity. The Red-breasted Nuthatch excavates a cavity, and often smears sticky pitch around the entrance hole, probably to discourage other creatures from entering. Our White-breasted Nuthatch is an exception; it uses existing cavities.

Nuthatches are one of the few birds that use a tool. Some will hold a piece of bark and look for food by flaking off other pieces of bark.

So that summarizes the adaptation of the nuthatches to life on the trunks and branches of mature forest trees. These intelligent and agile little birds make their living by acrobatically gleaning invertebrates and gathering seeds and nuts from their arboreal home. They are not aerialists; they fly, awkwardly it often seems, from one food source to another. 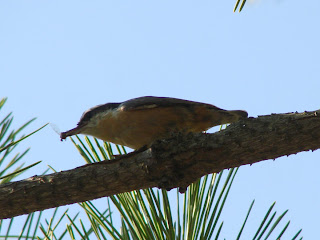 A week ago, I was in a stand of pines on the edge of a coastal marsh looking for shorebirds. The tide was out, so the shorebirds had gone to the rich mud of the tidal estuary and I had to notice other things. What I noticed was a flycatcher sallying from the pines, making a quick circle over the marsh grasses, and returning to the pines. I had glimpsed a tail-wagging phoebe and assumed that the flycatching bird was a phoebe doing what it is designed to do. In the absence of shorebirds to watch, I decided a good look at a phoebe would be in order. I continued to watch the swooping flycatcher bird until I finally saw it return to an overhead branch. But the bird had no tail and instead of perching upright, it clung to the side of the branch. I thought I had missed the return of the flycatching phoebe. Everything about the bird I was looking at said Red-breasted Nuthatch, including the repeated, thin notes: “eeeen, eeeen, eeeen.” It stayed still long enough for me to focus my binoculars.

Then the Red-breasted Nuthatch flew out over the marsh grasses in a quick circle and returned to the pines. Over and over and over it sallied through swarms of insects. Once it alighted, and paused, so that I could see in its beak the insect which it had adeptly snatched in mid-air.

My first thought was - the Red-breasted is not adapted to flycatching. But then I realized that the most important adaptation for the Red-breasted, or any species, is the ability to adapt. The flycatching Red-breasted saw those swarms of rich protein over the grasses and exploited their availability. It did not care that it had not evolved as a flycatcher. Back on the branch, it clung acrobatically upside down while it ate its fly.

We had an irruption of RB-Nuthatches in CT.-I was pleased to have one visiting my feeder-I was equally pleased to see it jab the House Sparrows in their sides!

I just recently read on a NE list that red-breasted nuthatches are being sighted at unusually high numbers around here. I'm excited about that. I have only seen the white-breasted here where I live, and pygmy nuthatches on a trip to Colorado. They are some of my favorite birds.

But then, I say that about a lot of birds.

Unless I'm gravely mistaken, the way the nuthatch opens sunflower seeds by placing the seed in a crevice or split in the bark (and usually below the bird so as it pecks the seed is held in by both gravity and the wedge shape of the crevice) that the bird is making use of a tool. Specifically the wedge.