Late Summer Sightings at the Feeders 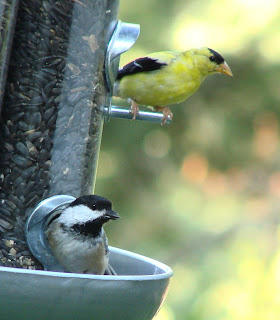 First the birds that have not been in my backyard lately. The blackbirds - they showed up early in the Spring and were regular until early August. By then their nesting and breeding were complete and they abandoned my yard to gather in their huge flocks, and I suppose for some of them, to begin their migrations. Red-winged Blackbirds, grackles, cowbirds, and starlings may be around your area, but they are no longer visiting my feeders.

The Cedar Waxwings which were buzzing so persistently through the tree tops just a couple of weeks ago have apparently taken the kids, who should be old enough now to feed themselves, and gone to join up with others of their kind. Their large, gregarious, nomadic flocks will now wander about our neighborhoods, carousing on fermented fruit through the winter months.

I have not seen the resident nesting Common Yellowthroat. The young are on their own, and the parents no longer have territory to defend or nests to care for. If they are still around, they are skulking quietly.

So what birds are around? All of the expected year-round residents are here: chickadees, titmice, Hairy and Downy Woodpeckers, doves and pigeons. They seem to have concluded their young rearing for the year. Some, like the doves and pigeons have raised multiple broods. The young of all of these are evident, not so much by plumage as by their naivete. They are still slow to take flight, not yet fully aware of the dangers lurking around the yard. 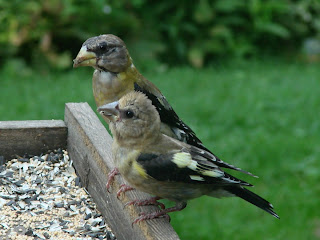 The adult cardinals still come by in the early morning and late evening. One male cardinal is very scruffy - either he is a young bird molting into adult plumage, or a adult changing his plumage. Cardinals may raise three or four broods in a season, and I suspect that the resident pair is still busy with nestlings. Last year there were recently fledged cardinals in mid- to late-September; plumage of the juvenile is much like the female, but the bill is dark.

As recently as last Saturday, an Evening Grosbeak was feeding its young in the backyard. As a nestling, the grosbeak is fed regurgitated insects. I watched the adult crack open sunflower seeds with its powerful beak and feed them into the open bill of the fledgling. These young grosbeaks are undoubtedly a second brood.

Song Sparrows also raise multiple broods during a breeding season, and one of the resident pair is still finishing up with their latest brood; they were feeding young in the yard early this week. 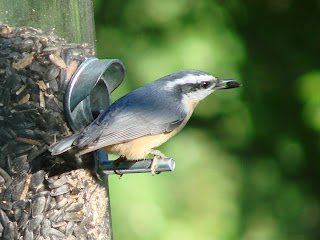 Some of my neighbors in Newfane have enough coniferous forests around their homes that the Red-breasted Nuthatch is a regular, year-round visitor to their feeders. In my backyard, I have come to expect them to show up in the late summer. They are regular for about a month. Then they are a sporadic feeder bird through the Fall and Winter. Smaller than its cousin, the White-breasted Nuthatch (which visits my feeders every single day of the year), the Red-breasted Nuthatch is an active little comic - tame, acrobatic, inquisitive. A delight to have around.

The bee-balm is starting to fade, but the Hummingbirds are still here, now feeding on the phlox and drinking nectar from the hummingbird feeder. There are always two or three around, and I have counted as many as seven. But the hummingbirds in my yard pale compared to those of a friend on Newfane Hill. Her feeder is twice the size of mine and she fills it twice a day. 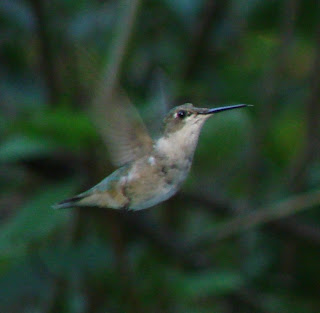 Most of the hummingbirds appear to be juveniles. The male has given up defending his territory from other males, females, and his offspring; he’s probably on his way south. I’ll keep the humming bird feeder out until late September.

The goldfinches are common. They are one of the last birds in our area to nest, often not beginning until mid to late June, but often managing more than one brood anyway. They’re beginning to form into their winter flocks. One or two pair were visitors to the backyard during the early summer; now there are a dozen or more. The bright-yellow males are showing feather wear, looking sort of tattered. They will soon molt into their winter olive drab.

Occasionally joining the goldfinches are a couple of their close relatives, the little brown Pine Siskins. The siskin can be easily mistaken for a sparrow. The siskin bill is thin and pointed, unlike sparrows. A trace of yellow in the wings is very unsparrow-like.

A walk through my yard shows feathers scattered everywhere. The doves and jays, in particular, are molting feathers. I saw a dove yesterday with a day feather sticking out at an odd angle. When it flew, the feather was shaken loose and floated to the ground. When Mourning Doves perch, the tail feathers usually form a long, neat point. The pointed tail of a dove on my feeder consisted of one feather.

A few days ago, I was taking in clothes from our solar clothes dryer. (Older readers might know it as a clothesline - the most energy efficient, cost effective, environmentally friendly, and underused laundry appliance.) From somewhere in a nearby bush I heard movement and rustling, like a cat or groundhog might make if it were barging through the understory. A chickadee called sharply. I looked toward the disturbance. A hawk was beneath the bush, banded tail spread wide. It flew. My glimpse, not much longer than the time it will take you to read this subordinate clause, was of a young Sharp-shinned Hawk, brown-backed, not gray like the adult. By the relatively large size, it was probably a female. I could not see its talons as it flew off so I don’t know whether it had hunted successfully. I suspect not. Its whole manner had seemed clumsy.

After the hawk disappeared and I returned to my solar dried laundry. My mind finally woke up to the Blue Jays’ cacophony in the distance. They called their warning before the hawk attacked, but I had paid no attention. They were continuing to signal the danger. When I looked toward the feeders, the birds were gone. There was silence from the surrounding trees. 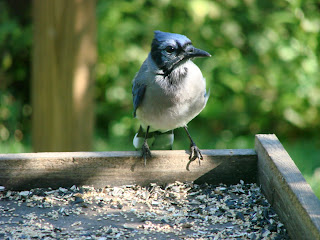 And yes, the Blue Jays are around. A dozen at a time sweep in on the feeders. They shovel seed to the ground for the ground feeders, then pick out one seed, then repeat the shoveling before eating another seed. They tussle among themselves. They are not the unmitigated bullies some people imagine them; grosbeaks hold their own against the jays. So do the timid appearing, passive appearing doves. I suspect that even the birds which appear to be bullied by the jays don’t really mind. The Blue Jays, after all, are the neighborhood’s guardians. In the constant movement, the jays are usually the first to notice danger, raise the alarm, and marshal forces to drive off predators. The young hawk will have a better opportunity to practice its hunting skills if it can find a neighborhood free of Blue Jays.

As you may have gathered, during the late summer there is a lot of good birding in my backyard.