The Osprey - a Favorite with Hawk Watchers 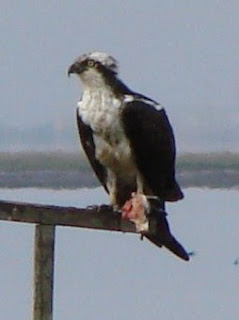 Migration is underway. If the weather has cleared by the time this column appears, the Broad-winged Hawk numbers crossing the Putney Mountain ridge should be at their peak, with potential numbers in the hundreds in a day. The small band of hawk watchers began trekking to the clearing along the ridge line at the beginning of September. They do an actual count of the migrating hawks; the count numbers are sent to a national data base and become fodder for researchers.

The “count” provides an excuse for this quirky sub-group of birdwatchers to pursue their fascination with hawks, and in particular, with the challenging art of identifying hawks in flight. Most bird identification by birdwatchers involves observation of field marks, recognition of plumage, and association of size, shape, and feeding habits with a particular species. But hawks in flight are high overhead, often only a dark profile against the sky. Watching that dark profile as it flaps, or glides, or soars, or stoops and attaching those distant observations to a particular species, is an art. Join the watchers on Putney Mountain and listen as they discuss the identity of a passing hawk, and you will realize that it is an imprecise art. For some, it is also an art that is addictive.

But my interest today is not the hawk watchers, but the hawks - and one in particular: the Osprey. In a typical year, a couple hundred Ospreys may be counted by the Putney Mountain hawk watchers, so it is not an uncommon bird. Even so, the Osprey always creates a buzz as it approaches and passes over, diverting attention from any other hawks which may be visible at the same time. Only an eagle - the less common Bald or very rare Golden - creates a greater buzz and diverts attention for longer.

The Peregrine Falcon also generates excitement, but the Peregrine is likely to pass quickly, as though it has a deadline to meet. Not so the Osprey. It flies steadily and with purpose. It is large, twenty-three inches in length and with a wing-span of sixty-three inches. Among the hawks of the Northeast, only the eagles are larger. The Osprey’s size neutralizes wind and weather. Strong winds buffet small hawks, like the Sharp-shinned or kestrel, bouncing them on the currents, pushing them along like a red maple leaf loose in the air. Not so the Osprey. It flies steady, seemingly oblivious to even the heaviest winds, yet deftly employing those winds to travel with minimum expense, seldom flapping, merely adjusting a wing set or a tail angle for full advantage.

Moreover, the Osprey is likely to travel in all manner of weather. Cloud cover, heavy and low, grounds most hawks. But the Osprey, always born near water, is a habitue of lakes, of ocean coasts with rolling fog banks, and river valleys where morning fog lies heavily long after sunrise. A bit of cloud cover is no deterrent to this master of the gray skies. 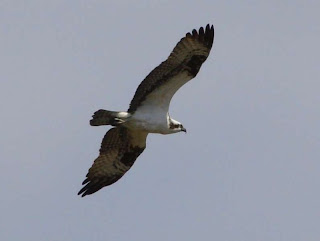 That’s not say that the Osprey cannot soar. It can and does soar. Give it a rising thermal on a sunny mid-day, and the Osprey will circle quickly and effortlessly upward, joining the dozens of Broad-winged Hawks that rely on those thermals during their long migration to the tropics.

When still a dark spot in the sky, hawk watchers are likely to announce the Osprey’s approach. The wing set is their clue. The Osprey looks like a large flying capital “M.” A more technical description is that Osprey’s wings are held above the horizontal with a sharp downward bend at the wrist. Some writers also caution that this wing set can be confused with the wing set of gulls; they caution that the Osprey is the hawk that looks like a gull but is not. If I had not read that an Osprey could be confused with a gull, I would not have known that. Gulls may fly with wings that look like a capital “M,” but they almost always flap their wings. Ospreys over Putney Mountain don’t flap. (At least, they don’t flap like the occasional passing gull.)

The Osprey’s charisma lies in its size, in the steadiness and surety with which it flies, and in the command it exercises of wind and weather. Its charisma may also derive from its sheer presence and relative commonness. Not too many years ago, the Osprey was severely endangered. The pesticide, DDT, worked its way through the food chain, concentrating in the prey species at the top of the food chain - in the Osprey’s case, the fish on which it fed. DDT thinned the egg shells, the end result of which was widespread nesting failure. When DDT was banned, the Osprey began to recover, aided by many recovery efforts. Nesting platforms all along seacoasts, lakes and rivers are the most visible evidence of those recovery efforts which also included rigorous protections, and often hacking programs. Hacking programs involve taking a chick from a distant area, and raising it with surrogate parents (usually underpaid biology students). The success of these programs with Ospreys was probably helped by the fact that Ospreys are genetically programmed to hunt in the Osprey manner; they do not have to be taught by the parents. When the young are able to fly, they begin to fish.

The Osprey has recovered. Especially along the coasts, it is considered common. In southeasternVermont you may see it along the Connecticut or West Rivers from late-March to early November. Many pairs nest near Lake Champlain. I have seen Osprey over Grout Pond, Somerset and Harriman Reservoirs. And of course, during “hawk watch season” on Putney Mountain, they are regular.

The hawk watchers have a rule of thumb that when one Osprey is seen, five minutes later another will be appear. I would not want to subject this rule to a rigorous scientific testing, but it is generally true that the Osprey is an unusually gregarious hawk and travels with others of its kind. John James Audubon often saw flocks of eight or ten Ospreys migrating together along the coast.

Ospreys are also likely to nest in proximity to other Ospreys. In the early twentieth century, Forbush knew of a colony on Narranganset Bay with about seventy-five active nests. In protected coastal areas today where nesting platforms have been erected, it is common to see multiple Osprey nests. Ospreys seem to be able to get along with their neighbors, a characteristic that is not very common in the natural world - nor, for that matter, in the civilized world. Given this characteristic, it is not so surprising that the Ospreys will migrate together, sometimes at five minute intervals.

Of course, many hawks are seen with their kind during migration. Sharp-shinned Hawks often travel together, but as any hawk watcher will tell you, they don’t travel together in peace. Sharpies are constantly in dog-fights with one another, or any other hawk or eagle that may presume to share air space with them. Broad-winged Hawks migrate by the dozens, and sometimes hundreds, and further south by the thousands and tens of thousands. They congregate where the thermals are rising; they watch for distant kettles of broadies to locate the next thermal on the route. But once in the tropics, they disperse widely and singly to spend the winter.

Ospreys don’t seem to need their kind to get along, but they seem to get along with their own kind. I can think of worst ways to live one’s life. I’ll probably have more on the Osprey in the future, but for the moment, the rain has stopped, the sky is clearing, and I’d rather go look at hawks than write about them. And that dark spot in the sky that looks like the “Arches” with the gold turned off - that’s an Osprey. Good birding.

Email ThisBlogThis!Share to TwitterShare to FacebookShare to Pinterest
Posted by Chris Petrak at 7:50 AM
Labels: Osprey, Putney Mountain Hawk Watch

I've noticed that Osprey usually seem to have a companion.-Interesting observation-and nice post!