Barred Owl - Our Most Common Owl 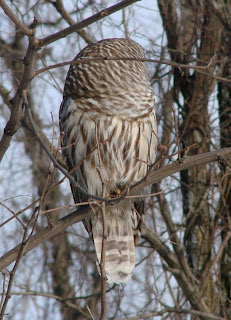 Coming out of Brattleboro on a faux Spring day last week, just pass the Retreat Meadows I saw something white and brown in a tree close to the road - not the erect posture of a hawk, but a stubby, round posture that said, “Owl.” Fortunately, there were no vehicles in front of me or behind me so I could brake suddenly with safety. And the berm was wide, so I could exit rapidly and also safely. (Getting smacked by a vehicle when chasing a bird can ruin the chase.)

The Barred Owl was so close to the road that I only grabbed my camera. It was looking at something in the direction of the West River. I took a couple of pictures of the back of its head, then began maneuvering through the snow bank for a better angle. I got the better angle. The owl’s head swivelled at my noisy disturbance through the crunchy snow, considered me with distaste for a moment, and then flew.

Fortunately, it merely crossed the road and found a new perch among tall trees. It perched with complete ease, even as I again maneuvered along the roadside for an unobstructed view through the barren branches. My camera whirred away. 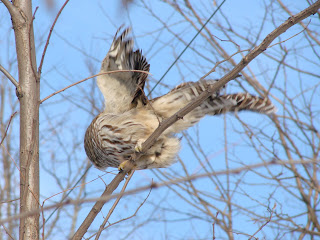 Then I began to hear a bird call that I don’t remember having heard before. Just before I had braked for the owl, I had made a quick stop to insure that the mockingbird perched on a wire was in fact a mockingbird and not a shrike. Now the mockingbird had come across the road. The unfamiliar calls I heard were strident, warning calls; the mockingbird began harassing the owl, boldly. It flew within a few feet of the owl, screaming as loudly as a mockingbird can scream, then flew back and yelled some more. A couple of times it appeared to peck at the back of the owl, and once it looked like it had landed on the owl - ever so briefly. To say that the mockingbird was unhappy with the owl’s presence in its neighborhood is an understatement.

Soon after the mockingbird began its noisy harassment of the owl, chickadees began calling. Downy Woodpeckers chimed in. The troops were rallying. The alarm had been sounded; the danger passed along. However, I did not see any of the small birds join the harassment, and, after a few minutes, the mockingbird allowed discretion to replace valor and moved some distance away. If there had been Blue Jays in the neighborhood, they would have been much more aggressive.

This harassment of a predator is called “mobbing.” It is a collective response to danger. At the very least it alerts the bird community to the threat and sometimes results in driving away the enemy. I have often seen crows harassing a Red-tailed Hawk along an interstate; they usually succeed in chasing away the hawk.

A few summers ago on a Newfane hill, I heard an unholy racket from a mob of crows. I could only get glimpses of the crows through the tree tops and I never saw the object of their odium. But in the deep woods, I was quite sure that they had found a Barred Owl and were more than a little unhappy about their discovery.

The Barred Owl is the most common owl in our area. At twenty-one inches, it is large. It is stocky, round-headed, with a grayish-brown back speckled white and a streaked (barred) belly. It has an orange-yellow beak and black eyes. It is the only owl likely to be seen in our area with black eyes. 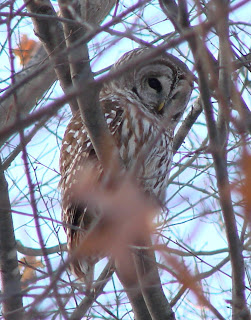 The Barred Owl usually perches high in trees and close to the trunk. It hunts from a perch closer to the ground, and almost always at night. Unlike the powerful Great-horned Owl, the Barred Owl has weak talons which impose limits on what it is capable of killing. Most of its prey consists of small rodents: mice, rats, chipmunks, squirrels, moles, shrews, bats, young rabbits. In his life history, Bent cites the conclusion of a researcher: “Altogether, the Barred Owl seems endowed with about as mild a personality as a raptor could have yet maintain a predaceous existence, in some instances subsisting for considerable periods upon large invertebrates (insects and crayfish) or upon fish and amphibians.”

That being said, the Barred Owl is similar to most other predators. It will eat whatever is available, including birds. The list of documented birds in the food of the Barred Owl is long. While primarily nocturnal, there is plenty of evidence that it also hunts in broad daylight. The owl I watched being harassed by the mockingbird may not have been hunting, but like all raptors, it posed a potential danger to songbirds, and danger cannot be ignored.

The Barred Owl is normally a bird of the forest, but in the winter it may venture into villages and towns. The one I saw was very close to Brattleboro. Burlington has had several reports of an urban Barred Owl. And in general, there are been an unusual number of daytime sightings of this owl in recent weeks.

Last summer rodents had a prolific breeding year. This in turn produced higher than usual nesting success for many raptors that feed on the rodents, including Barred Owls. The young owls are inexperienced hunters; they often have a difficult time getting enough to eat. They feed on roadkill, but become victims themselves of vehicles. They often turn up on the doorstep of rehabilitators injured or emaciated. 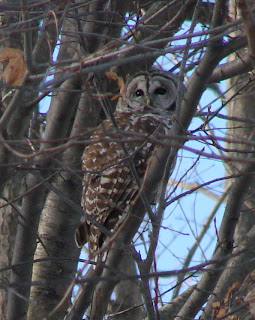 Now add an early winter with deep snow, and the challenge of survival becomes greater, even for experienced adults. They must take food when and where they can find it. They must do so in these harsh conditions successfully for at least two more months. Then, sometime in late March, they may begin their nesting season.

In 1927, Edward Forbush witnessed a Barred Owl performance which I have to share with you. He wrote: “At one of my lonely wilderness camps in the month of March a pair of Barred Owls came to the trees over my campfire and made night hideous with their grotesque love-making, banishing sleep during the evening hours. Their courtship antics, as imperfectly seen by moonlight and fire light, were ludicrous in the extreme. Perched in rather low branches over the fire they nodded and bowed with half-spread wings, and wobbled and twisted their heads from side to side, meantime uttering the most weird and uncouth sounds imaginable. Many of them were given with the full power of their lungs, without any regard to the sleepers, while others were soft and cooing and more expressive of the tender emotions; sounds resembling maniacal laughter and others like mere chuckles were interspersed here and there between low wha whas and hoo-hoo-aws.”

Email ThisBlogThis!Share to TwitterShare to FacebookShare to Pinterest
Posted by Chris Petrak at 7:16 AM
Labels: Barred Owl

Really like your piece on Barred Owls. Here in Pennsylvania and I think further south they are often associated with swamps. I was fortunate enough to have a pair (the same pair?) nest in my yard for 5 straight years. There was one year when I found many decapitated birds in the yard and figured out it was the owls. They have a variety of calls and watching them as their family grew was a real treat.
Vern

I read an article in the paper about barred owls being in trouble this winter because of the deep snow and ice. I have spotted one several times perched right over my bird feeder. Is there anything I can put out for him to eat

Thanks for the great photos and info about the Barred Owl. I live on the Lamprey River in Lee, NH and I have a Mother, Father and 2 babies that are living amoungst us right now. I love to listen to the two adults talking back and forth each evening and we have see the two babies on 2 seperate occasions. I had a very close encounter last week with the Mother as she was perched in my fence overlooking our beach and when I walked out onto my patio at 10ish pm, she proceeded to turn her head and pretty much stare me down for about 25 seconds. As I was only 3 feet from her, I thought better and stepped back into the house and closed the slidding door. Her beak was much larger that mine and she did not look very happy about me interupting her hunt. She stayed there for another 20 minutes and then gracefully soared across the river without a sound and carelessly picked up a snack along the way, even that snack was whisked away without a peep. One of the most spectacular things I have ever seen,,,,,aahhh, life along the river, beautiful!

We have had a nesting pair in our backyard (a pocket swamp on the Hillsborough River, Tampa smack in the middle of suburbia) for 7 years. When Chester, the male- first showed up- it was the only time I have seen a raptor join in on mobbing an owl. I first heard the Blue Jays and Mocking Bird alarm calls- then the neighboring Red-shouldered hawk joined in, he was really screeching. The hawk and the other birds were all taking turns at dive-bombing the Barred owl. Collaboration against a common enemy.