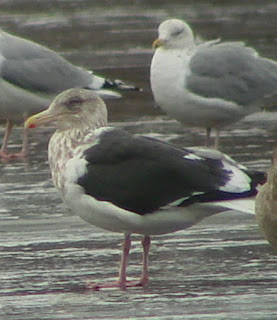 I was on a narrow road near Niles Pond on East Point in Gloucester, Massachusetts. I had just gotten in the car when a walker stopped by the driver’s window. I lowered the window. He asked, “I notice a lot of people are taking pictures today. How come?”

“There’s a rare gull out there,” I replied. My answer seemed to leave him unmoved. So I added, “It’s from the eastern Pacific.” He still seemed unimpressed, but muttered a “Thanks” as he continued on down the road. Gulls just don’t excite some people.

On the other hand, many birders get excited by gulls. Niles Pond on Cape Ann is a regular stopping place for birders, especially in the winter when gulls gather there by the thousands.

The unusual object of interest on Niles Pond this year is the presence of a Slaty-backed Gull. It is native to coastal areas and islands of northeastern Asia, with the largest breeding concentration being Kamchatka; it is sometimes called the Kamchatka Gull. In winter it often ranges south to Korea and through the islands of Japan. A few non-breeding and winter birds find their way to western Alaska. In North America it is a rare vagrant, usually found from southern Alaska to Oregon.

But, in the last twenty years the Slaty-backed Gull has been turning up in widely scattered locations including Ontario, Missouri, Texas, Florida, and Hawaii. Last year one was recorded at a water treatment plant in Rochester, New Hampshire.

On December 23, while birding on the Jodrey Fish Pier in Gloucester, David Sibley (of the Sibley bird guides) identified a Slaty-backed Gull sleeping on a flat roof on the waterfront, although he had to wait for the bird to awake and take flight to confirm the identification. About an hour later, a staff member of Massachusetts Audubon observed a “suspicious” gull on Cape Cod while doing a Christmas Bird Count. This also was a Slaty-backed Gull. Eventually a third one was found in Gloucester, leading the Boston Globe to report “A Russian Invasion in Gloucester.”

Most gulls belong to the genus Larus, including all of the regularly occurring gulls in North America. In the Northeast, the three most common gulls are all white-headed Larus gulls: Great Black-backed, Herring, and Ring-billed. There are enough size differences and distinctive field marks that identification of adult birds is seldom difficult ... if you only have these three gulls to tell apart.

But when additional white-headed gulls get thrown into the mix, then identification can be challenging. My first sighting of the Slaty-backed Gull was through the spotting scope of a Massachusetts birder and photographer. That gave me the angle and I was able to find it with my scope. It was among several hundred other gulls on distant rocks on the ocean side of Niles Pond. At that distance it looked very much like a Great Black-backed Gull. I could see differences between the Slaty-backed and the Great Black-backs, but they were subtle differences. I doubt I would have found the bird on my own. 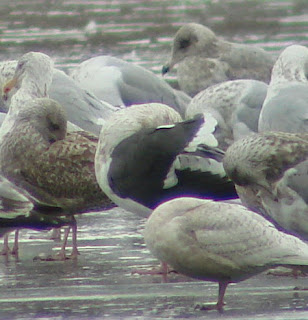 It takes several years for gulls to reach maturity, and it is not unusual for young gulls to wander widely. It is more unusual for mature gulls to wander. The Slaty-backed Gull I saw at Niles Pond was an adult, at least four years old. Adult gulls are a challenge to identify, but there are usually differences in field marks, size, or shape which enable a sorting out. Immature gulls are more difficult. Plumage varies each year as the gull matures and molting from one plumage to the next adds more variation.

Then add in to the mix the close relationship among the Larus gulls. Speciation occurs when populations become isolated from one another and evolve according to local needs and conditions. In evolutionary terms, the Larus gulls have been evolving for only a short time. How these gulls are classified as species and subspecies is a subject of intense debate among scientists.

Take, for example, the Herring Gull: Most classify Larus argentatus as a single circumpolar species, with at least three subspecies (or races) - Asian (“Vega”), North American (“American”) and European. Some taxonomist accord species status to each, giving them there own common and scientific names: Vega Gull, American Herring Gull, and Herring Gull, with the latter having British/Iceland and Scandinavian races. Within their own range, each is distinguishable. But ranges overlap and one species (or subspecies) grades into the next.

A few birders with the time, patience, and opportunity to study gulls are able to sort out the many variations among and between species and even to identify the parentage of hybrids. But some apparent hybrids remain mysteries. “Unidentified gull” is the label attached to some gull photographs which are posted on web blogs and other birding sites by these Class A birders. 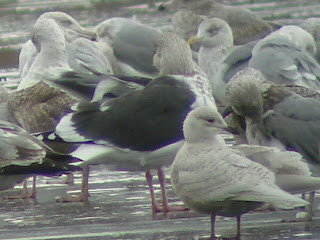 I don’t have the time or opportunity to do enough gull watching to become good at it. If there is a rare vagrant among a mixed flock of several hundred gulls, I am probably going to miss it. However, the Slaty-backed Gull was a first Massachusetts record, and the Massachusetts birders were all atwitter. When I headed to Cape Ann on that cold morning last week, I was sure I would find experienced gull watchers watching the gulls. I did. They showed me the gull, and later, knowing what I was looking for, I found it for myself.

I have no idea how an Asian gull (three, in fact) from the Pacific ends up on a pond near a Massachusetts fishing harbor. But it did. A life bird in the middle of a New England January is a good way to start a new year.

Email ThisBlogThis!Share to TwitterShare to FacebookShare to Pinterest
Posted by Chris Petrak at 7:56 AM
Labels: Slaty-backed Gull