Bush Is for the Birds ... but What about Birdwatchers?

Every issue of Audubon, the magazine of the National Audubon Society, has a section of “Field Notes” - brief items about birds, wildlife, and conservation that have recently been in the news. In the most recent issue (January-February 2008), one of those “Field Notes” carried the dateline, “White House,” and the headline, “Bush is for the Birds.”

When I read the headline, my first reaction was, “So, what else is new.” National Audubon Society, along with almost the entire environmental and conservation community, have harshly criticized the current administration for practically everything it has done, or not done, over the past seven years, including (but not limited to) censoring global warming reports, inadequately funding the National Park Service, and adding the fewest number of species to the endangered species list of any presidency in the last thirty-five years.

Suspecting there might be a double entendre behind the headline, I read the article. It began: “One day last October, Audubon’s editor-in-chief received a phone call that nearly knocked him off his chair. The White House Office of Media Affairs wanted to know if the magazine would like to cover an event in three days at which President George W. Bush would announce major bird initiatives.” This was a totally unprecedented contact.

An Audubon reporter attended the Saturday morning event. The President and First Lady arrived in a fuel deficient Chevy Suburban. The President announced a “grab bag of policies to benefit birds,” and explained that “‘[These policies] show our commitment to protecting America’s migratory birds, conserving habitat they depend on, and ensuring that generations of Americans will enjoy the beauty of birds for decades to come.’” 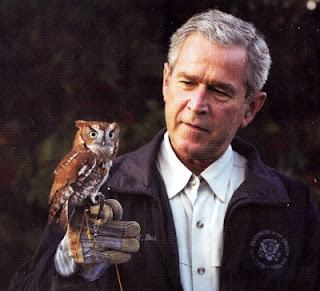 The article speculates that this twilight interest in birds might stem from Laura Bush, whom the President describes as his very own “birdwatcher extraordinaire.” The article then concluded, as it must, with this caution: “if he ends up carrying through with his promises and putting birds on the political map, it may well be good news.” If!

The Audubon report included a photograph of President Bush holding a screech-owl on a gloved hand. He looks a little uncomfortable. Texas ranchers are more accustomed to picking up dead birds they have just shot, than to holding live ones. In a burst of spontaneous eloquence, he referred to the screech-owl as a “cute little fellow,” although this eloquence hardly matched that of his father who referred to the Northern Spotted Owl as “that little furry-feathery guy.”

The bird-friendly initiatives announced by the President are better than none - if implemented. We can only hope that they are not too little, too late. A recently completed, comprehensive analysis of all birds in the United States lists 217 of 700 U.S. species on the WatchList. Fifty-nine continental species are considered to be in danger of extinction. Photo-Op events for politicians and green image burnishing is not going to address threats from critical habitat loss, toxic pollution, or global warming.

Bush may be for the birds, but, tempted as I am to elaborate, this is not a political column. I am reminded of that trite but true adage that when you point a finger at another person, there are three fingers pointed at yourself. While bird loving birdwatchers continue our criticism of the environmental disaster that this current administration has been, we ought also to question whether we are for the birds. 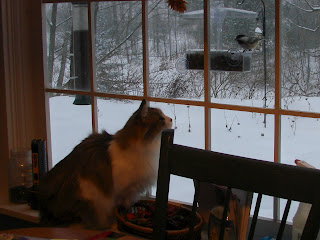 Bird loving birdwatchers who let their cats roam outside are for the birds. Domestic cats kill millions of birds and small animals every year. They take a bloody toll. They have no way of distinguishing between an invasive pest like the House Sparrow and starling, and a rare Dickcissel migrating or an endangered Bicknell’s Thrush which may pause in the neighborhood on its long journey. A fledgling Mourning Dove on the ground has little awareness of danger and is easy prey for beloved tabby. A young Ruby-throated Hummingbird hovering by a late August bee-balm in the backyard garden is within easy reach of the crouching cat out for a prowl. You might like to think that your cat has gone out for a walk and some exercise, but it is predator on the prowl.

It is stating the obvious: bird feeders and cats are a bad mix.

So, you are a bird loving birdwatcher. You do not let your cat outdoors. Or even better, you have a small dog. A small dog running in the backyard rarely gets blamed for anything, and unlike a cat, quickly comes home when called. You enjoy sitting with a cup of coffee, watching the birds at your bird feeder. In the Spring, you are especially anxious to see the return of certain birds to your feeders - a Rose-breasted Grosbeak perhaps, or Indigo Bunting. You put out oranges for the Baltimore Oriole, and you watch the trees carefully for fleeting glimpses of one of the colorful warblers.

Your coffee came from a one pound, or maybe a three pound, can which you purchased in the super market. It is one of the major brands and you got it for a good price - perhaps $2.50 - $3.50. Per pound

But that cup of coffee was almost certainly grown on a sun-coffee plantation, very likely in Brazil or Columbia. Small coffee shrubs are in neat, closely packed rows. There is no ground cover, no mulch, no shade trees. There is nothing to enhance soil fertility or prevent erosion. The farms rely on synthetic fertilizers, insecticides, herbicides, and fungicides, usually applied by workers with little training and no protective clothing. They are biological deserts. There is no habitat for those wintering songbirds you love to see. Feeding the birds, and drinking that kind of coffee is for the birds.

But you can still have your cup of coffee, and feed the birds, and be for the birds. You can also be a good capitalist, an environmental activist, an advocate of social justice for farm laborers, and a birder committed to species protection. You can be all those things by buying coffee that is shade grown and/or organic. The fact is that how the beans in our morning cup of coffee were grown is more important to the long term diversity of our local bird life than the many dollars we spend on squirrel-proof bird feeders (there is no such thing, by the way) and those bags of bird seed.

Shade-grown and/or organic coffee is more expensive than the supermarket canned stuff. But add up the extra cost and compare it with the cost of bird seed for the year. If you can’t afford both, go for the coffee. Our local feeder birds can survive without our bird feeders. Our tropical migrants (like the Rose-breasted Grosbeak or Baltimore Oriole) need a place to live winter after winter, if they are going to return spring after spring and fill our woods with their song.

Two things you can do for the birds: keep your cat indoors, and drink shade grown and/or organic coffee. Frankly, I doubt that Bush is really for the birds, but I do hope that birdwatchers are for the birds.

Email ThisBlogThis!Share to TwitterShare to FacebookShare to Pinterest
Posted by Chris Petrak at 7:08 AM
Labels: Bush is for the birds

I have switched to shade grown coffee or at least organic when I can't find shade frown.-My cat is indoors only too-but I'm sure that I do plenty of things that aren't great for the enviroment-I'm glad that Laura Bush has some influence on her husband.