The Bird That Dances on Water

Bird watching stimulates many different reactions within me. A brilliantly colored bird, like an oriole might stimulate a “wow.” Amusement comes from watching fledglings fluttering their wings and begging food, or ravens playing on the wind, or nuthatches just being nuthatches. There is drama when a hawk stoops, and a gasp of surprise when a grouse or woodcock suddenly flushes - pleasure when an unexpected bird appears - concern when the temperatures plunge and the birds hurry to and fro from the feeders for energy to fight the cold. 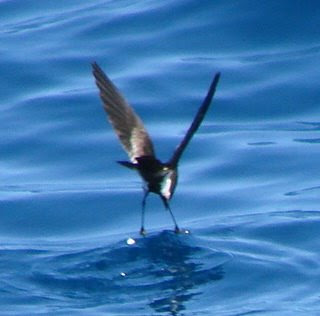 Often I am mesmerized by the birds, but seldom am I so delightfully mesmerized as I was when I watched birds dancing on water. Far from land, where sky and ocean mingled in shifting blues and grays, small dark birds followed the wake of our boat. Swallow-like, they dipped to the water’s surface. Their feet pattered. Beaks dipped to scoop some morsel, wings lifted them, then they dipped again. With long, stick-like legs, they danced along the water, webbed feet barely touching the surface, skipping and prancing with a lightness and grace that would be the envy of a prima ballerina. As they neared the stern, they lifted easily into the air, circled widely, and again dipped to forage what the wake had stirred.

Wilson’s Storm-Petrel is common in New England waters during the summer. Whenever I have taken a ferry or whale watch that has sailed ten or more miles from the coast, I have seen this small seabird, usually one or two, typically resting on the water, or taking flight at the approach of the boat. But on this occasion in late August, ten to fifteen birds followed the boat, dipping and tip-toeing and dancing along the water, and I was enraptured as I watched them.

There are two storm-petrels which are common in the North Atlantic: Leach’s and Wilson’s. Leach’s Storm-Petrel summers in the North Atlantic, nesting on islands. A few years ago I accompanied an ornithologist to Kent Island, near Grand Manan Island in the Bay of Fundy, where an estimated 20,000 pairs nest in underground burrows, raising one chick a year.

Wilson’s Storm-Petrel, by contrast, winters in the North Atlantic during our summer. When our weather turns it migrates south; when it is summer in Antarctica and the South Atlantic, it nests in colonies on islands and remote land masses. 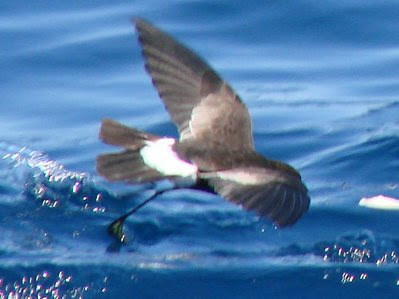 The wintering Wilson’s Storm-Petrels danced along the water’s surface with agility and delicacy, somewhat contrary to what their name might imply. “Petrel” may mean “Little Peter.” The name is an allusion to Peter’s tentativeness about walking on the water of Lake Galilee when Jesus called Peter to come to him. When landing on water, petrels dangle their feet and appear hesitant about alighting - seemingly, like Peter, unsure whether they might sink to the bottom. At least, this was the origin put forth by the English buccaneer and navigator, Dampier, also known for having rescued Robinson Crusoe (nee Alexander Selkirk) on a voyage which netted him a huge fortune. My somewhat more staid English resource for bird names says that “petrel” comes from “pitterel,” inspired by the jingle “pitter-patter,” and is an allusion to the birds tapping the water with their feet as they skim the surface.

So “petrel” derives from a biblical allusion or the refrain of a sea chantey sung by bored sailors. Take your pick.

Storm-petrels are seabirds in the Family Hydrobatidae. They are small dark birds, distinguishable by naturalists, but looking alike to the common sailor concerned mainly to reach the next port safely. Often when these birds were seen on the open sea, their presence presaged a storm, which led the sailors to call these small dark birds “storm-petrels.” The truth behind the sailors’ name is that storm-petrels are more active just before storms and seem to delight in stormy weather. A group of petrels sitting quietly on the water is said to be a sign of calm weather, which it often is ... at that moment. 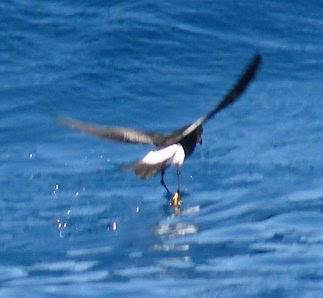 Storm-petrels also have one of the most unusual folk names I have encountered: “Mother Carey’s Chicken.” The origin is a mystery, but somehow related to the sea. Mother Carey is only mentioned in connection with storm-petrels. It has been suggested that Mother Carey was some unknown hag, that she is the aunt of Davy Jones, or that she is a witch of the sea accompanied by imps in the form of the little black birds. In sharp contrast, it has also been suggested that Mother Carey derives from Italian madre cara, meaning “dear mother,” a title for the Virgin Mary. Sailors of southern Europe prayed to the “dear mother” when the gales began to blow. No great linguists, the English sailors rendered it as “Mother Carey.”

The storm-petrel which delighted me as it danced on the water is named in honor of Alexander Wilson, the father of American ornithology. Now overshadowed in the popular memory by John James Audubon, Wilson has been described as a great ornithologist with an artistic talent, while Audubon was a great artist with a talent for ornithology. Wilson recognized that his storm-petrel did not breed in the North Atlantic and speculated that perhaps it bred in the Bermuda and Bahama Islands. Audubon, on the other hand, confused Wilson’s Storm-Petrel with Leach’s Storm Petrel and confidently asserted that the Wilson’s breeds on small islands south of Nova Scotia - the breeding territory of the Leach’s. 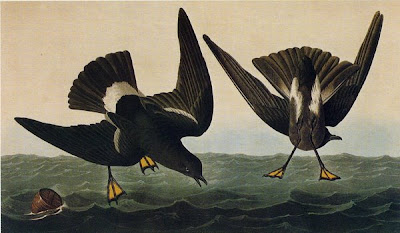 Audubon may not have known the difference between Wilson’s and Leach’s Storm-Petrel, but his painting of the Wilson’s is delightful.

Wilson’s Storm-Petrel is a small bird. Its body is just over seven inches; its wingspan is about eighteen inches. Body size and wingspan are about the same as that of a Purple Martin, our largest swallow. The storm-petrels are often called sea swallows. Even as I was charmed watching them dance on the water, I had an “ah-ah” experience as I felt the swallow-like flight in their wingbeat and glide.

Swallows feed on the wing, swooping and swirling to capture flying insects. There are no insects over the ocean. (The pelagic birding trip I was on provided a whole day of summer birding without a single mosquito bite.)

But the flight of the storm-petrels is only superficially swallow-like. What distinguishes the Wilson’s Storm-Petrel is not its flight but the way it feeds - its foot-pattering action while hovering on wings and grabbing nourishment from the surface. All of the storm-petrels do this foot-pattering, but the Wilson’s does it more often. It is the bird that dances on water.

Email ThisBlogThis!Share to TwitterShare to FacebookShare to Pinterest
Posted by Chris Petrak at 6:00 AM
Labels: Wilson's Storm Petrel

Enjoyed you shorebird pics and comments. I have to do this kind of birding "from a distance" as we live in the only county in the land of 10,000 lakes without a lake

Thrilled to see Wilson acknowledged and praised for his contributions to ornithology. I wrote a biography on him this past Fall for a class I was taking, and we just don't hear nearly as much about him as we do about Audubon.