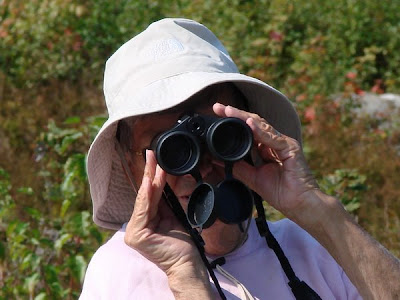 The Putney Mountain Hawk Watch is a relatively small hawk watch site, as hawk watch sites go. The combination of ridge and elevation help to bring migrating hawks over the watch site at a low enough elevation that they can be seen. A short walk (15 to 20 minutes) makes it easily accessible to many hawk watchers.

New England hawk watch sites, like Putney Mountain, routinely produce Broad-winged Hawks counts of several thousand during the peak migration in mid-September. Even so, around New England there are several places where mountain tops provide better geological assistance to migrating hawks; the Broad-winged count from these sites usually is much greater that what is reported from Putney Mountain.

As the Broad-winged Hawks proceed from their breeding grounds in Canada and the eastern United States southward, they become concentrated along flightways (the Appalachians and the Mississippi Valley). The further south a hawk watch site is located, the greater the numbers are likely to be - from a few thousand Broad-wings in New England to several tens of thousands. This funneling peaks in the United States near Corpus Christi, Texas, where half a million Broad-winged Hawks are counted in late September.

Putney Mountain is one of the few full-time hawk watch sites in New England, and the only one in Vermont. During September and October at least one watcher is on the ridge every day except when the weather is bad. Hawks migrate during the warm part of the day, so the hours of coverage tend to compress as the season progresses. But in September, coverage often begins by 8:00am and often continues until 4:30 or 5:00pm. 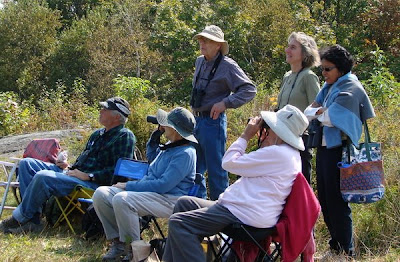 On Putney Mountain, it is all done by volunteers - by people with an odd assortment of backgrounds who are united by a common fascination with birds of prey, with the beauty and power of their flight, and the challenge of distinguishing the birds as they pass overhead. One person volunteers to cover a day of the week, but most days there are several people present and helping to spot and name the birds.

Most of the time, the hawk watchers on Putney Mountain are a friendly group of people who are happy to talk about hawks with anyone who passes by. That is not always the case. We often hear visitors to Putney Mountain talk about the aloofness of hawk watchers at some other sites. (“Aloofness” is my kindly synonym for some much less complimentary adjectives often used.)

In our world of instant messaging, sound bites, and constant contact, hawk watching is an unusual passtime and hobby. It often involves staring through binoculars at the sky for hours, looking for a tiny dark speck that is a hawk. Often when a hawk appears, it disappears; in a few seconds it has come and gone.

“What was that?” a visitor asks.

In that question, is the attraction of hawk watching. How does a hawk watcher know? It has to do with such things as profile, body and wing shape, wing beat, flight pattern, and attitude. (Sharp-shinned Hawks and the Merlin, a medium-sized falcon, have “attitudes.”) Help can come from some good guides that focus on hawks in flight, but experience is the final arbiter that enables a watcher to say confidently that a distant bird, gliding steadily on “m” shaped wings is an Osprey, or that the delicate wisp on pointed wings being tossed about in the wind is a kestrel. 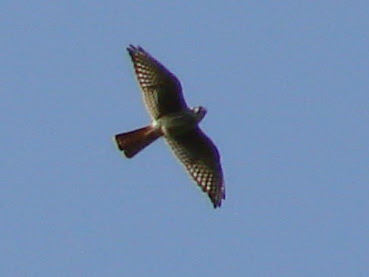 Experience comes with patience. Admittedly, it also means having the time - being retired, self-employed, or otherwise having flexible schedules all help. (Occasionally on Putney Mountain there are enthusiastic young eyes that would put in the time if it weren’t for professors that take attendance or employers that demand their presence.)

So how has this year been on Putney Mountain? Early September was difficult. Long hours in the bright, hot sun produced few birds. It took almost week to count the first hundred migrating hawks, and another week to scrape over the thousand mark. Mid-September (10th to 20th) is the time for the big Broad-winged Hawk movement. Halfway through the peak period, it still hadn’t happened, and some were beginning to worry that it would not happen this year. There had been no strong weather patterns that help concentrate the broadies along the ridge, and no strong weather patterns were predicted. 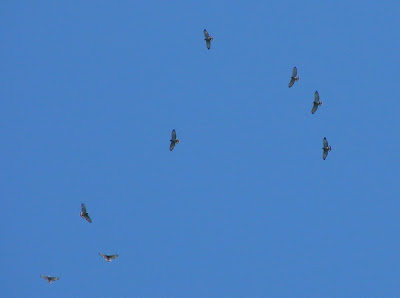 September 15 was a pretty good day, but the strong winds dispersed the thermals on which the Broad-winged Hawks depend for lift. A couple hundred broadies were counted, but the highlight of the day was the variety: nine species of hawks were migrating, and three more resident species were observed.

The next day, Broad-winged Hawks began flying about 9:15. The numbers were modest. One here, two there. A few minutes later, four passed over. Hawk counts are done in one hour segments. During the 10 o’clock hour, distant broadies were counted as they rose out of the Connecticut River Valley - over 200. The number of hawk watchers climbed during the morning; by the 11 o’clock hour there were ten watchers scanning in all directions, looking for Broad-wings as they streamed from one thermal to the next, or as they rode the rising warm air of a thermal close to, or above, the ridge. The hour produced over 500 hundred birds. 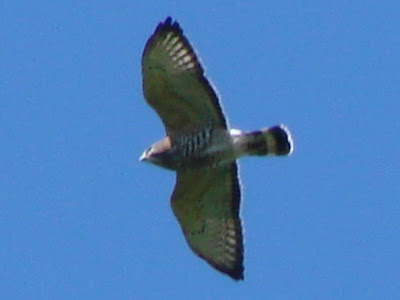 Often a Broad-winged flight peaks during the hour around Noon, then begins to taper off or even come to a virtual end. But on this day the 12 o’clock hour produced 40 here, 30 there, another 20 in the valley, an additional 35 overhead, and by the end of the hour the count was over 600 for the noon hour. The 1 o’clock hour finally seemed to bring a tapering, until birds again rose out of the river valley. Over the ridge just south of the watch site, they kettled up, a swirl of birds rising in two masses - 70 birds in the higher group, 60 in the lower group. The count for the 1 o’clock hour broke 500.

Finally in the mid-afternoon the Broad-winged Hawk flight started to ease off, but the modest numbers continued to add up and the hawk watchers began to realize that this was going to be the best day on Putney Mountain - ever. When the day finally ended in the late afternoon, the count included one harrier, one Red-shouldered Hawk, 2 Bald Eagles, 2 kestrels, 14 Osprey, 42 Sharp-shinned Hawks, and 1821 Broad-winged Hawks - a total of 1885.

By everyone’s definition, it was a day of good hawk watching.

Email ThisBlogThis!Share to TwitterShare to FacebookShare to Pinterest
Posted by Chris Petrak at 6:00 AM
Labels: Putney Mountain Hawk Watch

You captured the date great! Even when you had to have the pencil most of the day, rather than binocs on your eyes.