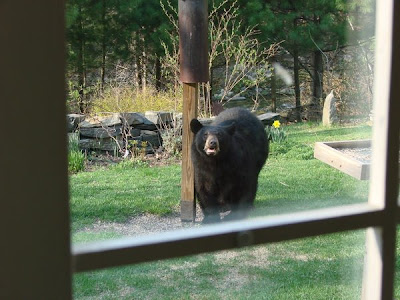 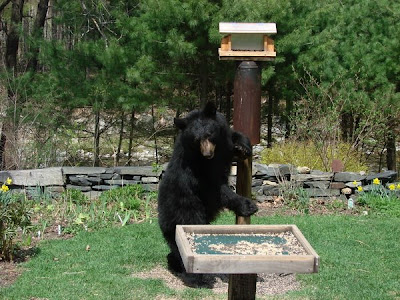 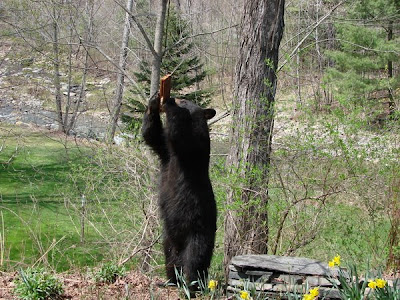 And I thought the squirrels were bad!

I've been bringing the feeders in at night, but this guy showed up on Monday, and again Tuesday, during the day. The birds had already eaten their seed allocation for the day, so there wasn't much for him, but he created quite a stir in the neighborhood. I had a kitchen full of people watching him.

My cats, on the other hand, took one look through the window and went dashing off to hide under a bed. They seem to put the bear in the same category as grandchildren. The window feeders are now at the top of the windows - about 8' off the ground. Suet feeders will not go out until I can figure some way to hand them at least that high, and maybe not until the Fall.

The suet feeder that the bear is reaching for was about 6' high. Doesn't look like he can reach much higher. On the other hand, it may be best not to tempt him with smells.

After the first bit of excitement, quite frankly, this is a pain! I'd rather have the birds.

Email ThisBlogThis!Share to TwitterShare to FacebookShare to Pinterest
Posted by Chris Petrak at 2:28 PM
Labels: Bears and Feeders, Black Bear

Wow! I thought the raccoons were destructive! Scary. too.

Oh my goodness!! I can't even imagine having a bear in my backyard. You made me laugh out loud when I read your line about your cats. I think my cat, Bip, would do the same thing...high-tail it out of there!