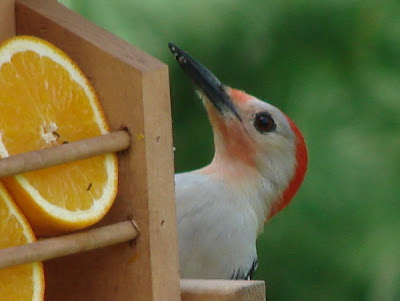 The Red-bellied Woodpecker is an established Vermont Bird, on its way to becoming as common as the many other flatlanders that have moved north to make the state its home. The Red-bellied Woodpecker is being reported at feeders all around Windham County, and it should come as no surprise to you if one shows up at your feeder. In my backyard, it occasionally feeds on the suet along with the downy and Hairy Woodpeckers, but it is more likely to cling to the bulk seed feeder and consume whatever is in the seed mixture. Last Spring, a Red-bellied was also attracted to the oranges which I put out for the orioles. 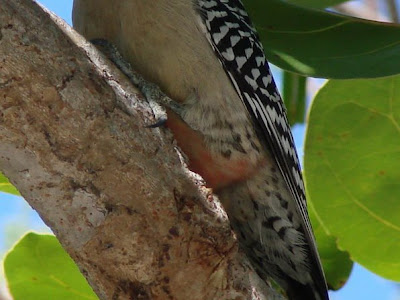 Early ornithologists studied birds in their hands - they “collected” birds with a shotgun. They were able to see things about birds that are not apparent to the modern bird watcher in the field, and they sometimes named birds for those characteristics. The red belly of the Red-bellied Woodpecker is a case in point. When I was birding in Florida last year, there were several occasions when I had a good angle on breeding Red-bellies and saw the red belly. But the pair that have been frequenting my feeders since late last fall have yet to expose their red belly for my admiration. 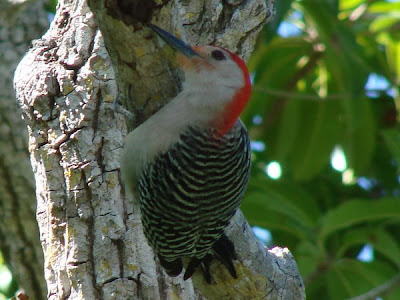 Historically, the Red-bellied was a mere straggler in New England, and during settlement and industrial expansion, it gradually withdrew from all of the Northeast. Forbush reported that the bird had once been common in the lower Hudson valley, but by 1925 had virtually disappeared. Along with the Red-headed Woodpecker, its range retired westward and southward during the nineteenth and early twentieth centuries.

The Red-bellied Woodpecker is handsome and conspicuous. During the breeding season, it is also very noisy bird. Often when I bird Cape May and the Jersey shore in the Spring, it is the most common woodpecker seen - and heard. Its "churr-churr" seems to be everywhere.

This morning when I went out for the paper, and later for the mail, I heard the “churr-churr” from the trees around my home. It seems quite likely that the wintering pair will be taking up residence this year.

Newer bird guides usually note the Red-bellied Woodpecker as common in its southern range, and as extending its range northward. During the 1990s, its nesting range moved into Massachusetts and sightings in Vermont increased. It was been anticipated that eventually the bird would nest in Vermont. 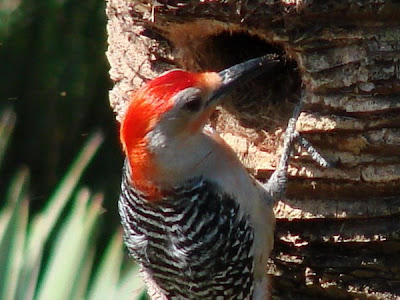 In 2001, it did. A backyard birdwatcher in Brattleboro reported: "Several weeks ago my wife noticed a woodpecker in the willow tree in the yard next door here in Brattleboro. We started watching and found that there is a pair of Red-bellied Woodpeckers. They were using a hole about 40' up in the tree. A couple of weeks ago my daughter saw them carrying away egg shells ....” Then a short time later, he reported again: "My daughter saw the babies sticking their heads out of the hole yesterday." With the added evidence from a video camera, which included the distinctive “churr,” this became the first confirmed record of the Red-bellied Woodpecker nesting in Vermont.

From that first Brattleboro record in 2001, the Red-bellied Woodpecker has spread rapidly throughout Vermont. The five year survey of breeding birds by the Vermont Breeding Bird Atlas confirmed the species as nesting in widely scattered locations across the state. It is now expanding from the warmer valleys, such as the Connecticut River valley, and colonizing outward and upward. I anticipate it will be nesting soon, perhaps this year, in my South Newfane neighborhood. From atop Newfane Hill, several hundred feet higher in elevation, a friend has reported occasional visits from a Red-bellied Woodpecker.

A couple of musings about the establishment of the Red-bellied Woodpecker as a Vermont bird. When Forbush, the late 19th early 20th century Massachusetts naturalist, reported the presence of a new species, he did it with the bird in hand - literally. Scientific documentation used a shot-gun to collect physical specimens to prove visual observations. The irony is that the presence of a rare species could only be proven by killing the bird. As though the rare species or wandering vagrant did not have enough problems, it had to elude a gun-toting naturalist intent on proving the bird had been truly, and fatally, present. Today digital cameras, video recorders, and even cell phones can provide the necessary proof. The bird continues to live, and the rest of us have the opportunity to enjoy it. 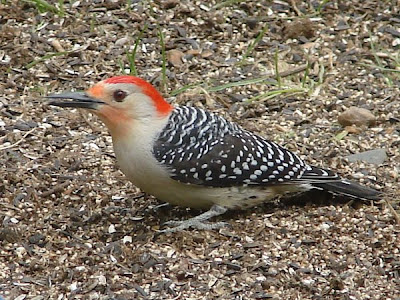 More important are questions as to why the Red-bellied is extending its range northward, even into an area where historically it has never before been present. Does it have to do with the return of forests to New England? Does this new forest, different from the virgin forests of a couple of centuries ago, now provide a welcoming habitat? Is it moving into and filling an ecological void? Is the expansion of the Red-bellied Woodpecker in New England another sign of milder climate?

Backyard birdwatchers and citizen scientists provide important observations and data. It was, after all, a backyard birdwatcher who scooped the experts on Vermont’s first nesting record for the Red-bellied Woodpecker in 2001. A Red-bellied Woodpecker at a backyard feeder is now rather old news. Nevertheless if one comes to your feeder for the first time, it will be exciting new news for you.

Email ThisBlogThis!Share to TwitterShare to FacebookShare to Pinterest
Posted by Chris Petrak at 6:00 AM
Labels: Red-bellied Woodpecker

I failed to mention my location. Castleton,VT. Former "Flatlander". "We can't help where we are born, but we can move to where we "live"!"

Just spotted and photographed a female red-bellied woodpecker at our feeder here, a tad west of East Hardwick, VT. First time I've ever seen one. (And we have a pair of cardinals this year, for the first time, too, since we've been here, which is going on 17 years now. The male was around all winter baching it, and a female finally showed up about three weeks ago.) It was good to see a fourth type of woodpecker here, in addition to the downy, the hairy, and the pileated.

10 years later but.... had a red belied on my feeder eating suet today. Cooper Hill Inn at 2300 feet in East Dover, Vermont.

Saw one this morning in N Bennington VT in my backyard.

I’ve seen a female one at my suet block several times now. I am in Westminster West