I searched the edges of the marshy pond, hoping that a secretive bittern or rail might emerge for some meal and give a glimpse - or that a duck might slip out of the reeds for a late day dabble - or that a Solitary Sandpiper or some tiny peep might be working along the muddy flats. Away from any traffic noise, only persistent bird songs broke the silence of the evening - blackbirds clinging to a tall reed, flashing red epaulets, and rasping their harsh phrases - Song Sparrows climbing out of the thicket to trill - Marsh Wrens clinging splay-legged to grasses and tumbling forth their jumbled notes. In the golden glow of the late day sun, life was rushing toward the enforced rest of the brief night.

Overhead a large bird circled the pond. Its long pointed wings and sleek body were patterned in brown and white. It dipped lower, flushing a pair of Mallards and sending a dozen small sandpipers into the air. They were in no danger from this large hunter, though for small birds who are in the middle of the food chain and hence food for many larger birds, it is always prudent to see danger everywhere and flee. Were they to tarry for evaluation of risk on too many occasions, they would greatly increase their risk of being someone’s dinner. 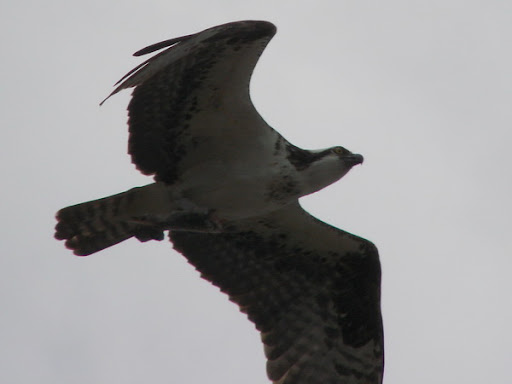 The big bird kited above the pond, its long powerful wings holding it in one spot. Though as big, or bigger, than many of the predators that posed true danger to the ducks and shorebirds that had scattered, it had no interest in them. He was the fish hawk, and he was fishing - looking into the pond waters for a fish just beneath the surface.

I watched as he trolled the pond forty feet above its surface. Then he hovered, a slightly more prolonged hover. Wings pulled in, canceling all lift, and the bird plunged feet first toward the pond surface with a controlled plummet. Water splashed as he struck the calm surface and half disappeared. His long wings pulled him back to the surface, then heavily lifted him into the air. His talons gripped a fish. He rose a hundred feet above the pond, maneuvering the fish as he climbed so that its head pointed forward. With this aerodynamic adjustment, he flew toward a distant platform. In my binoculars, I could just see the huge mass of sticks that comprised his nest and the tiny spot of his mate’s head. She was patiently incubating while he was bringing them dinner.

“As is the osprey to the fish, who takes it by sovereignty of nature.” So wrote Shakespeare in Coriolanus. The Osprey is the fish hawk. It is found almost everywhere in the world along coastlines, lakes, and rivers.

One of my earliest sightings of the Osprey was in a tall spruce in Glacier National Park in northern Montana. A bulky nest filled the top of a spruce. Not far off were the open waters of glacial lakes where it fished. 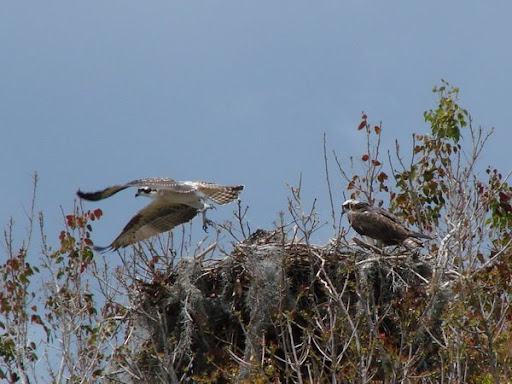 Osprey nest in many places around our state. All along the Atlantic Coast, Osprey are nesting. Visit any spot where there is a modicum of conservation concern, and you will see Osprey, and in some places, you will see many of these magnificent birds. Around Flamingo in the Florida Everglades last spring, Osprey verged on the abundant. Last summer in a park near the harbor in downtown Hyannis, Massachusetts, I watched young Osprey calling for food from their nest in a radio tower. On my trip to southern New Jersey last week, Osprey were common on the many nesting towers in the tidal marshes and salt marshes.

This is a big change from just a few years ago. Widespread use of DDT and other pesticides accumulated in the food chain. Large birds of prey, like the Osprey, nested. But the pesticides caused thin egg shells, and failure to hatch. Osprey numbers plummeted to endangered status. In 1972, DDT was banned in North America and the long road to recovery began. 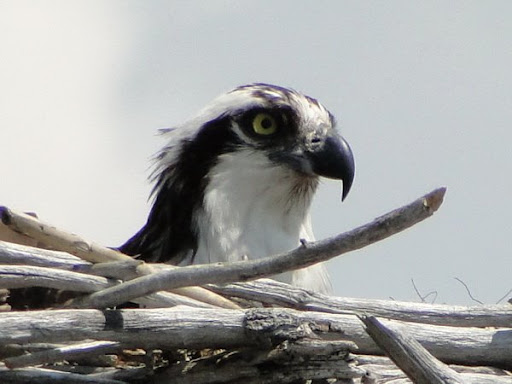 We lived along the Delaware River in eastern Pennsylvania. A biologist at a local university established an Osprey hack box program along the river. Underpaid and unpaid students hand fed Osprey hatchlings and chicks in an effort to reintroduce them along the river. It worked. It worked there as it worked in many other localities and for other species, notably the Bald Eagle and Peregrine Falcon.

The warning bells were sounded in time. The danger was removed. Protective measures were put in place. Conservationists and wildlife managers provided assistance, and the birds did the rest. Humans certainly screw up the environment for many species, including our own. But I am not a hand-wringing doomsayer. We can catch our mistakes and correct them. And then nature can take over.

Just north of Atlantic City, New Jersey, is the Brigantine unit of the Forsyth National Wildlife Refuge. An eight mile loop drive gives access to the managed pools, and tidal salt marshes of a small portion of the refuge. Nesting platforms for the Osprey have been erected throughout the tidal marshes. In the Spring, I have watched Osprey as they have returned from the wintering grounds to reestablish the bond with their mate from the previous year. Their high-pitched whistling call announces their return and signals to last year’s mate, or if she/he has not survived the winter, calls for a new mate. I have watched the courtship flights, and in mid-May have counted the number of occupied nests.

Last week about halfway along the drive, I noticed that a new nest platform has been erected; its wood was unweathered. It was fairly close to the road. There was a nest on the platform, a jumble of sticks. But it was a small nest - not the huge conglomeration that results from year after year of additions and remodeling.

An Osprey was on the platform’s perch. A second bird flew low over the mud flats and marsh, but not the way it would circle and fly if it were hunting. It landed on a distant grassy patch, then flew again and circled until it was on a course for the platform. The Osprey carried weeds and grasses in its talons to line the nest. 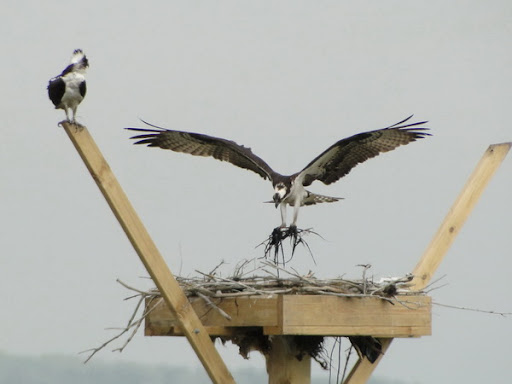 A new nest platform with a newly bonded pair of young Osprey: they were setting up housekeeping for the first time. It’s a joint project by both birds. But it looked like the one who brought the soft material to line the stick nest was the female; she was larger than the bird watching from the perch. She deposited the grasses, and arranged them, then looked up at her mate as though to say, “That’s how its done. Now you can help.”

The Osprey has made a remarkable recovery. In some places it can be designated, “common,” a bird you are certain to see at the right time of year. But the Osprey is never a common bird. Always the Osprey is magnificent and regal - a thrill to watch as it flies steadily through heavy wind, as it circles and hovers on long wings.

Another wonderfully illustrated and informative post. The Osprey represents a success story. This world would have been a much poorer place if we lost them.

Chris,
This is just excellent. A wonderful post with lots of info and beeautiful shots. Thanks a lot.
have a nice week end,
Chris.

Fascinating info and the photos are breath taking!