Sitting on the Rail 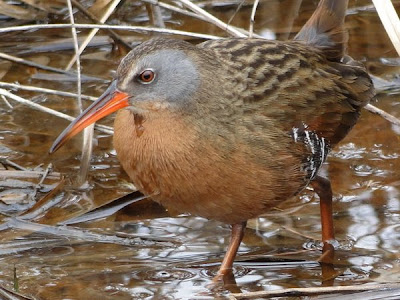 Birdwatching by sitting - or the elusive Virginia Rail. Which should I write about this week? I’m caught in indecision, so I’ll write about both.

Sitting, as a bird watching topic, was prompted by these few sentences from “Birder’s World,” June, 2009. The author wrote: “I have read (and written) scores of unsuccessful trip reports that begin with, ‘We walked all over the place and didn’t see a single warbler!’ The problem? The word walked.”

Simply put, when you walk through any bird habitat, even a concrete downtown, you are invading the territory of the birds, and they are going to become wary, head for cover, fall silent. When you go out to fill your feeder in the morning, have you ever had a healthy bird stay on that feeder and chat with you while you are there? A few people, through patience, may patiently train a bird - like a chickadee - to feed from the hand. But even the common feeder birders accustomed to human presence flee at your first appearance. The pigeons in my backyard - feral descendants of domestic birds - take flight when I step out. Get too close to them in an urban park, and they fly - not far, perhaps, but they do move off.

Why should it be any different when we walk through the woods, or along a hedge row, or through a field or marsh? Something big is invading a bird’s habitat, and the first reaction, by the bird, is likely to be concern.

My spouse and I have a fundamental incompatibility when we are in the woods. She wants to walk! - arms swinging, heart rate rising, miles accumulating. I want to creep, stand, sit. She goes out ahead, and I complain that she’s scaring the bird. “But I thought we were going for a walk,” she protests.

I retort, “We are on a bird walk. That means we can’t walk.” I can tell she does not buy my line.

Go slow. Stand still. Sit. Listen. Eventually those birds who have been invaded will calm down. You may hear a “chip,” or a song. Even if you don’t know what bird is chipping or what bird is singing, you will know that a bird is near at hand, and you can look for it. I guarantee that you will see more birds by making sitting a bigger component of a bird walk, than if you walk all the time pausing only when something flies nearby.

When you are on a bird walk and really want to see birds - don’t walk. And as important, don’t talk - whisper if you must.

Case in point. I went on the early morning bird walk which kicks off the Herrick’s Cove Wildlife Festival and afterward wandered the exhibits. There were good birds - though, frankly, too many people for a lot of good birds. More important on this day, there were friends, and good people, and lots of interest in wildlife, and birds, and nature.

Afterwards, on the way home, I stopped by Allen’s Marsh in Westminster. Walking along the road, I thought I saw a slight movement of marsh grasses, and I thought I heard something accompanying the movement. I stood still, but heard and saw nothing. 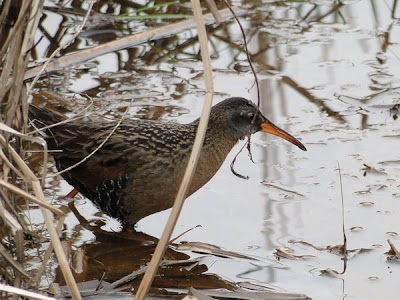 About to move on, I thought I saw and heard the same thing again. I stood still and looked intently. A couple more minutes, and I thought I heard a couple of call notes which I thought might be from a Virginia Rail, though I have thought wrong on many previous occasions. I continued to look intently.

A couple more minutes, and I thought I saw movement behind a clump of marsh grass, and whispered to my spouse. Indeed, a few moments later a Virginia Rail stepped from behind the clump, paused, probed with its beak, and moved on behind another clump. Then it reemerged, and gave both of us a stunning view of this secretive bird. Standing quietly next to me, she said, “What a beautiful little bird! I’ve never seen one before.”

Rails are notoriously secretive and hard to see birds. There are two rails that inhabit our marshes: the Sora and the Virginia Rail. Both are quite common, and often inhabit the same marsh. For most people, seeing one of these rails is sheer serendipity. It flies up, drops down, and disappears. It steps into the open at just the right time. It leads its downy chicks across a road just as you are passing by.

But enough is enough. My dear spouse much prefers to search a green house nursery than a mucky marsh, so off she went. I chose to sit on the dry berm of the road and gaze intently at the nearby marsh grasses. 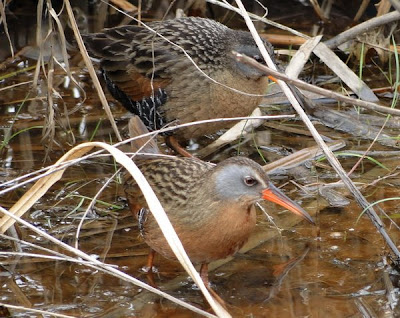 After several minutes, I heard the descending wenk-wenk-wenk-wenk-wenk that passes for the Virginia Rail’s courtship song. From a second place, I heard an answering “song.” Were they two competing males vying for a female’s attention, or a male and female finding where the other was hidden?

I continued sitting. The rails called back and forth. Then one stepped into open water between clumps of grass. To the right, a second stepped into the open. There appeared to be some interaction, more akin to a tentative trial between the sexes than a testosterone standoff.

I sat. I watched. The two Virginia Rails explored their little marsh corner and foraged. I photographed them, with excellent results. After a few more minutes they disappeared into the marsh vegetation. There was no further sign or sound of their movement. 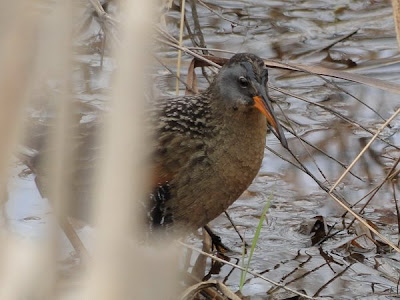 This disappearing act accounts for the phrase, “thin as a rail.” Audubon writes that like other rail species, “the Virginia Rail has the power of contracting its body to enable it to pass with more ease between the stalks of strong grasses and other plants.”

One of my goals for this year was to see our resident rails and get photographs - not an easy or certain undertaking. On this early occasion, I was successful by employing the bird walk technique of sitting. 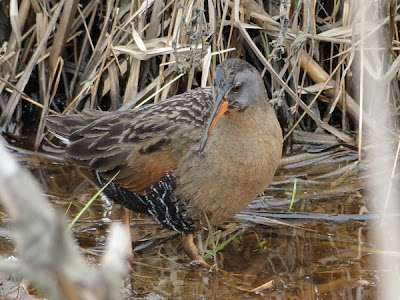 Email ThisBlogThis!Share to TwitterShare to FacebookShare to Pinterest
Posted by Chris Petrak at 6:00 AM
Labels: Virginia Rail

An Audubon worker at a local WMA gave me a clue of where to find these birds.
When time permits, I'll have to get up early and try to capture them.
You captured them wonderfully.

...wonderful post, and your photos are beautiful! I do a lot of sitting when I'm birding. When I'm still, something interesting always seem to come into view.

WOW these photos are awesome! I looked and saw you live in Vermont. My family has a cabin in Chester Vermont. Its right outside of springfield. I am going up there in two weeks and hoping to get some sweet birds!

Very good advice and wonderful Virginia Rail shots. As you say, these are not easy birds to see. My only Sora sightings were at dusk!

LOL..I can relate to your wife. I had a post a while back..

"Birding and Exercise do not mix" http://is.gd/yDAm
I love to hike and exercise....my husband and I would head out with binos and say we are going for an exercise walk..well you know how that goes..DO NOT MIX Birds and exercise.
That said..I can still relate to your wife..I was always ahead of my husband when birding..waiting to hear the next bird, see the next bird.
Recently I purchased the Canon with the 20x zoom..I have slowed down tremendously..
trying to get good shots of birds,flowers,bugs...I notice things i most likely would not have seen before.
So maybe...get your hunny a nice camera..with a good zoom...it might just slow her down.

Gorgeous Virginia Rail pictures!!! I can't believe the close ups you got. It makes me want to see them even more!

I like to hike and get my heart rate up, but I also like to stand still and just bird. I have found that birding has helped me to lose a few pounds so even simple movement burns those colories. Another plus for birding!