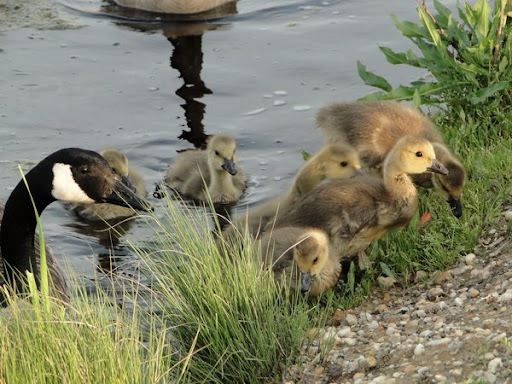 I watched as my friend scattered corn for the family of Canada Geese. There was mom and dad and five goslings already approaching their parents in size. Jokingly and flippantly I said something like: “Fattening up the tender goslings for your Christmas dinner.”

He shot me daggers. He did not think that was the least bit funny. This pair of geese returned year after year to his farm pond. They were dearly loved pets, and you don’t joke about dining on your pets.

In half a dozen places around the county, I have seen home-made road side signs cautioning drivers in some way about the goose crossing - usually with a graphic of parent geese leading their line of young.

Young goslings are admittedly very cute. It is almost impossible not to say, “Ahhh, aren’t they adorable,” when you see them scrambling after an adult goose.

The protective attentiveness of parent geese to their young is commendable, and very effective. If you don’t pay too close attention, goose parenting could provide fodder for the family-value moralists. But if you do pay attention, you might ask why a pair of geese are protecting a dozen or more goslings when they normally lay only six eggs. 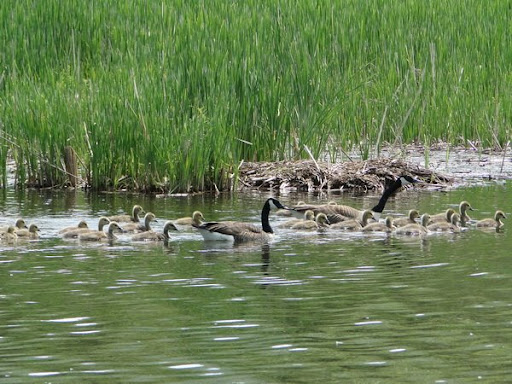 Just a few days ago in the Retreat Meadows, I watched two adult geese leading twenty-eight goslings; I was able to count the moving number only when I had my photograph on the monitor so that the birds stayed still. Behind that group came another pair of adults leading sixteen youngsters. These were only two of the gosling collections scattered around those waters.

A friend on Newfane Hill wondered why the nesting geese and all of their recently hatched young disappear after a couple of days. Did snapping turtles grab all of the young, leaving the adults to fly off? Or is something else happening? A farm pond in Brookline has one nesting pair of geese, but through the summer, several families use the pond and farm fields to raise their young. Where did the other families come from?

Canada Geese have become so common, that I could elicit many reports of geese families that disappear from small ponds, or of larger ponds and bogs that host several grazing families and many goslings. But what’s happening?

The Canada Goose (she is a goose, he is a gander) lays a big egg - about 3 inches in length. Physiologically, she is designed to incubate six eggs. If there are more than six eggs in a nest, it may be due to another goose having dumped an egg in her nest. The large, nutrient rich eggs of the Canada Goose result in “precocial” hatchlings - they are relatively well-developed, have a thick coat of natal down, and are able to feed themselves almost immediately. Parents show their young what to eat and watch out for dangers. Parenting of precocial young is relatively easy. By contrast, songbird hatchlings are altricial - helpless, naked, eyes closed, and totally dependent upon their parents. Parenting of altricial young is hard work.

The parenting of a dozen young goslings is relatively easy, since they can feed themselves. But a typical clutch of eggs is only six. What’s going on in goose society?

Bern Heinrich (The Geese of Beaver Bog) noticed that his pair of Canada Geese disappeared with their six hatchlings after only a couple of days. Curious, observant, tenacious (he made notes for several years) and a little lucky, he discovered that his pair had led their hatchlings through the woods to another larger pond with good grazing fields where they joined the resident breeders of that pond. The new pond was about three miles from his beaver bog. Other pairs also came to the new pond. 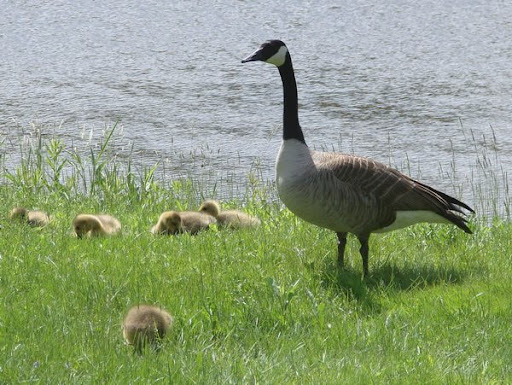 At the new pond, other goose dynamics took over. The six goslings of Heinrich’s pair were adopted by the resident geese, and his pair returned to his beaver bog. They stayed for a while, then probably flew north to Quebec where they joined other geese on a “molting” territory where numbers and remoteness would protect them during their summer feather molt when they are unable to fly.

Meanwhile, the resident pair successfully protected their own six goslings and their six adopted goslings - this in spite of the fact that their favorite grazing field was also the home of a red fox. The ever-alert gander warned off the red fox, and the fox wisely decided not to challenge his powerful beak or wings.

Hatchling geese imprint on what they first see and follow that form. Hence, when they see their parents at hatching, they imprint on them and follow them through the woods. But it seems that imprinting on specific individuals of that form takes place a few days later. If they are in the presence of other adults, they may imprint on those adults, rather than their hatch parents. Since all they need is some protection and leadership, it is not a big burden to the adoptive parents. They can guard a dozen as easily as they can guard half a dozen - or, given what I saw in the Retreat Meadows, two dozen.

But why do these adoptions occur in the first place? One would think that the parents would have a genetic self interest in staying with and protecting their own offspring. 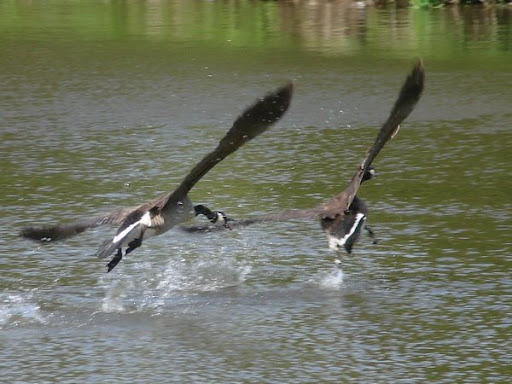 There are probably several explanations, but protecting turf from outsiders seems to be one factor. John Anderson has been watching the resident geese on Sunset Lake for many years. A couple of years ago, two pair nested and hatched young. Not long after the hatching, he watched the resident gander attack the second gander who had had the gall to intrude on his lake. This was not a wing-flapping, goose-hissing confrontation, but an out and out physical fight. The second pair of adults left, and the resident pair adopted their goslings. (It seems that we aren’t the only species that tries to guard its borders and keep others out.)

Canada Geese are longed lived, perhaps twenty or more years. They usually begin breeding in their third year and have a strong fidelity to their nesting territory, returning to the same place year after year. If they have friendly human neighbors, they will establish neighborly relations. A friend has scattered corn for the resident pair at his camp for many years. One summer, he got a new truck. When the road finally opened in the spring, he drove in to the camp. He saw a pair of geese at one end of the lake. By the time he got to his camp half-way down the small lake, the pair was waiting for him and his corn. They not only remembered him - they remembered his new truck.

Canada Geese have become so familiar that it is easy to overlook their fascinating complexity. They have society and culture, loves and hates, just as we do.

For more on the Canada Goose, see Bern Heinrich, “The Geese of Beaver Bog,” 2004. Thanks to John Anderson for sharing his careful observations.

"The second pair of adults left, and the resident pair adopted their goslings."

Wow. That is brutal. I had no idea.

Fascinating information! I posted about Canada Geese too today and about how they goslings are tagging along w/ a Graylag. The imprinting makes sense after reading your blog entry. A woman who lives near the pond told me the Graylag was its mother but that didn't make sense and after reading this I am doubting it even more. PLUS your photos vs mine look identical as far as field marks of CG goslings are concerned.

Fantastic post!! So much information and so interesting. I learned a lot. I love the photo of the parents with all their adoptive wards. What a sight it must have been to see 28 babies with two adults.

Hi from Portage la Prairie, Manitoba, Canada. We live on an oxbow with resident Canada geese. Last year one pair raised 13 goslings and this spring there is a pair with an increasing number of young. This morining I counted 43 goslings with 2 adults, while the other families looked healthy and happy. I've never seen such a large family. Is this the same pair of adults from last year? Is there some kind of record family size?