Progress of the Breeding Season

My intended hike up Stratton Mountain this morning was canceled due to the unsettled weather. I've rescheduled to Wednesday AM. Most of those planning to join me have can do the change, but if a couple more would like to join, let me know. We meet at 6:15am at the trailhead - early start so that (hopefully) Bicknell's Thrush will still be singing when we reach the top. Also likely - Yellow-bellied Flycatcher, Blackpoll Warbler, plus other edge, woodland, and montane species. So instead of hiking 3.5 miles this morning, I am revisiting the birding of the last week (inbetween the rain).

The male Ruby-throated Hummingbird makes regular visits to the feeders while patrolling his domain. He makes only one contribution to the next generation, albeit an important one. Occassionally a female sneaks past his guard and feeds on the columbine or the nectar provided by my bounty. 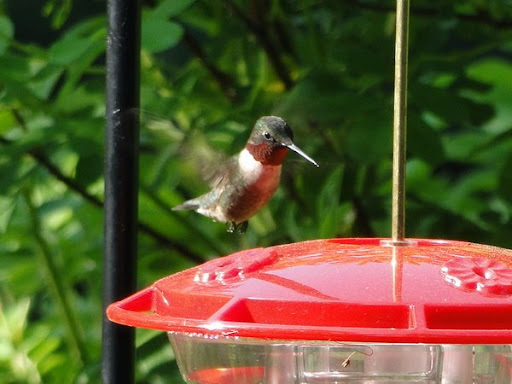 Cedar Waxwings flocks seem everywhere. Most are still a few weeks from nesting. 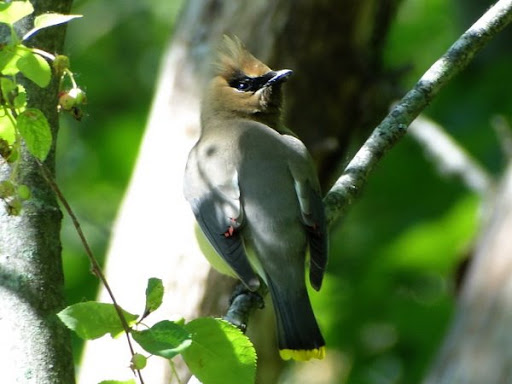 Red-eyed Vireos are lactive into their breeding season. Males sing in between their nesting responsibilities and occasionally one even has allowed me a brief glimpse. 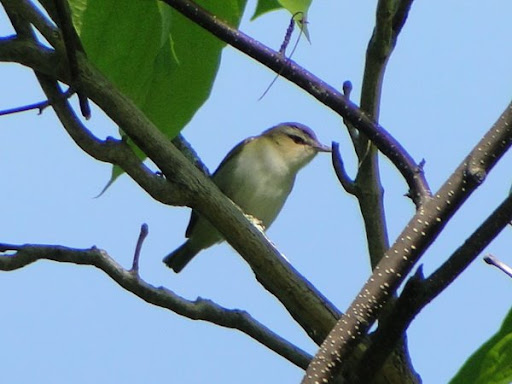 Some American Robin pairs are close to fledging their first brood. I have no idea if this one was building a first or second nest for the season, but was certainly busy in construction. The bird made regular trips to the muddy edge of Herrick's Cove, returning with big loads of building materials. Nest was somewhere in a dense tangle of brush roses. 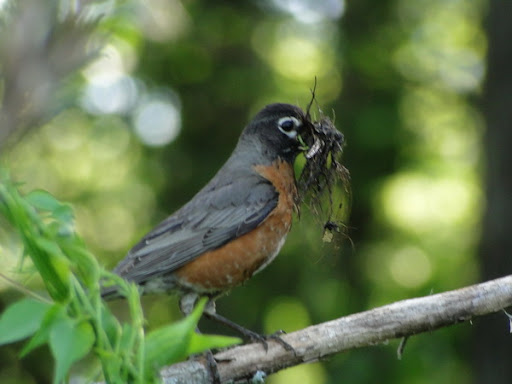 After a couple of days of rain, I returned to where I had seen the Blue-headed Vireos in the early stages of nest building. There was no sign of the pair, but the nest appears ready for occupancy, and perhaps deep in the nest, incubation is proceeding. The bottom of the nest is comprised of wood chips and wood shavings. A couple hundred yards away I saw an old tree which had been heavily worked by Pileated Woodpecker, perhaps excavating a nest hole. A Blue-headed Vireo was carrying wood chips. They were singing in many places along the old road, so I can't claim it was "my" pair. Clearly the nest building activity of one species was assisting the nest building activity of another species. 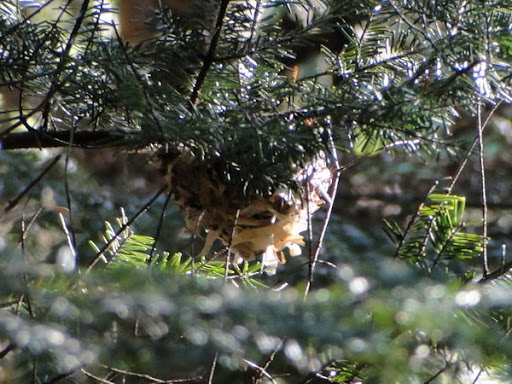 American Crows are nesting down river from my home. Evidence suggests a pair and a helper, since 3 are often around the feeders. This one is "carrying" food - note the bulge in its crop. I have seen the crop much larger. They are very wary birds able to sense when someone is inside watching them. It is difficult to get close to the window for a photo without having them fly off. 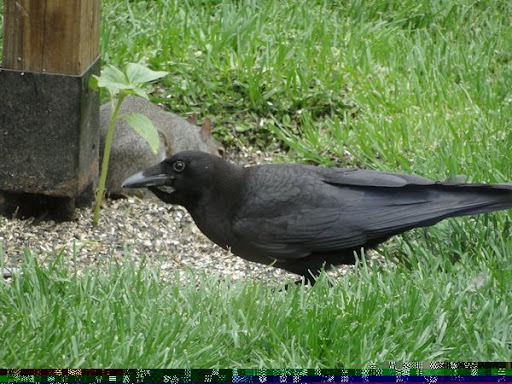 The Eastern Phoebes at Herrick's Cove fledged their first brood at least a week ago. The youngster is here waiting for another meal, but occasionally tried some things on his own. 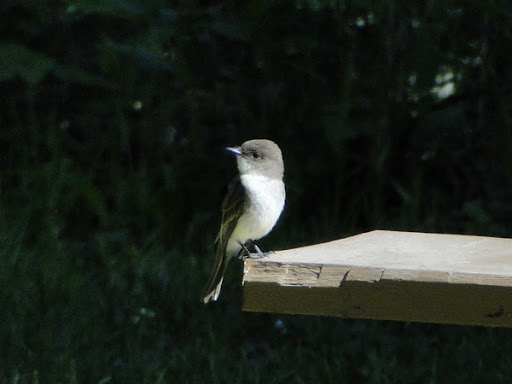 I have been astounded at how much suet is being consumed by the birds. At least two pair of Downy Woodpeckers, one pair of Hairy, and two pair of starlings seem to be relying on the suet for feeding their nestlings. Plus a wide assortment of other birds are also using the suet. The suet gets taken in at night. In the morning the woodpeckers are lined up on the tree waiting for us to bring it out.

The European Starling brought the fledglings to the suet this week. We typically say, "aww, cute," when other birds bring the young to the feeders, but respond with "oh ugh" when the starlings do the same. I would suggest that is not evidence of birdy cuteness, but human prejudice. 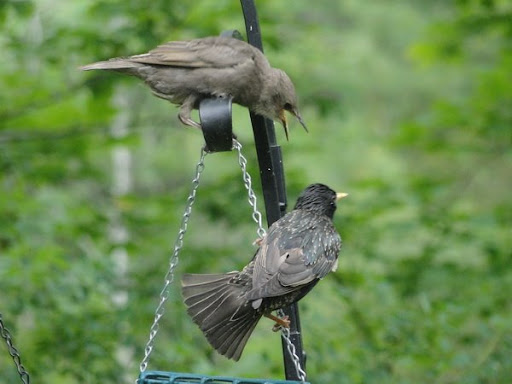 Fledgling Downy Woodpeckers were at the suet this morning. At one time, there were five Downies, from two families - all female. The youngster is clinging to the post; its understanding of life is that someone will feed. Well, for a while someone will. 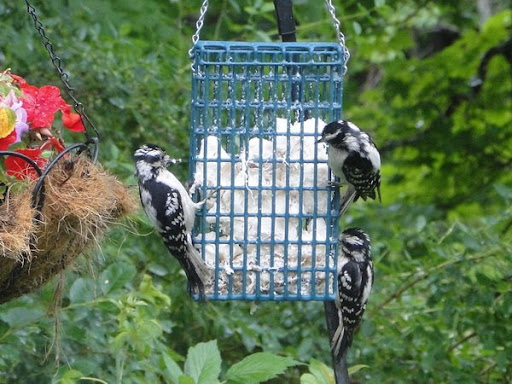 What incredible pictures! You are very good at this - and I'm heading out for suet right now!

Hi Chris,
Well well, you got two of my favorite birds there. The first are the waxings. I love these guy being cedar or bohemian, though I only saw the latest. I've seen hummingbirds in Chile and I loved them too, but they are moving so fast! Well done, in all, this is a very nice post, with beautiful pictures.