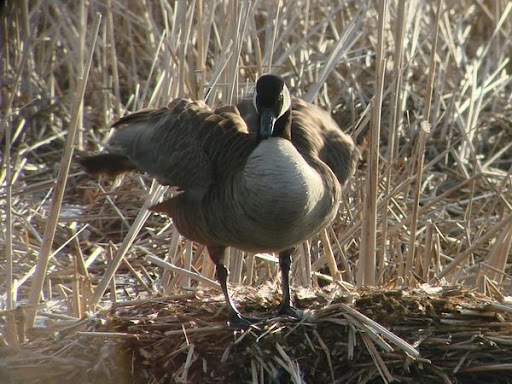 The Canada Goose used to be the forerunner of winter and the harbinger or spring. Not anymore.

Edward Forbush in A Natural History of American Birds, 1925, described the reaction of people to the “flying wedge” of Canada Geese which “brings to all who see or hear the promise of another spring. The farmer stops his team to gaze; the blacksmith leaves his forge to listen as that far-carrying clamor falls upon the ear; children leave their play and eagerly point to the sky where the feathered denizens of the northern wilderness press steadily on toward the pole, babbling of the coming of spring .... Coming after the long, cold winter, not even the first call of the bluebird so stirs the blood of the listener.”

Forbush wrote when most Canada Geese still migrated to and from their breeding grounds, and when those breeding grounds were mostly north of the U.S. - Canadian border. He described it as “a distinctly American bird.”

A combination of factors has contributed to Canada Geese becoming so common and widespread that some birders now refer to them as “pond starlings,” an unflattering comparison to the European Starling which is an introduced species whose abundance, habits, and characteristics makes it a pest bordering on a pestilence.

In the case of the Canada Goose, native intelligence and adaptability has combined with human ineptitude to create a population explosion and a goose-human conflict.

Habitat loss and over-hunting caused the population of Canada Geese to hit a low point in the 1920s and 1930s. Over a period of years, a variety of steps were taken which created the situation which we have today. 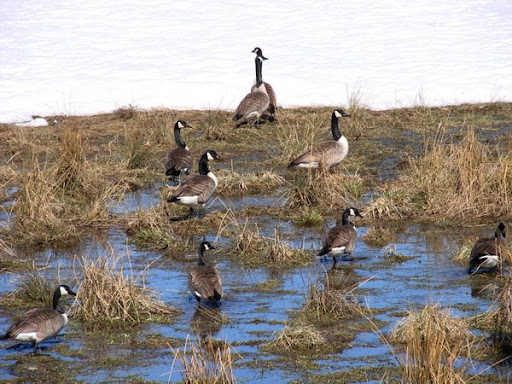 Unlike many species, migration among Canada Geese is a learned trait, not an inherited trait. Some species of shore birds, for example, hatch their young, and then the adults head south. Some time later, the first year birds make their own way to the same wintering grounds to which their parents flew. Clearly, migration for these birds is encoded in their genes.

But this is not the case with Canada Geese. The geese “learn” to migrate, and when the opportunity presents itself, they “relearn” their migration. Scott Weidensaul (in Living on the Wind, 1999) describes how “wildlife management” effected geese migration: “Canada Geese from the central Arctic always wintered along the lower Mississippi, but in 1927 the state of Illinois converted thousands of acres of rich bottomland into a waterfowl refuge; within a few years, half of the geese on the central flyway were stopping there instead of continuing south. Then in 1941, the federal government opened the enormous Horicon National Wildlife Refuge even farther north, in Wisconsin, employing the same mix of ponds, lakes, and crops to shortstop the fickle geese that so recently had favored Illinois. The original migration to Louisiana and Arkansas, meanwhile, had dried up ....” With food available, the geese did not have to make the long, arduous flight. 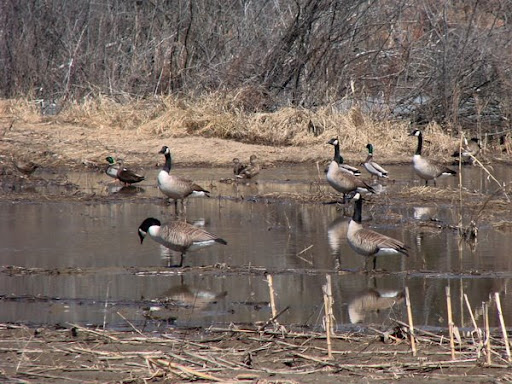 But the elevation of the Canada Goose to “pond starling” status really began in the 1960s and 1970s. The intent was to restore the species to the wildlife refuges and establish it in parks. Wing-clipped geese were introduced for this purpose. The effort was successful beyond all expectations, but ... the new populations of geese were non-migratory. The original wing-clipped birds couldn’t migrate; their offspring and the succeeding generations never learned to migrate, and the adaptability of the species precluded the need to migrate. In Pennsylvania, for example, there were historically no breeding Canada Geese. During the 1990s, the permanent, non-migratory population of Canada Geese in that state grew to in excess of 200,000 birds.

Again, Weidensaul: “What had started as small, picturesque flocks in widely scattered locations became larger, messier, more widespread, until by the 1990s it was hard to find a body of water without geese. The resident population in the East ... has been growing at the light-speed rate of 17 percent a year since the late 1980s ....”

Meanwhile, the number of breeding pairs in the Atlantic population in northern Quebec plummeted, causing the U.S. Fish and Wildlife Service to close Fall Canada Goose hunting in order to preserve the breeding population. This in turn has had economic repercussions and has disabled efforts at controlling the non-migratory goose population.

The explosion of the Canada Goose population also has a negative effect on other waterfowl species. Their size and aggressiveness drives away other nesting ducks. The beaver pond near my home has had no nesting Wood Ducks or Mallards for the last three years. Instead, Canada Geese have laid claim to the pond. 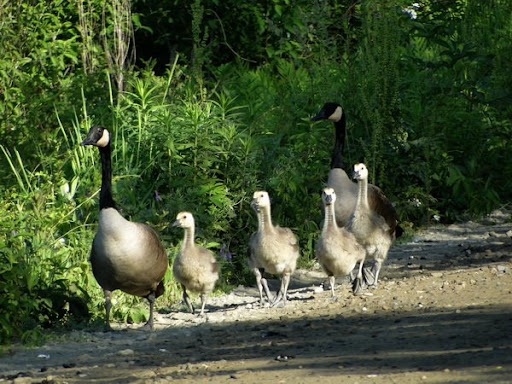 The Putney Mountain Hawk Watch often sees the “v” formation of geese overhead, occasionally with snow geese mixed in. These are probably birds from the Canadian north who are migrating south for the winter. On the other hand, most of the several hundred Canada Geese typically counted during Christmas Bird Count in the Brattleboro area are probably non-migratory birds. They have never learned to migrate, and when the water is open and the ground is free of snow, they can find ample food.

Canada Geese, like the European Starling, are not indicators of good birding. Rather they are reminders of humanly induced environmental havoc.

I remember in my youth in the 60’s and 70’s growing up on Lake St. Catherine, the excitement of geese flying over during migration. Everyone stopped and looked. Now having lived in L.A. and Boulder, CO, I’ve seen enough Canada Geese. It’s sad because they are really great birds, but now they are pond starlings, golf course starlings, park starlings…..

Hi Chris,
This is very impressive....A quite good numbers of them.. Will be the them here, but with greylag!

yeah... pond starlings! Great info on both this and the raven! thx

Hey there Chris! Thanks for the comment on my blog. I tried emailing you directions but my email is not functioning properly at this time.

Here is a link for MassBird that will give you some info on where you can locate the Henslow's Sparrow. I hope this helps and good luck. If you go tomorrow there is a very good chance you will get it.

I live in northern Wisconsin, and am pleased to say that we still experience the migratory patterns and I still look up every time that I hear them flying overhead, both Spring and Fall. They also frequent our farm fields during the migration, but are not yet pests. The most unusual recollection I have of geese overhead was back in my post-Doc days in mid-Missouri. I regularly walked a mile back and forth to my lab at around 4:00am. One clear night, I heard a flock flying and reflexively looked up. It was the first and only time I have appreciated night light pollution, because there up above, wedging their way through the stars was the white V of goose bellies illuminated from below. I only saw it once, and still remember it after 20 years.

Wow! Very interesting. I didn't know about the wing-clipped geese. They definitely are pond starlings around here!