I have seen lots of new birds this month, birds that I have never seen before. But I am not adding them to my life list because they were outside of the United States. I have decided that I do not want to be a world birder. North America is enough of a venue for listing and occasional chasing. I have reached the point in my life where I do not need to see all of life’s variety and beauty, but what I do see, I want to enjoy and appreciate. 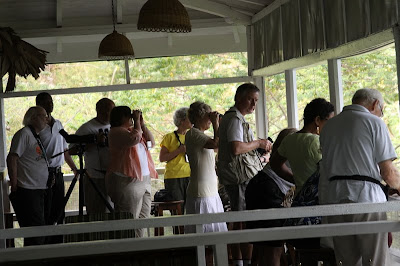 That’s what I did during the week I spent at the Asa Wright Nature Centre in the mountains of Trinidad, West Indies. Much of my time was spent on the open veranda looking down on the Centre’s array of bird feeders, scanning the canopy of the tropical rain forest, and checking the dead snags for a passing raptor, toucan, or parrot. Often I had to put down my binoculars or camera and lean back in order to focus my eyes on a hummingbird or honeycreeper that was drinking from one of the hummingbird feeders hanging from the wide eaves. These small birds were so close that I could have reached out my arm and touched them.

The birds were wary, but generally unconcerned by the close proximity of people. Some, like the ever-present Palm Tanager, flew through the open veranda, even venturing into the living room and down the hall of the big house. 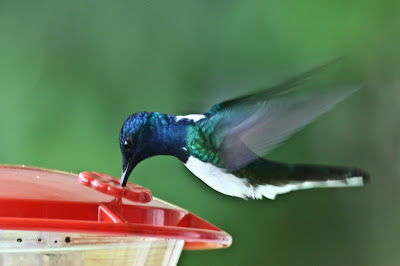 The White-necked Jacobin, a hummingbird about a third bigger than our Ruby-throated Hummingbird, was more concerned about patrolling his territory and protecting his feeder from other males of his species than he was about the human presence three feet from his favorite feeder. He had a lot of patrolling and protecting to do, and in spite of his hummingbird truculence, he was not equal to the task. Matures males, immature males, and females paused on branches, drank from the feeders, and visited blossom after blossom. There was so much activity that I never did figure out which male thought the territory was his, and his alone.

The Jacobin seemed to limit his territorial concern to others of his species. Not so the smaller Copper-rumped Hummingbird (about Ruby-throated size). He chased everything, from the diminutive Crested Coquette (the second smallest bird in the world) to the larger White-chested Emerald and Blue-chinned Sapphire. These latter names, by the way, capture the iridescence that flashes when these birds are in the sunlight the way a fine jewel might reflect that same sunlight. 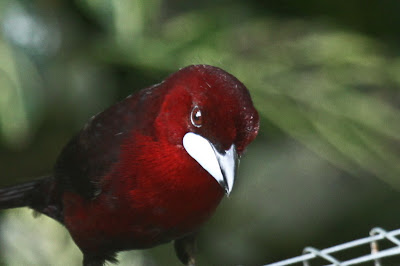 As captivating as the hummingbirds may have been, they were not the only performers on the stage. There were seven species of tanagers that worked the feeders or fed in the tree tops. Some - like the Silver-beaked Tanager with its brilliant silver beak and deep crimson plumage or the yellow, deep blue, and turquoise of the Turquoise Tanager - were simply breathtaking.

There were two species of mannakins - dumpy little birds that are known for their elaborate dances and courtship display. The Yellow-headed Mannakin concludes his courtship song with a Michael Jackson type of backward shuffle along a branch. He takes time to feed, but most of his day he spends in a lek with other males, perpetually singing and shuffling in demonstration of his superior qualities. We watched him feed from the veranda, and later watched him dance on his lek.

Then there were the trails. Wandering through several hundred acres of mountainous tropical forest, any moment might bring a movement, a blossom, a butterfly, a scurry, or a new call.

For over forty years, the Asa Wright Nature Centre (a not-for-profit NGO) has supported research, conservation, and education. The most visible portion is the former coffee and cocoa plantation house which is the visitors’ center and lodge and which provides most of the financial support for the organization. The Centre was doing eco-tourism long before the term came into general use.

We talked with friends and did internet research before deciding on Trinidad. Trinidad, just off the Venezuela coast, relies on oil and gas for its economy; it has not developed a Caribbean tourist industry, except for the Asa Wright Nature Centre which attracts mainly birders from around the world. As birdy as the Centre is, we met several couples with a non-birding spouse who was enraptured with the veranda entertainment.

Accommodations were not luxurious, but they were very comfortable and spotlessly clean.  Food at the Centre reflects the many cultures which contribute to modern Trinidad - Amerindian, Indian, French, creole. In the best British tradition, tea is served at 4pm, and from the West Indian tradition, rum punch is served at 6pm. Both are evidence that pockets of civilization still persist. 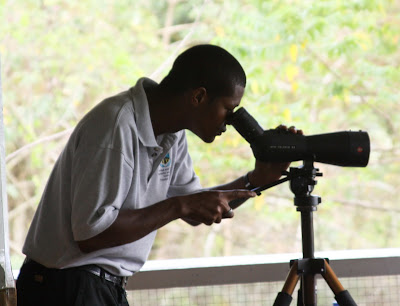 Many organized bird tours come to Asa Wright, often in combination with Tobago. We wanted a more relaxed experience and decided to visit as independent travelers, setting our own schedule. The Centre has its own staff of guides; we had two small-group guided walks on the grounds. There was always a guide/naturalist on the veranda to help with identifications and answer questions. The local guides, from an extended family of Indian origin, have a well-deserved world reputation for their knowledge of Trinidad’s birds and for their ability to find the birds that birders want to see. On two occasions we hired a local guide for trips to different habitats in the lowlands, including the Caroni Marsh where thousands of Scarlet Ibis turn the evening sky red as they come to their night roost.

This year’s winter birds on my backyard feeders have been loyal patrons, but like the Dark-eyed Junco, they have been mostly colorless, varying only in degrees of gray. So it was a delight to watch brightly colored birds, like the Purple Honeycreeper with the male’s rich, deep blue plumage, or the Green Honeycreeper with the male’s brilliant turquoise green body and bold black mask. The females of both species are stunningly beautiful in their own right with bright, warm, green plumage. 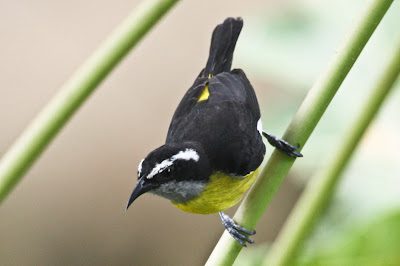 Of the thirty to forty birds which we watched just from the veranda, my favorite was the Bananaquit. It was also one of the most common. It has a shape similar to our Red-breasted Nuthatch, but at four inches, it is even smaller. It has a dark back and head with white spots and a white eye line, a gray throat, and a brilliant yellow breast. On the hummingbird feeders, it drank the sugar water and clung to the rim upside down as it gleaned insects. It fed on the bread and over ripe fruit on the platform feeders, and took nectar from flower cluster after flower cluster. It seldom gave ground to a larger bird, but occasionally mixed it up with another of its species. It was a captivating little bird.

Indeed, the whole show at Asa Wright was captivating. Except for the tick bites I collected, it was a delightful week.

And now ... I’m home and ready for the season of great birding.

Trinidad, and especially Asa Wright truly is a special place. You did a similar trip as Pamela and i did last year, and it seems like you had much the same experience that we did. I couldn't imagine time spent there as anything less than wonderful! Nice job with the write-up and photos!

What a great photo, the one with the little bird. Amazing!

hi Chris,
Superb post... I love the Silver-beaked Tanager, i think I would have preferred this one than the bananaquit ;-) its colors are brilliant and it is a beautiful bird!